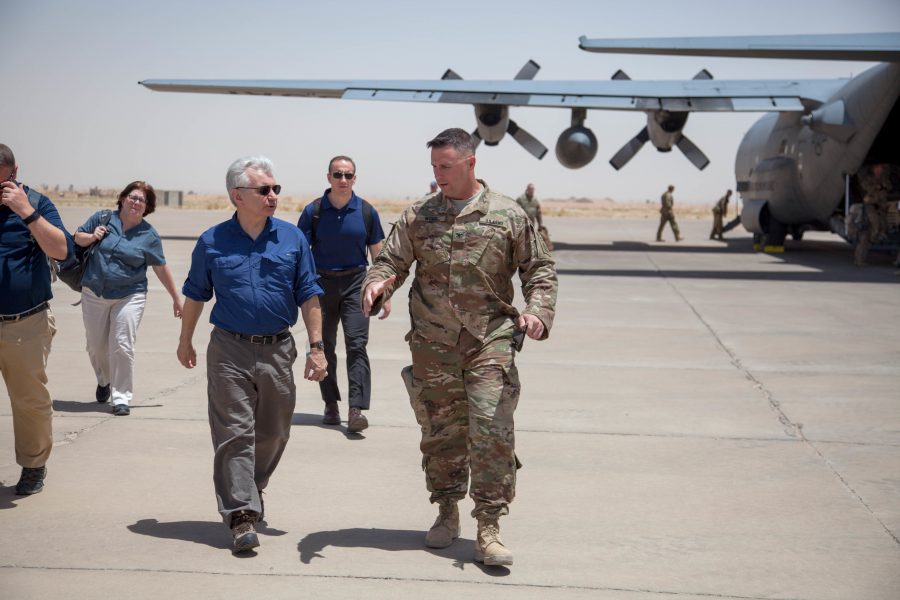 Democrats appear poised to run defense policy in both congressional chambers for the first time in 10 years, as the party has won control of the Senate with narrow victories in two Jan. 5 Georgia runoff races.

The Associated Press called the race for Democrat Rev. Raphael Warnock—the first Black man elected to the Senate in Georgia—over incumbent Republican Sen. Kelly Loeffler on Election Night. Democrat Jon Ossoff also won by less than 1 percent over incumbent GOP Sen. David Perdue, the AP said Jan. 6. Both won by larger margins than what is needed to trigger a recount.

That puts the Senate at a 50-50 split between the two major parties, but gives Democrats an upper hand with Vice President-elect Kamala Harris as a tiebreaker in their favor.

The results come at the end of a tumultuous election cycle that has handed Democrats unified control of the White House and Congress after a decade of split government. It’s a notable shift as the Pentagon prepares for stagnant budgets in part due to the coronavirus pandemic and an expected shift toward domestic priorities, and as the military plans for an era dominated by geopolitical conflict with Russia and China rather than counterterrorism operations.

Experts anticipate the Senate flip will be much more consequential for domestic policy than defense issues.

“I think everyone recognizes that DOD can be much more efficient, that we have to start making really tough decisions about which legacy systems get carried on, about how we do modernization and how we jump over our peer competitors in terms of technology, not just sort of keep up with them,” said Sen. Jack Reed (D-R.I.), according to a recent Defense News profile.

As Senate leadership changes hands, so will that of its committees. Reed appears set to take the helm of the Senate Armed Services Committee—the first Democrat to do so since former Michigan Sen. Carl Levin retired six years ago.

Reed, a quiet Army veteran who has represented Rhode Island in the Senate since 1996, has served as SASC ranking member since 2015. That’s made him the left-leaning, consensus-seeking foil to the late Chairman Sen. John McCain (R-Ariz.) and Sen. Jim Inhofe (R-Okla.), the current chairman.

He’ll have an ally in Rep. Adam Smith (D-Wash.), who heads the House Armed Services Committee in a chamber where Democrats lead by about a dozen seats.

It’s unclear if Reed would take over as chairman before the two new Georgia senators are seated or whether the committee will be evenly split like the Senate. Reed could be less inclined to stick to the status quo than Inhofe, but there will be more continuity than change on SASC, said Todd Harrison, director of the Aerospace Security Project at the Center for Strategic and International Studies.

“Neither of them are mavericks like McCain,” Harrison added.

SASC is also saying goodbye to three members in the new year: Perdue and former Sens. Martha McSally (R-Ariz.) and Doug Jones (D-Ala.), who lost their general election races. For aerospace, Perdue has been particularly vocal on Robins Air Force Base, Ga., as well as the E-8C Joint Surveillance Target Attack Radar System plane housed there and the Advanced Battle Management System that will replace it. McSally is a retired Air Force colonel who became the military’s first female combat pilot, and a staunch advocate for the A-10 attack plane and other USAF initiatives. She has also pressed military figures on sexual assault issues and revealed last year she was raped during her service.

Harrison believes the new makeup of the Senate could give the Air Force a better shot at retiring some of the planes they want to divest in favor of newer technology—like the A-10 McSally has defended.

The committee will soon roll out its upcoming hearings and priorities for the year. Many of the initial gatherings will focus on considering Biden administration nominees, followed by the annual budget and force planning hearings that happen every spring.

One of the first tasks for the new SASC will be to vet Lloyd J. Austin III, Biden’s pick to be the next Defense Secretary. Austin, a retired Army general who ran U.S. Central Command during the Obama administration, requires a congressional waiver to serve as the Pentagon’s top civilian because he retired from military service fewer than seven years ago.

SASC spokeswoman Marta Hernandez said Austin will answer written policy questions in advance before his confirmation hearing, as is standard for nominees.

“We will likely have an outside witness hearing on waivers, then the nomination hearing (just as we did four years ago for Mattis)—but we haven’t set the timing for that yet,” she said.

Harrison believes Biden will have an easier time getting his national security team confirmed by this Senate than if it were controlled by the GOP. But because the Senate is so narrowly divided, Democrats and Republicans will still need to work together more closely than they might otherwise with a wider margin.

That may become clearest during budget talks, when Republicans will need to get on board with any cuts Democrats might want to make. While progressives have pushed for far less than the $741 billion the defense enterprise received for 2021, other lawmakers were not on board for steep cuts.

“If the Democrats had won a big victory in the Senate, I think you would have seen the defense budget being cut maybe by 5 percent or something like that,” Lawrence Korb, a senior fellow at the Center for American Progress, told Air Force Magazine in November.