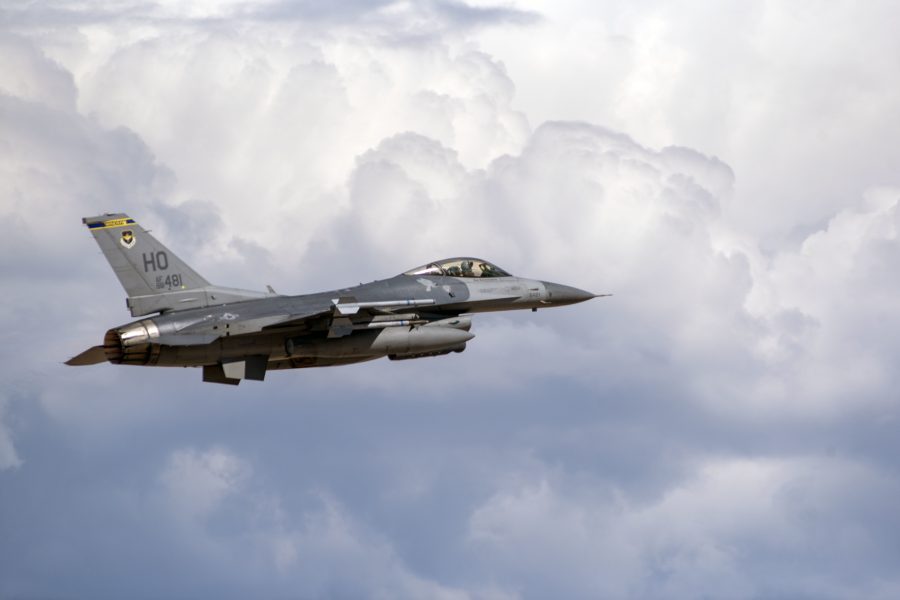 Pentagon researchers this week will pit man against machine in an aerial dogfighting tournament to see if artificial intelligence algorithms can outsmart each other and a human F-16 pilot in combat.

The Defense Advanced Research Projects Agency’s AlphaDogfight Trials will host eight teams that have developed advanced AI that can simulate up-close combat maneuvers in flight. The program bolsters the technology needed for DARPA’s Air Combat Evolution (ACE) program, which aims to automate air-to-air combat and build human trust in machines that can act on their own.

“Autonomy in air combat is certainly not new,” ACE Program Manager Col. Daniel Javorsek said in a recent interview. “The fact that it can be performed at human levels is something that’s a bit more new. … You have to have a system that works and is credible and can provide value in the environment that we want it in.”

On Aug. 18, each team will test its algorithms against five AI adversaries created by Johns Hopkins University’s Applied Physics Laboratory.

One adversary, dubbed “Zombie,” flies straight and level to imitate a cruise missile or an older type of drone that the military would want to target. Another situation would make an F-16 act more like a bomber jet by cutting off its afterburner or limiting how well it can turn. Other scenarios will feature adversaries that act like fighter jets.

On Aug. 19, all eight teams will take turns facing off against every other competitor in a round-robin tournament to establish a ranking. The next day, the top four teams will square off for the chance to fight the F-16 pilot in a simulator.

The ACE program is teaching those digital brains by starting with easier problems and ramping up in complexity and speed. Typical autonomy efforts skip the middle steps, leading to less capable final products, Javorsek said. AI needs to learn to work as a team with other aircraft, too.

“Even though [dogfights are] probably less likely in the future, the need for an ability to handle that sort of situation won’t go away,” he said. “We continue to use it as a gateway into these more demanding scenarios like suppression of enemy air defenses or offensive counter-air.”

DARPA’s initiative starts with modeling and simulation before moving to two subscale aircraft, one propeller-driven and the other a miniature jet. That approach will force the AI to learn how different plane designs can behave. At a later point, the program wants to add AI into a combat-representative aircraft.

The first phase of ACE ends near the end of 2021, followed by two 16-month phases to put the concepts into practice across gradually larger aircraft. If all goes as planned, DARPA could hand their work off to the Air Force in 2024.

Javorsek said he regularly talks to officials in programs like DARPA’s Gremlins drone swarming initiative, the Air Force’s Skyborg wingman drone project, and its Autonomy Capabilities Team 3. ACT3 is designing an autonomous aircraft that can take down a manned plane in air-to-air combat, with hopes of a demonstration in July 2021.

Those groups are working more on the hardware side, Javorsek said. When their aircraft are ready to accept AI algorithms, DARPA wants to offer the software it’s developed as one option. Program managers are trying to coordinate now so that their creations can work together in the end.

In practice, DARPA envisions that autonomy software could handle things like aircraft maneuvers and targeting, while the pilot acts as a cockpit quarterback.

“As we are kind of pushing the roles and responsibilities of pilots into this battle manager category, then what we’re essentially doing in this program is enabling the autonomy to be even more capable to handle that aircraft maneuver and these rapid, high-tempo decisions in a dynamic environment,” Javorsek said.

“We’d like to take it and see if there are ways to do some unmanned adversaries against our manned aircraft, and then let them learn and train their algorithms and see how good they get at fighting against us,” Holmes said. “I see the tests coming on as a part of that effort.”

Javorsek said DARPA is in the process of choosing the companies that will design more complex software for larger, more dynamic environments with more aircraft and conflict that extends past visual range. Those several companies should be on contract within the next two months.

Down the road, these efforts will move from simulators into live-fly testing with simulated weapons. Aircraft equipped with AI will have “safety pilots” onboard to ensure nothing goes wrong, though the software should be designed to avoid any accidents. Those tests will look at how often pilots rely on the AI system to handle tasks, and how well the humans handle their own battle management mission while AI does the rest.

“When I learned to fly, it’s kind of frightening how little support and augmentation was available to us from a cognitive support perspective, as well as flying the airplane itself,” Javorsek said. “There’s an awful lot more available to current pilots coming out of the pipeline.”