Raytheon delivered block 0 of the OCX ground-control system for the GPS III program “about a month ago,” Lt. Gen. John Thompson, commander of the Space and Missile Systems Center, told reporters Thursday at a Pentagon press briefing. The service has “accepted LCS block 0 delivery,” Thompson said, referring to the Launch and Check Out System necessary to launch the first satellite in the constellation in 2018. The announcement was a rare bit of good news for what Thompson called a “historically troubled program” that has seen numerous delays and cost overruns. OCX still “takes a considerable part of the Department’s time to oversee the contractor,” Thompson said, noting that under secretary of defense for acquisition, technology, and logistics Ellen Lord, under secretary of the Air Force Matthew Donovan, and Air Force Space Command boss Gen. Jay Raymond had each spent time recently in meetings with Raytheon “tracking the progress of this program.” —Wilson Brissett

The Air Force will hold a competitive source selection process for production of the remaining satellites in its GPS III constellation, Lt. Gen. John Thompson told reporters during a Pentagon briefing Thursday. An RFP for the production of satellites 11-32 is coming “before the end of the calendar year,” said Thompson, who is commander of the Space and Missile Systems Center. He expects “robust competition” among the three contractors—Lockheed Martin, Boeing, and Northrop Grumman—who will vie for a contract that is expected to have a value of about $10 billion. Lockheed is currently producing the first 10 GPS III satellites, and Thompson said that company has “a fair, competitive advantage” in the follow-on competition. But he also insisted that “we wouldn’t be doing a competition if we did didn’t think there was a viable alternative.” Col. Steve Whitney, director of the GPS directorate at SMC, told reporters the program office had seen “a viable model of a working payload” from each of the three contractors. The first GPS III satellite is expected to launch in 2018. —Wilson Brissett

The government of Niger is “open” to allowing armed US remotely piloted aircraft to conduct strikes within that country following last month’s deadly ambush of US soldiers. The Air Force has MQ-9 Reapers stationed inside Niger already, but they are not allowed to conduct kinetic airstrikes. Nigerien Prime Minister Brigi Rafini told the Wall Street Journal on Wednesday that the US is in Niger at his country’s request, and “drones are among the tools they have to use.” The aircraft is flown for reconnaissance, and Niger is open to using them for combat “if we need them for other uses,” he told the paper. The US military on Oct. 4 sought permission to send an armed drone to the patrol of Green Berets that were ambushed, but that request was blocked, according to the Journal. The Air Force’s 323rd Expeditionary Reconnaissance Squadron flies MQ-9s out of Nigerien Air Base 101, according to US Air Forces in Europe-Air Forces Africa. –Brian Everstine

Senate Armed Services Committee Chairman Sen. John McCain (R-Ariz.) said Wednesday he “couldn’t support further nominees” with a defense industry background. Speaking during a nomination hearing for four nominees, including a former Raytheon executive tapped to be the next Army secretary, McCain said he had reservations about nominees coming from the Trump administration, but then said he would move the four selections through “as quickly as possible.” Read the full story by Brian Everstine.

Adapted rules of engagement for the space domain would be necessary in order to take full advantage of the capabilities of current military satellites, Lt. Gen. John Thompson, commander of the Space and Missile Systems Center, told reporters Thursday at a Pentagon press briefing. The National Security Council is considering such a change, National Security Advisor H.R. McMaster said in October. Thompson said that today’s satellites in the SBIRS, AEHF, and other constellations are operating in a “baseline configuration.” Within the current ROE, “almost all of those systems…have planned upgrades” to a “second baseline” with greater capability, Thompson said. “If our senior leaders in government make changes to rules of engagement, then I actually see in our future a third baseline,” he said, not permissible under the current ROE. When pressed for specific inadequacies in the current ROE, Thompson said, “we’ve got to get away from systems made to operate in a benign environment and get more towards systems able to be resilient in a contested environment.” —Wilson Brissett

The State Department on Wednesday announced it approved a possible sale of $1.1 billion in F-15Q support to Qatar. The sale, if approved by Congress, would include construction of taxiways, hangars, alert facilities, operations facilities, force protection support facilities, and other program support, according to a Defense Security Cooperation Agency release. The contract supports US foreign policy because “Qatar is an important force for political stability and economic progress in the Persian Gulf region.” In November, the State Department approved the sale of 72 F-15Qs to Qatar for $21.1 billion. —Brian Everstine 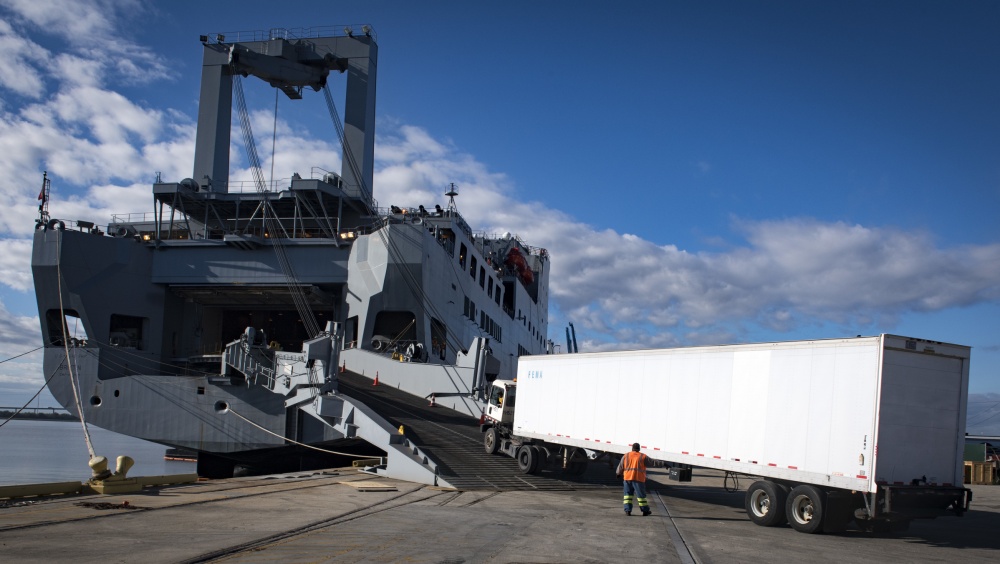 Cargo is driven onto the USNS Brittin (T-AKR-305) by a flatbed truck on the Joint Base Charleston Naval Weapons Station Oct. 28, 2017. DOD Photo by SSgt. William O’Brien.

JB Charleston, S.C., recently finalized a new agreement with the Federal Emergency Management Agency to increase the amount of aid that can flow to Puerto Rico by combining C-17 airlift with Navy sealift. The 841st Transportation Battalion at Charleston worked with FEMA to load the USNS Brittin, with its first cargo shipment leaving Oct. 31. The ship will travel between the base and Puerto Rico several times over the next few months, with the first shipment carrying food, water, and vehicles, according to a Charleston release. Charleston C-17s have so far lifted more than 1,700 tons of aid, supplies, and medical teams to areas affected by Hurricane Maria in Puerto Rico and the US Virgin Islands, as well as areas impacted by hurricanes Harvey and Irma. “To all my fellow Americans in Puerto Rico, help is on the way,” said Lt. Col. Chad Blacketer, commander of the 841st Transportation Battalion, in the release. —Brian Everstine

A failure to apply a layer of primer on aluminum fasteners to prevent corrosion resulted recently in a 30-day halt of F-35 deliveries, Bloomberg reported Wednesday. “After a thorough government and industry investigation, it was discovered that Lockheed Martin had not applied the required primer in fastener holes on F-35 substructures during the aircraft production process,” program spokesperson Joe DellaVedova told Bloomberg. “This is a production quality escape issue and, though it needs be corrected to prevent potential future corrosion, it does not pose a safety of flight risk to the F-35 fleet or affect current operations.” The Department of Defense resumed deliveries on Oct. 20. In July, Lockheed received an initial contract for Lot 11 of low-rate initial production. Following Lot 11, the next contract is expected to ramp up aircraft production for an expected “block buy” of the jets.