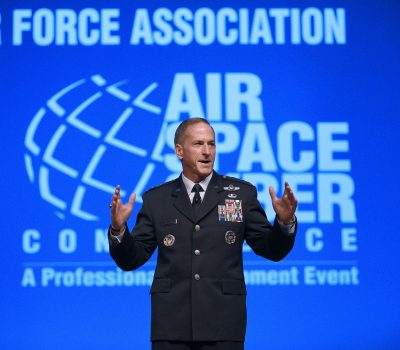 By Jennifer-Leigh Oprihory
The Air Force Association's 2020 Air, Space & Cyber Conference will be held virtually in September because of the COVID-19 pandemic, the association announced July 6. The digital event will take place the week of Sept. 14, as scheduled, and feature a mix of live and on-demand conference sessions, opportunities to interact with leaders, industry exhibits, and sessions with top Air Force and Space Force leaders. AFA's president, retired USAF Lt. Gen. Bruce “Orville” Wright, said the decision to hold the event online was “extremely arduous” but necessary given that “a safe, high-caliber, in-person” conference for 12,000 attendees would not be possible under current conditions. 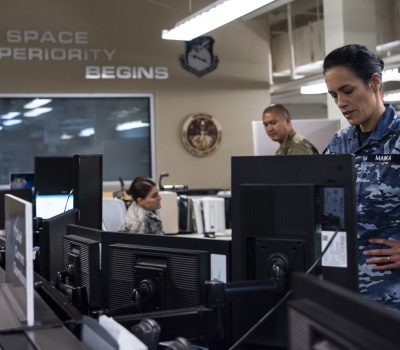 About Half of US States Bid to Host SPACECOM

By Rachel S. Cohen
More than two dozen states are vying to become the future home of U.S. Space Command, a far broader field than was previously considered. “The Department of the Air Force has received nominations from 26 states,” Air Force spokeswoman Ann Stefanek said. “We were pleased with the strong response the Air Force received from across the country with state nominations.” Stefanek did not say which cities or states are in the running, but communities from Washington state to Florida have announced their candidacy. 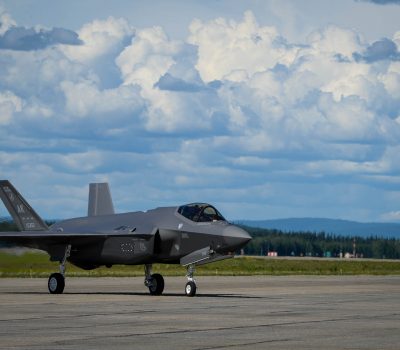 By John A. Tirpak
The Air Force's F-35A fleet has become its third-largest fighter fleet—larger than that of the F-15C/D or E variants and larger than the F-22 Raptor fleet—and the type will likely surpass 250 air frames by the end of August, according to the Joint Program Office. The U.S. Air Force's F-35s comprise nearly half of all those delivered globally. 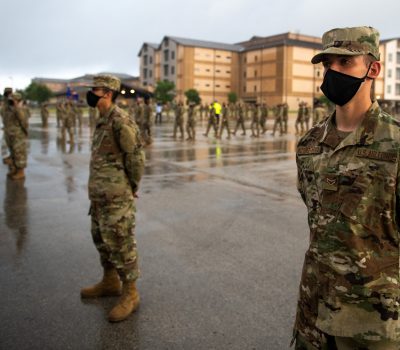 By Alyk Russell Kenlan
Ten Airmen recently became the first to graduate Basic Military Training after English learning through an Air Force program. The Airmen were in the Defense Language Institute English Language Center’s ECHO Flight program beta test, a replica of an Army program that provides language training to those who don’t have strong English abilities and want to join the military. The trainees in the beta test were nine Spanish speakers from Puerto Rico and one Korean speaker from South Korea.“The Air Force is looking at, How can we be more diverse and inclusive?' ” said Col. Kouji Gillis, commander of the DLIELC and the 637th Training Group. “[The trainees] are our future international leaders. The international community is counting on [them] in the future.” 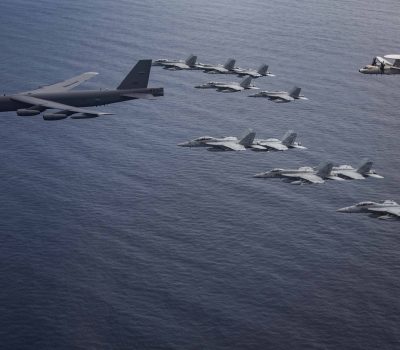 B-52 Flies with Carrier Strike Groups in South China Sea

By Brian W. Everstine
A B-52 from Barksdale Air Force Base, La., flew a 28-hour mission to the Pacific on July 2, linking up with two Navy carrier strike groups in the South China Sea in a show of strength in international waters. The B-52 from the 96th Bomb Squadron linked up with the U.S.S. Nimitz and U.S.S. Ronald Reagan, flying alongside F/A-18 Super Hornets and an E-2 Hawkeye early aerial threat warning aircraft. The maritime integration exercise aimed to show the military’s “commitment to the security and stability of the region,” according to a Pacific Air Forces release. That practice aims to deter Chinese aggression in the area. The flight “demonstrates U.S. capability to rapidly deploy to a forward operating base and execute long-range strike missions,” 96th Bomb Squadron Commander Lt. Col. Christopher Duff said in the release. 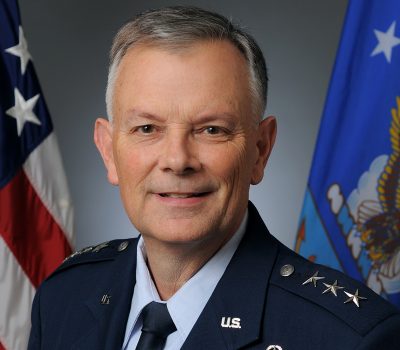 By Brian W. Everstine
Lt. Gen. Glen D. VanHerck, currently the director of the Joint Staff, was nominated July 1 to take over as the next commander of U.S. Northern Command and North American Aerospace Defense Command. If confirmed, VanHerck will receive his fourth star and take over for Gen. Terrence J. O’Shaughnessy, who has led NORTHCOM since May 2018. The Pentagon has not announced O’Shaughnessy’s next move. Before the Joint Staff, VanHerck served as the commander of the U.S. Air Force Warfare Center and operations director at Air Force Global Strike Command.

Sullivan recently took command of the 20th Fighter Wing at Shaw Air Force Base and has used his first month or so in Sumter to get to know the squadrons, teams and airmen who comprise the Air Force's largest F-16 combat wing. His first focus has been to ensure the health of the Airmen.

Last year was another good year for the space industry overall, with record launch numbers and a spurt in both broadband and remote sensing technology innovation, according to the Satellite Industry Association’s annual report. While the COVID-19 pandemic has had some negative impact, especially on the satellite manufacturing sector, the industry has seen growing demand during the crisis for connectivity because of the huge increase in telecommuting by both the commercial and government workforces.

L3Harris Technologies has launched the first satellite of a remote sensing constellation it is developing for the U.S. Air Force. In a July 6 news release, L3Harris said the constellation of small satellites will provide imagery to military operators on the ground. “The company will task, command and control the satellite system, as well as perform on-board processing of data to deliver imagery products directly to warfighters.”

On a recent roundtable episode of the podcast, Douglas A. Birkey, executive director of AFA’s Mitchell Institute for Aerospace Studies, discussed service and congressional trade-off required to sundown legacy platforms while introducing and expanding new systems and technology.

1st. Lt. Kenneth “Kage” Allen was laid to rest on July 4 following a public ceremony attended by hundreds at Box Elder High School. Friends and Family got up to speak and share their stories of Kage Allen, a Utah native and Air Force pilot who died when his jet crashed into the North Sea, to the crowd.

The project will be the most extensive rebuilding of the Offutt runway since it was first constructed in 1941 and extended to its current length in the mid-1950s.

“‘God Bless The U.S.A.’ is one of America's most iconic songs, so we are thrilled to have been part of history in the brand new cover of this hit, featuring Lee Greenwood, Home Free, and our very own Singing Sergeants!” the U.S. Air Force Band wrote on YouTube.