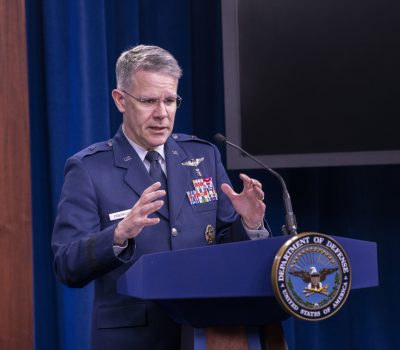 By Rachel S. Cohen
The Pentagon reported having 49 military personnel who have tested positive for the new coronavirus, as well as 19 dependents, 14 civilian employees, and seven contractors, as of 5 a.m. March 18. The total has risen from 37 confirmed cases as of March 16. Brig. Gen. Paul Friedrichs, the Joint Staff surgeon, said 936 patients have been tested for the virus by Defense Department labs as of March 17. Those who have contracted the coronavirus are not showing more severe symptoms than expected. As DOD begins using its resources to help the country address the global coronavirus pandemic, the department is in contact with governors nationwide about which states need more swabs, masks, ventilators, hospital beds, and assistance from two hospital ships. 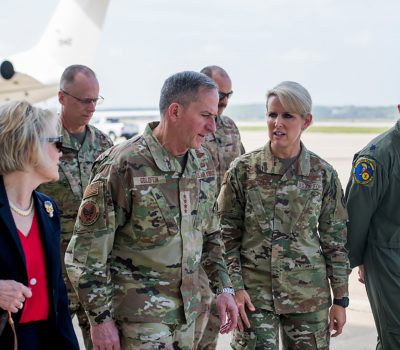 By Brian W. Everstine
The Air Force’s rapid global mobility mission has ramped up to address the outbreak of the new coronavirus, with USAF aircraft ferrying test kits in support of the Department of Health and Human Services while the U.S. tries to stem the COVID-19 threat. Chief of Staff Gen David Goldfein confirmed there was a “pretty significant movement” into Memphis on March 17, which is a hub for commercial cargo flights to disperse the tests. USAF mobility aircraft also are flying spare parts into bases like Aviano Air Base, Italy, so they can keep flying even though the surrounding region is in lockdown. 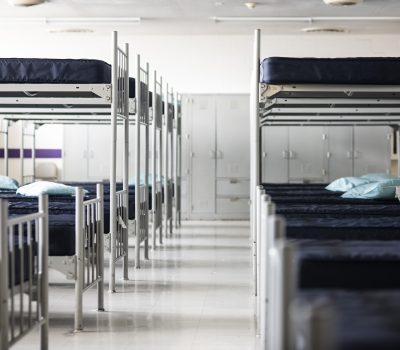 By Jennifer-Leigh Oprihory
Air Force Basic Military Training might not be on hold due to the COVID-19 pandemic, but it’s getting some major, immediate changes to halt the coronavirus’ spread. Starting March 18, incoming recruits will now undergo a two-week-long restriction of movement (or ROM) at the start of their training, according to an Air Education and Training Command release issued the same evening. Social distancing will also be factored into incoming trainees’ living arrangements, the command said. 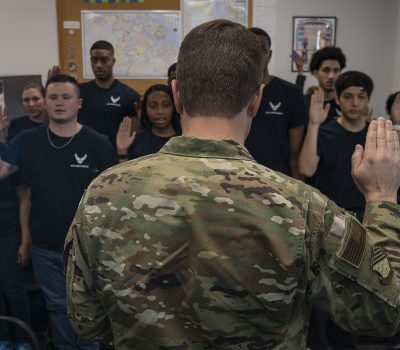 USAF Recruiting Not Impacted by Pandemic—Yet

By Amy Hudson
The evolving COVID-19 crisis has not yet impacted Air Force recruiting, but it’s only a matter of time before the pandemic takes its toll. “So far nobody has reported any issues with recruiting, but common sense would say that as the nation limits its movement, at some point, that is going to have an impact,” Chief of Staff Gen. David Goldfein told reporters on March 18. 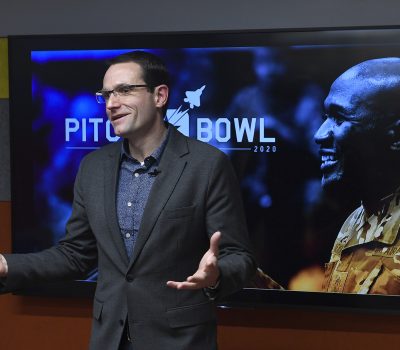 By Jennifer-Leigh Oprihory
Assistant Secretary of the Air Force for Acquisition Will Roper recently announced the creation of AFVentures, which will serve as an “umbrella organization for the Air Force’s efforts to work with small businesses to fund critical technologies for the warfighter,” according to a release. During this year’s event, Roper also said the service intends to divvy up almost $1 billion in contracts among "more than 550 small businesses," including 21 "big bet" organizations who will receive four-year, fixed priced follow-on contracts from AFVentures. These companies are working on a variety of new technology, from an Advanced Battle Management System sensing network to a new Vertical Take Off and Landing unmanned aerial system, and Augmented Reality contact lenses. 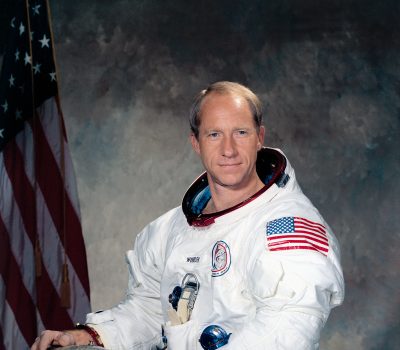 By John A. Tirpak
Astronaut Al Worden died March 18 at the age of 88. A former USAF fighter pilot, he was the Command Module Pilot for the all-Air Force Apollo 15 mission, during which he made the first "deep space" spacewalk. 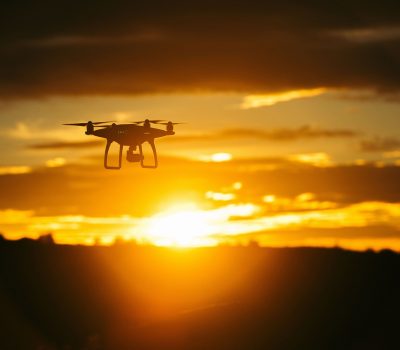 By Brian W. Everstine
Two New Jersey men have been arrested for using drones to smuggle contraband into a federal prison adjacent to Joint Base McGuire-Dix-Lakehurst, N.J., after a combined Air Force Office of Special Investigations and U.S. Department of Justice investigation. On March 12, OSI agents from Field Investigations Region 3, Detachment 307 at the base caught the two men—Nicolo Denichilo, 38, of Jersey City, N.J., and Adrian Goolcharran, 35, of Union City, N.J.,—at a “launch site” near Fort Dix after officials saw a drone flying over a housing unit at the prison. OSI said they were “especially interested” in the case because the flight path of the drones directly conflicted with the flight path of USAF aircraft at McGuire-Dix-Lakehurst.

Disinfecting Drones to Fight COVID-19? No Thanks, Says Defense Department

As cases of the novel coronavirus continue to rise in the U.S., Defense Department officials said they have no plans to turn drones into disinfecting machines, despite propositions from companies presenting the method as simple and effective.

The Defense Department’s $740.5 billion discretionary defense budget request for fiscal 2021 is unlikely to be affected by the outbreak of COVID-19, but responses to the virus and its economic effects are likely to increase U.S. public debt and potentially hit budgets in the longer term.

The nation’s largest integrated health care system has only limited protocols in place to protect elderly patients. Roughly half of the 9 million veterans who use the VA’s hospitals are at least 65 years old.

As military families grapple with thousands of different difficult situations that the coronavirus has brought to their lives, the military relief societies want people to know they can help with financial assistance in a variety of ways.

Office of Personnel Management Director Dale Cabaniss resigned unexpectedly on March 17 as federal agencies struggle to cope with the spread of the novel coronavirus that has brought life to a halt for millions of Americans.

At least three rockets struck Baghdad’s fortified Green Zone near the American Embassy late March 17, a day after an attack on a training base south of Baghdad where U.S.-led coalition troops and NATO trainers were present, Iraqi security officials said. It was the fourth such attack in the span of a week.

“Given the critical nature of National Security Space Launch, winners of the competition to replace the Atlas V and its Russian-made RD-180s engines should have the flexibility to adapt to unforeseen events, the self-knowledge and willingness to work closely with the Air Force, and a record of excellent performance to avoid wasteful contract award protests,” writes retired USAF Col. Mark Gunzinger, director for future concepts and technology assessments at AFA’s Mitchell Institute for Aerospace Studies. More importantly, not adhering to these criteria could increase NSS mission risk and threaten America’s future standing as an unmatched leader in space.

Originally scheduled for May 8, to coincide with the 75th anniversary for the end of WWII in Europe, the Arsenal of Democracy Flyover was to have seen upwards of 60 WWII-vintage aircraft flying in formation over Washington, D.C.. The Commemorative Air Force, which is running the event, has talked with the various aircraft owners and sponsors involved and moved the event to September.

No U.S military branch is complete without a line of collectible, gun-toting action figures, and with your help, the burgeoning U.S. Space Force could finally get its plastic treatment—with a few major Sci-Fi twists. That's right, a new Kickstarter is raising money to produce a line of four-inch tall, spacesuit-clad figures who come from an alternate universe where Presidents Donald Trump and Barack Obama team up to beat Russian president Vladimir Putin in a rocket-fueled race to Mars.