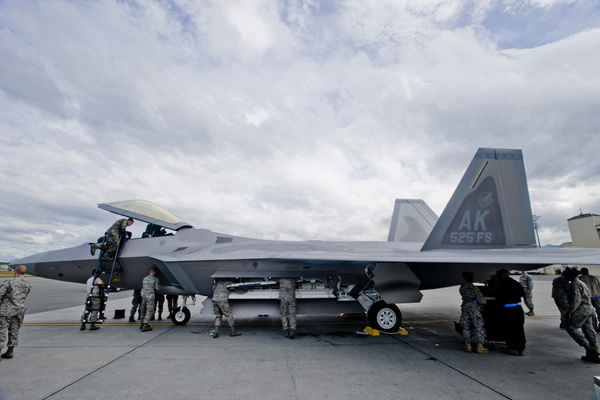 a bipartisan appeal, senior members of the House Armed Services Committee have called on Defense Secretary Robert Gates to release funds authorized by Congress in Fiscal 2009 to keep the F-22 production line flowing uninterrupted until the new Administration—which we now know will be led by President-elect Barack Obama—decides on the fate of the fighter program. In an Oct. 31 missive, Rep. Ike Skelton (D-Mo.), HASC chairman, Rep. Duncan Hunter (R-Calif.), ranking member, Rep. Neil Abercrombie (D-Hawaii) chair of the HASC air/land forces subcommittee, and Rep. Jim Saxton (R-N.J.), the subcommittee’s ranking member, urge Gates to obligate the $140 million in funds that Congress allotted to sustain F-22 production until March 2009, thereby giving the Obama White House time to decide. “A decision not to bridge the current contract by not obligating this $140 million would effectively preclude the procurement option by dramatically increasing the cost of procurement because of line closure actions taken that would have to be reversed,” they write. According to the letter, Pentagon weapons czar John Young turned down an earlier Air Force request to release the funds, which the Congressmen said did not appear consistent with the Office of the Secretary of Defense’s position to keep the Raptor production option open to the new Administration. The Congressmen said the bridge funds “are immediately required to complete the necessary actions for a contract award by Nov. 27, 2008.” Otherwise, the F-22 program would incur substantial production restart costs if the Obama White House decides to keep the line going. Asked late yesterday if the $140 million had been released, a Pentagon spokesperson told the Daily Report that “the DOD is committed to bridging F-22 production to preserve options for the next administration.” (For more, read yesterday’s Wall Street Journal report and an earlier The Hill report).

A $3.2 million bond issue in Cascade County, Mont., conceived to help preserve the option of regaining a flying mission for Malmstrom Air Force Base, went down to defeat Tuesday by about a 2:1 margin, according to local Montana news...

Twenty-five Air Force civilians began the first civilian acculturation and leadership training program Oct. 27 at Air University’s Officer Training School on the grounds of Maxwell AFB, Ala. The two-week course is adapted from OTS instruction. “The program stems from...

The first group of Air Force recruits to undergo the service’s expanded basic military training course arrived at Lackland AFB, Tex., Nov. 3. In 2006, the Air Force decided to expand BMT from 6.5 weeks to 8.5 weeks, with the...

The Air Force has awarded Northrop Grumman a $5.8 million contract to study the feasibility of installing the multi-platform radar technology insertion radar on the E-8C ground-surveillance platform, the Department of Defense announced Nov. 4. MP-RTIP, being developed by Northrop...

Getting Exposure to New Mobile CP

Getting Exposure to New Mobile Command Post: Airmen are now training with the service’s newest, deployable mobile command post at the US Air Force Expeditionary Center on the grounds of Ft. Dix, N.J. Called the hard-sided expandable lightweight air mobile...

On Course for GPS Upgrade

The Air Force expects to start broadcasting a new improved GPS civil navigation message about one year from now. According to a release Nov. 3, the service said it will upload new software to the GPS Block IIR-M satellites next...