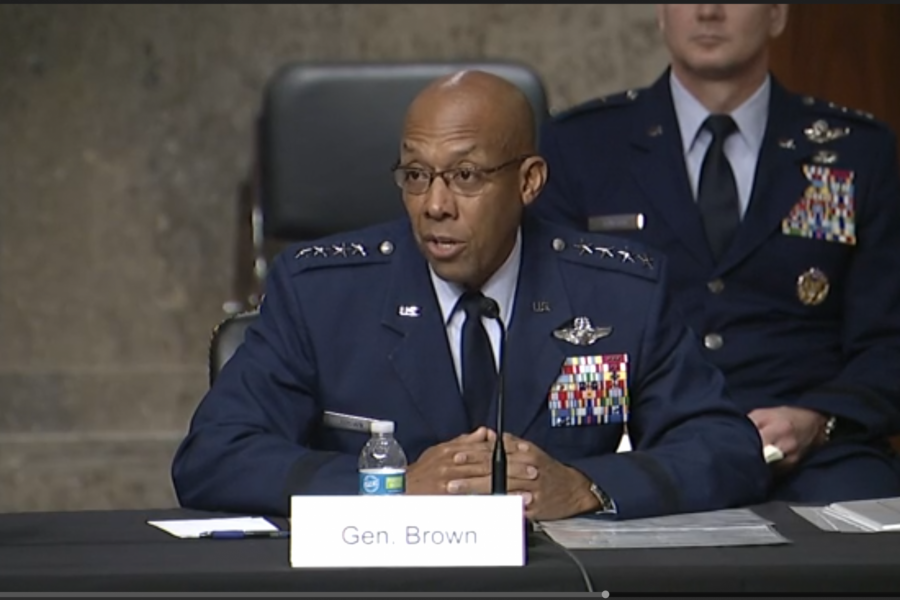 Pacific Air Forces boss Gen. Charles Q. Brown Jr. is arguing for a wholesale refresh of the Air Force’s roles and missions as he prepares to take the service’s top job.

Brown, a decorated combat pilot, testified May 7 before the Senate Armed Services Committee during his confirmation hearing. If confirmed, he would become the Air Force’s 22nd Chief of Staff, but the first African American to hold the position. He would succeed Gen. David Goldfein in overseeing a $168 billion budget and about 685,000 employees.

In answers to advance policy questions provided to the committee, Brown made the case for a sweeping review of what work the service should manage. There’s no better time to consider those changes than during the first few years of a new National Defense Strategy and the infancy of the Space Force, and in the midst of the coronavirus pandemic, he said.

“Now is the time to reconsider our approaches to air power, and if confirmed, I am ready to participate in a meaningful discourse to rethink prior assumptions and take steps towards consolidating and reducing redundancies,” Brown told lawmakers.

During the hearing, he indicated that as the military proceeds with new battle management ideas, it will open up those discussions as well. If Brown understands what mission sets are the most important to the other services, he said, that will shape how the armed forces support each other going forward.

“That is part of the work we have to do with the rest of the joint team, is understand their scheme of maneuver, how we work our joint warfighting concept, and how we work together,” Brown said of USAF support to ground forces. “One of the key aspects that we are able to do as an Air Force is provide some of the command-and-control aspects. … The key part for me is to understand for our sister services, what is their highest priority, so we can work together on [the Advanced Battle Management System] versus us going our own way.”

Last year, Brown suggested mounting a new roles and missions study to look at whether the Air Force can take on air base defense, an area where the Army is also heavily pursuing counter-drone weapons. Handing it to the Air Force could “better defend the fenceline against all threats from small [unmanned aerial systems], all the way through hypersonics,” Brown said.

He believes the Pentagon’s past attempts to sort out roles and missions have not resolved much. Each service still argues it needs tailor-made platforms for its own use, like the F-35 Joint Strike Fighter or certain space systems, even if another armed force already owns something similar.

“It has been said that the United States has [at least] four air forces, and while that’s ironic, it also shows the value of the air to modern combat operations,” Brown wrote. “Some redundancies make sense given the strategic environment, but I agree that there are redundancies that detract from both efficiency and effectiveness of the joint force.”

He pointed to areas like intelligence, surveillance, and reconnaissance where DOD assets can be complementary instead. For example, the Air Force does not need to own as large of an RQ-4 fleet when the Navy, NATO, and other foreign countries have bought similar platforms, he suggested.

The line between air and space capabilities is also blurring as technologies like hypersonic and directed-energy weapons evolve, Brown added.

Brown’s writings are more vocal about the need to reevaluate roles and missions than Goldfein was during his own confirmation process, a sign that circumstances have changed in the past four years.

Goldfein recently said long-range strike may be another area where budget constraints could force the Defense Department to limit investments from services other than the Air Force.

“As budgets get tighter, … we are going to have to take a hard look at where we have duplication, and where we have an ability for better collaboration,” Goldfein said at a Mitchell Institute for Aerospace Studies event. He is leaving the Air Force after four years as Chief of Staff.

As the new Chief, Brown would manage an ambitious slate of modernization programs from new fighters and bombers to nuclear weapons and the Advanced Battle Management System. He would be the newest Chief of Staff to address a military pilot shortage, troubled family housing, and readiness issues exacerbated by the coronavirus pandemic.

He told Sen. Deb Fischer (R-Neb.) during the hearing the Air Force is large enough to be effective in the short term but the goal is still to grow to 386 squadrons.

“Anything less than 386 incurs risk. And so our ability to actually get capability in the hands of the warfighter faster and be able to move faster so we can compete against our adversaries are important aspects to help us with the National Defense Strategy,” he said. “We may be a little bit smaller than 386 [squadrons], but we’ll be more capable. Effectively, you’re getting closer to 386. With that, it’s not just the manned platforms. It’s also how we move to manned-unmanned teaming.”

The pandemic has changed his outlook on what poses the largest hurdles to achieving those goals.

“I see an emerging challenge where our strategic aspirations and our resources available may be on divergent paths driving future tough choices,” Brown wrote. “As we review strategic objectives and priorities in the post-COVID-19 period, and continue the journey we started to build the Air Force we need to align with the NDS, we have many constraints and restraints that could hamper our ability to achieve our objectives as originally envisioned. The worst outcome would be to … cut DOD funding without adjusting the strategy or priorities. In my mind, this would amount to sequestration by another name.”

Brown told Sen. Mike Rounds (R-S.D.) he’s open to taking a new look at the Air Force’s pass-through funds as well, which is money that goes to other services but makes the Air Force’s total budget look larger than it is. Lawmakers may take up the pass-through issue in the fiscal 2021 defense policy bill, which could spur a major shift in how national security space programs are funded, Air Force Magazine previously reported.

Brown agrees with other Pentagon officials who assessed the Air Force needs 3 to 5 percent real growth over the next five years to be able to counter another advanced military like Russia or China while also managing counterterrorism in the Middle East and Africa.