Skip to content
Air ForceChief of Staff Gen. Charles Q. Brown Jr. speaks to a virtual audience on how the Air Force is adapting to what he called the "changing character of war" during a July 1 Atlantic Council event. Screenshot photo.
Expand Photo 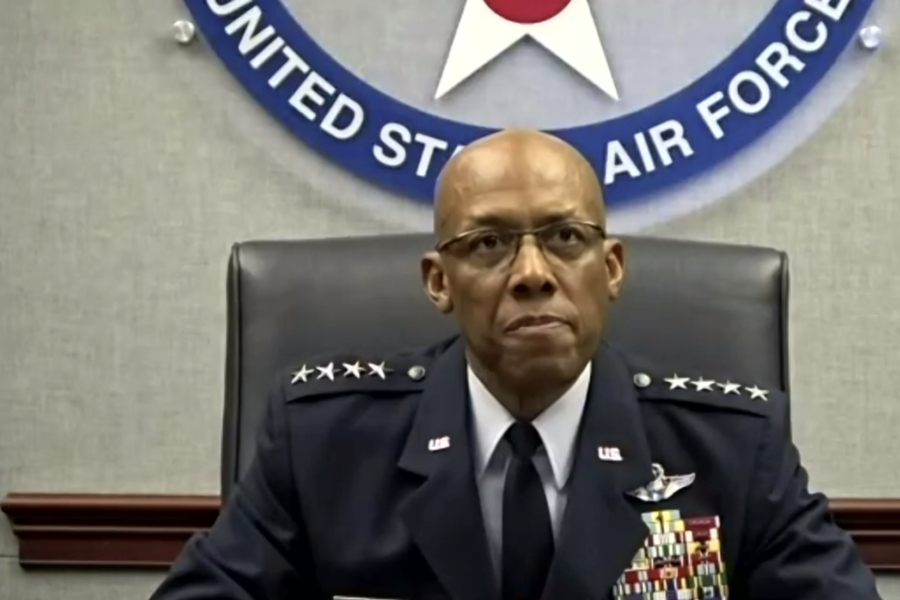 Air Force Chief of Staff Gen. Charles Q. Brown Jr. is fashioning a fighting force to match what he describes as the “changing character of war,” one where all domains are contested and capabilities matter more than numbers, he told the Atlantic Council on July 1.

As the United States moves away from the Middle East theater and focuses on meeting the challenges of great power competition with China and Russia, Brown questioned the mainstream thinking that America needs to win with quantity of fighter aircraft. Rather, he focused on the mix of capabilities required to overcome a technologically advanced adversary. He also called for a willingness to experiment in the digital realm while staying vigilant to counter rising cyber threats.

“Our future conflicts will be different,” he said, underscoring how Mideast conflicts are winding down.

“Our future adversaries will not allow us permissive access like we’ve been accustomed to in the past, and [we] will be contested at every level, in every domain, and I would submit that we are contested today,” he added.

The Air Force asked to retire a total of 201 legacy aircraft in its 2022 budget request and it will buy 91 new ones, as it looks to posture itself to keep pace with peer adversaries. Planning for the fiscal 2023 budget is underway amid a fiscally constrained environment, and Brown said the service is contemplating what the future force needs to look like.

“It’s easy for us to talk about numbers, and we’re also talking about capability,” he said, giving an example of a comparison between the F-86 and the F-35. “What I really look at is the capabilities required … [as] we look at where the Air Force needs to be about the 2035 timeframe.”

Brown posed that the United States Air Force now possesses “some” of that capability, what he described as a mix of air superiority, global strike, command and control, and intelligence, surveillance, and reconnaissance.

“I want to make sure we have the right mix of capabilities with the right numbers to make it come together,” he said.

Brown admitted that in the last couple of decades, adversaries have looked for America’s military weaknesses and increasingly targeted the cyber domain.

“The internet security environment has changed,” he said. “Our competitors have worked to blunt our capabilities and erode what I would call our comparative advantages that we had as an Air Force, as a joint force.”

The impact of cyber interference by adversaries is one that plays out on a daily basis in the lives of Americans, Brown said, offering by way of explanation all the information that can be manipulated on an iPhone.

The fast and secure movement of information must be able to flow from senior leaders to lower-level commanders, but it also means working when that information flow is disconnected or incomplete.

“It’s better to be better prepared with information up front, so if you’re disconnected, you have an aspect of kind of what’s going on,” he said. “You want to be able to have the right information, bring those data sources together, and then be able to use various tools to parse through the information you need to know.”

He used an analogy of an Apple Store as headquarters and the end-point devices, such as phones, tablets, and applications to explain the Air Force needs.

“We need an ecosystem that can both be centralized, but [also] rapidly distributed and decentralized, and can work decentralized,” he said. “Whether when we’re connected to the backbone at a high, high, rate of speed; and be highly insightful using AI [artificial intelligence] and ML [machine learning], and be able to do the same when it’s disconnected.”

Then there is the need to “quickly transition between connected and disconnected states; that’s kind of the federated and distributed command and control architecture we need” to be competitive against Russia and China.

“I personally have been thinking about … the norms of behavior in cyber,” he said. “You look at some of these most recent events that have transpired, because that could lead to a miscalculation.”

Brown said the Air Force needs to continue down the path of digital engineering while remaining cognizant of the risks of operating in the cyber and digital environment.

He offered the example of joint all-domain command and control.

“There is value in this rapid experimentation approach because it’s a way for us to disrupt how we do business,” he said.

Brown said new risks must be taken to realize the Air Force of the future.

“We can’t do the same thing and expect a different result if we’re going to change ourselves for the future,” he said.