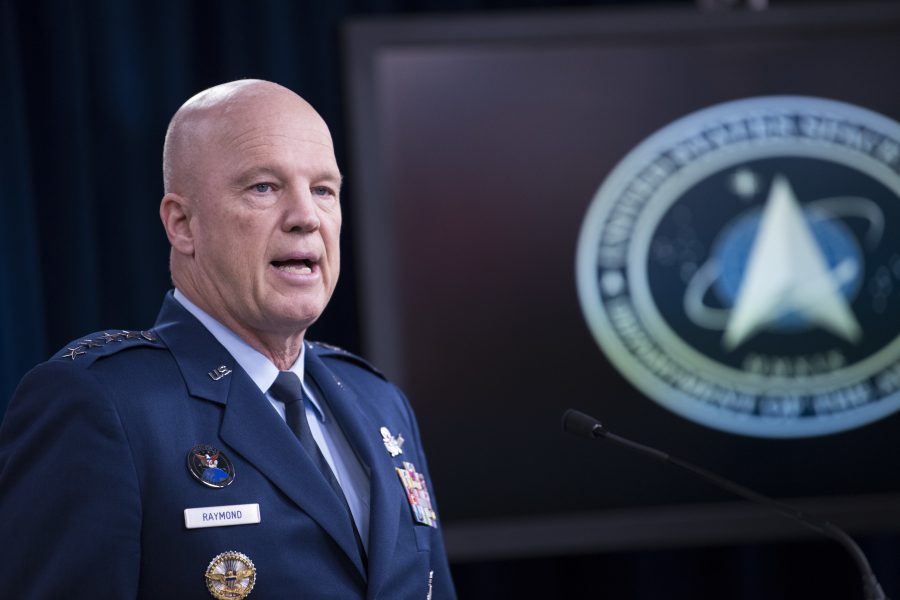 Work is still underway to build up the Space Force even as the new coronavirus raises some unexpected hurdles, the service’s top uniformed officer said March 27.

Social distancing guidelines meant to slow the pandemic’s spread are complicating Chief Master Sgt. Roger Towberman’s swearing-in to become the Space Force’s first senior enlisted advisor—it’s harder to gather scores of people when they come from different states and all must stand at least six feet apart. Precautions are also delaying the ceremonies to rename space-focused bases like Patrick Air Force Base, Fla., to Patrick Space Force Base.

“In these types of events where there’s a ceremony required, we want to make sure that we can do it in a way that’s safe and effective,” Raymond said.

Raymond outlined the progress the Space Force has made as it approaches its first 100 days. The service is preparing to welcome about 60 U.S. Air Force Academy cadets, who will directly commission into the new service upon graduation in May. It’s also designed its inaugural flag, and will present it to the public when ready.

Public announcements on what to call space professionals, what their uniforms will look like, and more are coming soon, Raymond said. He indicated the coronavirus has not halted the Department of the Air Force’s planning to formally transfer about 16,000 personnel into the Space Force starting later this year.

The service has sent reports to Congress on a final organizational plan and a review of the Total Force assets it needs, including civilian management. Another report describing the new space acquisition structure is due to lawmakers within the next week. DOD is mulling the possibility of a Space National Guard, and a blueprint for a Pentagon-wide missile warning and defense architecture is underway as well.

The pandemic has not affected the Air Force’s search for a SPACECOM headquarters location so far.

“In March, we took initial operational capability of Counter-Communications System Block 10.2; the Space Surveillance Telescope in Australia saw first light, was used for the first time; the Space Fence, we will declare today, reached initial operation[al] capability; and the second GPS III satellite today will be operationally accepted,” Raymond said.

Raymond said he is very comfortable with the measures the military is taking to protect space operators from illness. He reviewed all of the missions under his purview, such as missile defense, satellite communications, and GPS operations, to ensure each has the right people and resources right now.

Safe, effective space operations continue, without any reduction in, or prioritization of what space troops can provide to commanders around the world, he said. New requests are coming in for pandemic-related support, too.

“Forces assigned to U.S. Space Command optimized our wideband satellite constellation to provide essential, additional bandwidth in response to a request from the USNS Mercy as it heads to Los Angeles to provide much-needed assistance to regional hospitals treating coronavirus patients,” Raymond said.

He added that the Space Force and SPACECOM have canceled a major Space Flag exercise in late April to instead try virtual collaboration and local training.

Only mission-essential personnel can enter space operations floors, and crews aren’t allowed to mingle with other groups. Service members are not being proactively tested for the virus but are told to telework if possible, clean their workspaces and remain apart if they must come in, and routinely take their temperature. If someone tests positive, they are separated from their coworkers and replaced by backup personnel.

“The classified nature of our work does make [telework] a little challenging,” Raymond said. “We’ve got a significant portion of our folks teleworking. For those that can’t do their job from a telework environment, they come into work. We socially distance and we make sure that we take every measure we can to keep them safe.”