Skip to content
Four Collaborative Small Diameter Bombs, or CSDBs, hang from the wing of an F-16 Fighting Falcon from the Air Force Test Center’s 96th Test Wing at Eglin Air Force Base, Fla., on Nov. 14, 2020. Two of the bombs were dropped during the first flight demonstration of the Air Force Golden Horde Vanguard program. USAF courtesy photo.
Expand Photo 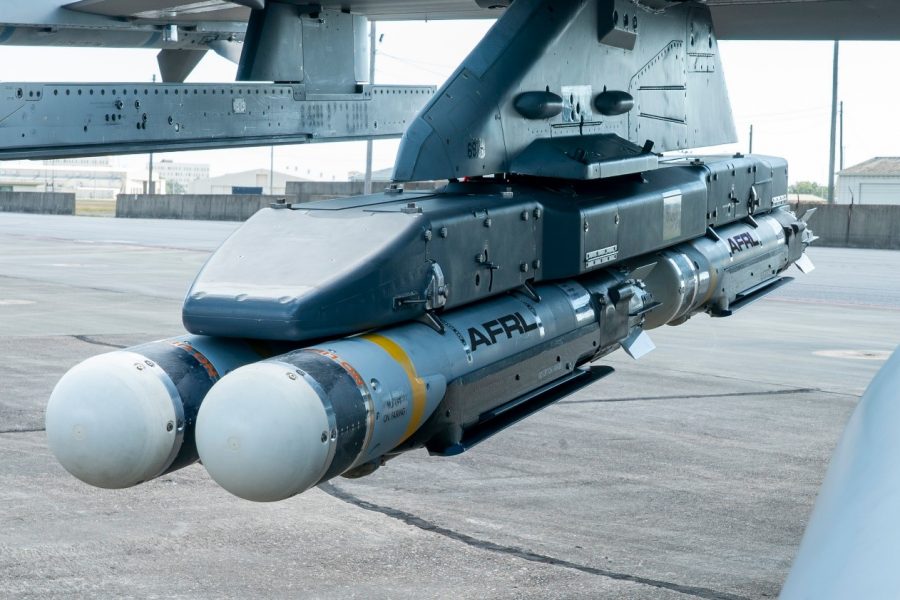 A group of networked bombs failed to hit the right target in the Air Force’s first flight test of its nascent weapon-swarming technology last month, posing a new obstacle as the service tries to speed the concept to the battlefield.

On Dec. 15, the Air Force Test Center dropped two Collaborative Small Diameter Bombs from an F-16 jet to see whether the modified weapons could work together. The bombs use autonomous tools to “talk” to each other in flight and carry out missions as a team.

Because of an “improper weapon software load,” however, the commands that would have told the bombs to move in tandem were not sent to the navigation system. After deciding not to go after the jammer, and without directions toward a different target to follow, the weapons defaulted to hit a fail-safe location instead.

The test offers new insight into how weapons that still rely on human instructions to shape their autonomy could work—or not—in combat. “Golden Horde” technology, as the program is known, uses a “playbook” of options to execute a mission. Using a seeker that looks for GPS jammers, a radio to communicate between weapons, and a processor loaded with collaborative algorithms, the bombs can follow the plays they are given but will not find targets that don’t meet those criteria.

“I’m very pleased with [the] results of this first test,” Steven Stockbridge, principal investigator for the Golden Horde program, said in the release. “The team saw good performance from the networked collaborative subsystems and understand the root cause of the weapons not impacting the desired targets. We anticipate readiness for the next flight test.”

The Air Force Research Laboratory and the tech firm Scientific Applications and Research Associates are planning two more CSDB flight tests in early 2021 with four bombs apiece. However, the modified Boeing SDB I is only a testbed for the collaborative tech and isn’t intended for real-life operations, AFRL said.

Golden Horde technology will later be added to “a variety of other weapon systems,” according to AFRL Munitions Directorate boss Col. Garry A. Haase. Air Force Magazine previously reported the service was considering dropping a collaborative version of Raytheon Technologies’s Miniature Air-Launched Decoy from the program. MALD can confuse or jam enemy air defenses to allow friendly aircraft to slip into a protected area.

“We’re still assessing [MALD] right now. It’s still in question whether we see that as existing in the long haul,” Weapons Program Executive Officer Brig. Gen. Heath A. Collins said in an interview last fall. “We’re going to continue with SDB I, and then pivot to both virtual and surrogate platforms as well, and continue a very rapid, regular assessment and evaluation of how to put that [software] onto existing weapons.”

Georgia Tech Applied Research Corp. has worked with the Air Force on the MALD piece of the program.

Golden Horde is one of three high-profile “vanguard” programs that pull resources and attention from across the Department of the Air Force to move faster than typical research projects. The department requested about $72 million for fiscal 2021 and had planned to vet different weapons in the same flight test next year.

“The Golden Horde demonstration with the Small Diameter Bomb flights is an important step on the path to networked collaborative weapon systems. Completion of this first mission sets the stage for further development and transition to the warfighter,” Christopher J. Ristich, director of AFRL’s Transformational Capabilities Office, said in the release.