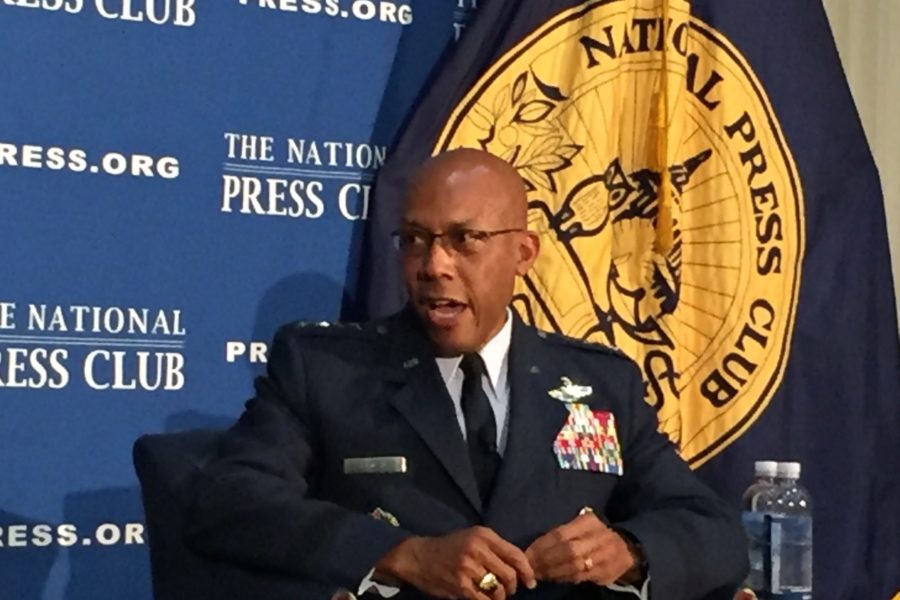 Air Force Chief of Staff Gen. Charles Q. Brown Jr. highlighted the “catastrophic” implications if the Air Force does not change fast enough to keep up with China but added that recent public information about the buildup of Chinese intercontinental ballistic missile silos will help generate the public support he needs.

“It’s kind of good that it’s out there so folks see the pace of change from our adversary,” Brown said in a gaggle after he spoke at the National Press Club on Aug. 6. “It actually helps to validate what we’ve been talking about, why we need this capability.”

Brown said China could overcome U.S. air superiority by 2035, noting how change has largely stalled in the Air Force. When he commissioned in 1984, the United States was developing a new fighter jet every two-and-a-half years. Only four fighter jets have been developed since, he said.

That reality stares at him every day that he walks into the Pentagon.

“There’s a very stark print that I get to look at every day when I come into the Pentagon,” Brown said of the graphic “Wings Through Time” by Robert Emerson Bell that depicts every aircraft ever used in the Air Force as if seen from above. Dozens of planes fly in a chronological transition and color scheme from deep brown to Air Force blue.

Brown specifically described two aircraft on that spectrum: the B-52 and the KC-135. “You look at them on that print—they are closer to the Wright flyer than they are to today. That tells you something about our United States Air Force and how we can change,” he said.

But it’s not about the wow factor of modern weapons or the size of the force—USAF must have the “right mix” of capabilities to defeat China, he said.

There is an urgency to finding that balance, he argued, and the politics of keeping legacy systems or a sizable fleet of older aircraft must be abandoned. That is something China has already done, Brown added.

“They cut the less relevant parts of their force to invest in the part of the force they need to gain an advantage,” he said.

The result is a strategic growth now challenging the U.S. in the Pacific.

“The People’s Liberation Army has the largest aviation forces in the Pacific, the largest conventional missile capability in the Pacific. They are building hypersonic missiles, and they’ve established bases and military strategic points,” he said.

Brown said China has done it all “underneath our nose,” including the “slow and insidious” construction of landing strips and capabilities on South China Sea islands that will allow them to project forward a defense of the mainland.

The U.S. Air Force, meanwhile, must rely on partners and allies in the region who are increasingly bullied by Chinese economic might. U.S. aviators must also learn to operate in a more “austere” environment with simple landing strips and prepositioned capabilities.

The Air Force is the oldest and smallest it’s ever been, yet Brown acknowledged the service might have to get even smaller in order to bring the new technologies that will enable it to compete against peer adversaries such as China.

“I’d rather have a smaller capable force than a larger, hollow force,” he said. “The United States Air Force has some tough decisions as we go forward to make sure we have the capabilities that will be competitive against the threat.”

Part of developing that capability will be to retire single-mission platforms such as the A-10 to invest in multi-mission aircraft capable of operating in a denied environment.

Brown also called for continued investment in the service’s Advanced Battle Management System, which connects sensors and shooters, and to modernize the nuclear triad, though some liberal lawmakers are pushing to scale back the latter due to its high price tag.

In May, Rep. John Garamendi (D-Calif.), the chairman of the House Armed Services readiness subcommittee and a member of the strategic forces subcommittee, argued USAF should “pause” any major recapitalization of its ICBM fleet, insisting the Minuteman III could be life-extended and still be viable through the 2030s. However, senior military leaders argue time is up: The U.S. must modernize its nuclear forces now or risk losing credibility.

One rationale for cutting or delaying the Air Force’s Ground-Based Strategic Deterrent (GBSD), the replacement for the 50-year-old Minuteman III ICBM system, is that China possesses a small number of ICBMs. The new satellite imagery reveals an ambition to vastly expand that capability.

“My concern is that China continues to increase their capabilities at a [fast] rate of change, as far as numbers of particularly aircraft and missiles and ranges of missiles,” Brown said. “We need to get moving at the same pace, if not faster.”