Skip to content
Army Lt. Gen. Michael “Erik” Kurilla, nominee to be the next head of U.S. Central Command, speaks during his confirmation hearing in front of the Senate Armed Services Committee on Feb. 8, 2022. Screenshot
Expand Photo 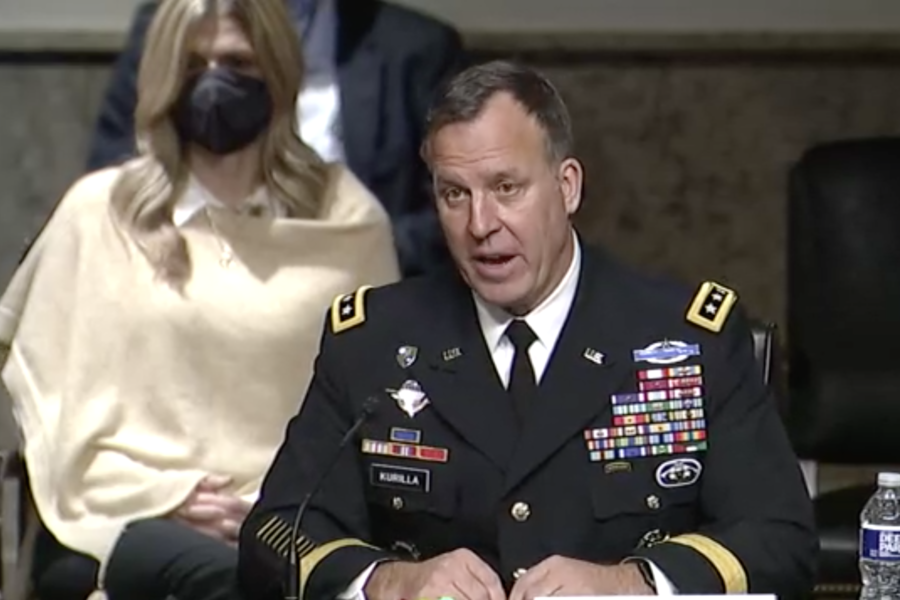 As the U.S. looks to pivot in the Middle East to over-the-horizon counterterrorism operations in Afghanistan and countering the threat of Iran and its proxies, both artificial and human intelligence will be critical, according to President Joe Biden’s pick to lead U.S. Central Command.

Army Lt. Gen. Michael “Erik” Kurilla, speaking during his confirmation hearing in front of the Senate Armed Services Committee on Feb. 8, called Iran the “No. 1 destabilizing factor in the Middle East right now.” At the same time, monitoring terrorist groups such as ISIS-K and al-Qaeda from afar will be “extremely difficult, but not impossible,” he said.

If confirmed, Kurilla, who currently leads the 18th Airborne Corps at Fort Bragg, N.C., would assume command from Marine Corps Gen. Kenneth F. McKenzie Jr., who has led the command since March 2019. Kurilla appears to be on a glide path to confirmation, earning bipartisan praise during the hearing. Still, as CENTCOM faces a pivotal moment, lawmakers offered up plenty of concerns for him to tackle.

In recent months, Iranian-backed militias have become increasingly aggressive in firing rockets and other weapons on American allies such as Saudi Arabia and the United Arab Emirates—in some cases, the strikes have even targeted bases with U.S. personnel.

To counter these actions, Kurilla said, the U.S. needs to provide more evidence of Iran’s support of these militias.

“I have found anytime Iran’s hand behind this is exposed, it is helpful,” Kurilla said, adding that when that happens, “they try to hide their behavior, and it can cause them to not take action for a period of time.”

Exposing Iran’s support, as well as countering its conventional weaponry, will require investment, though. In written responses to advance policy questions from the committee, Kurilla wrote that CENTCOM needs to keep developing “technology, to include artificial intelligence and machine learning platforms and programs, to increase our ability to detect, defend, and respond” to Iran.

Asked to expand on that answer during the hearing, Kurilla noted that the 18th Airborne Corps has taken a four-pronged approach to embracing artificial intelligence under his leadership, centered on “culture, data literacy, data governance management, and our infrastructure, i.e. cloud computing and cloud computing on the edge.”

The culmination of that has been the Corps’ quarterly Scarlet Dragon exercises, which involve all six services, Kurilla said. These exercises have principally focused on target detection—using AI to sort through hundreds of targets and identify the most important ones in a matter of seconds and minutes, instead of hours and days.

“The last exercise had over 40 aircraft … and it culminated in a Marine F-35 dropping a live 1,000-pound bomb on an artificial intelligence-derived grid that was one meter off from the surveyed grid,” Kurilla said. “And we do these exercises quarterly to improve the capability of the targeting ability of the Corps. I would like to take that, if confirmed, down to CENTCOM and expand upon that.”

A key lesson from these exercises, Kurilla said, has been that humans need to work in conjunction with the AI systems to realize the greatest possible benefit. When that happens, the results have been encouraging.

“We were able to exponentially increase that capability to sort through hundreds of targets, to pick the right targets, to be able to strike, moving machine to machine and directly to an aircraft,” Kurilla said.

Sen. Jack Reed (D-R.I.) was quick to note that the usefulness of such technologies wouldn’t be limited to countering Iran, and Kurilla agreed.

“It has capabilities for counterterrorism as well,” he said.

The counterterrorism mission in CENTCOM has taken on a new look in recent months in the aftermath of the U.S. withdrawal from Afghanistan.

In keeping with comments from other top Pentagon officials, Kurilla said Feb. 8 that the administration’s plan to rely on over-the-horizon operations to monitor terrorist threats will be hard, but doable.

One of the main reasons for that difficulty, Kurilla noted, is the geography of it all.

“The biggest challenge for Afghanistan is that it’s a landlocked country, so we rely on other nations to be able to enter Afghanistan,” he said. “The distances required to fly is great. We spend approximately two-thirds of the time just flying there and getting back.”

Even before the final withdrawal from Afghanistan, U.S. officials were reportedly working to secure basing agreements with neighboring countries to reduce those long flight times—currently, the closest base is Al Udeid Air Base in Qatar, hundreds of miles away.

However, those talks have still yet to yield any agreement. Kurilla noted that “there are discussions happening right now.”

And though he said he would need to do a further assessment once confirmed, Kurilla acknowledged, “It is resource intensive, to be able to do the finding and then the fixing, and the finishing of those targets that you’re going after. I think we need to reinvest in a lot of our intelligence capabilities, our human intelligence capability, that was lost during the withdrawal.”