Skip to content
A Russian air force Su-30SM fighter prepares to take off from an undisclosed location. The crews of Su-30SM fighters of the Russian Aerospace Forces and the Air Force of the Republic of Belarus conduct a joint patrol during joint exercise Allied Resolve 2022, Feb. 14, 2022. Russian Ministry of Defense photo.
Expand Photo 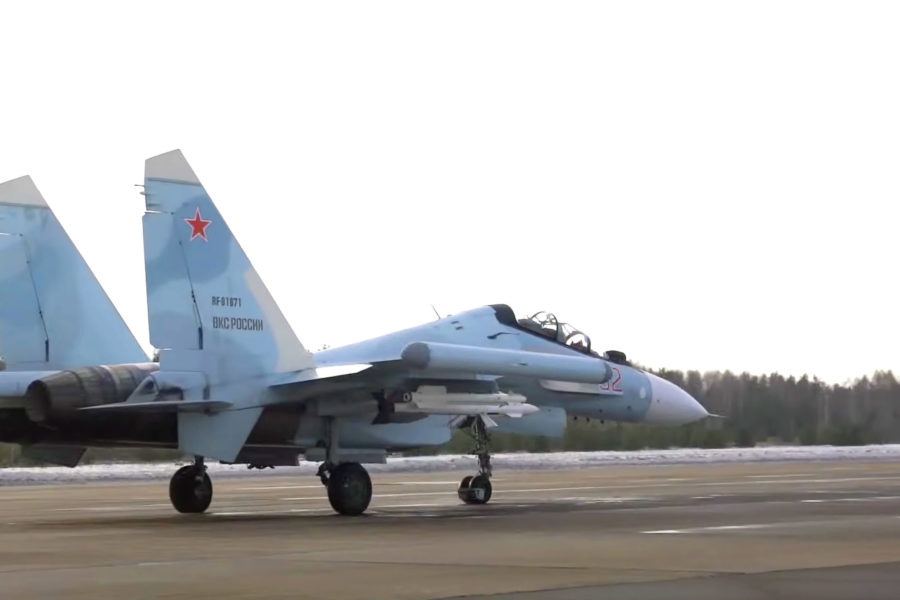 ‘Cautious Optimism’ as Moscow Hints at Diplomacy, Withdrawal Ahead of NATO Meeting

NATO defense ministers from across the alliance arrived in Brussels on Feb. 15 eager to verify Russian claims that it is withdrawing forces and open to a diplomatic solution to end the Russia-Ukraine crisis, even as tens of thousands of Russian troops remained on Baltic borders.

With more than 130,000 Russian troops surrounding Ukraine on three sides and a continuous buildup of military equipment, Russian President Vladimir Putin appeared to change course Feb. 14. In a televised exchange with Putin, Russian Foreign Minister Sergey Lavrov suggested a diplomatic solution was still possible. Meanwhile, the Russian Ministry of Defense announced Feb. 15 that some units had completed their tasks and were returning to their military garrisons.

But NATO is hesitant to take Putin at his word.

“What we need to see is a significant and enduring withdrawal of forces, troops, and not least [of which] the heavy equipment,” NATO Secretary-General Jens Stoltenberg said at a pre-ministerial press briefing Feb. 15, in response to a question about Lavrov’s comments a day earlier.

“So far, we have not seen any de-escalation on the ground from the Russian side. Over the last weeks and days, we have seen the opposite,” Stoltenberg added. “A continued military buildup with more troops, more battlegroups, more high-end capabilities, artillery, air defense missiles, and a lot of support elements that makes it possible for Russia to move into Ukraine for full-fledged invasion or a more limited military incursion with hardly any warning time at all.”

However, Stoltenberg said there is “some ground for cautious optimism” based on the signaling from Moscow.

“The units of the Southern and Western military districts, having completed their tasks, have already begun loading onto rail and road transport and will begin moving to their military garrisons today,” the story read.

U.S. permanent representative to NATO, Ambassador Julianne Smith, told reporters early Feb. 15 that she was hopeful for a diplomatic solution and that claims of a drawdown by Russia must be verified.

“This is something that we’ll have to look at closely and verify in the days ahead,” Smith said during a teleconference from Brussels, noting that Russia made a similar claim in late December.

“What’s important is that we try to verify based on the fact that we’ve seen other instances in the past where Russia has claimed to be de-escalating, and in fact, facts on the ground didn’t prove that to be true,” she added.

After the comments, reports emerged that Ukraine’s defense ministry and two banks came under cyberattack. Defense officials have of late voiced concerns that Russia would commence any conflict with cyber, informational, and hybrid warfare tactics.

Meanwhile, the ranking members of House committees for Armed Services, Foreign Affairs, and Intelligence introduced a bill to sanction Russia now instead of threatening sanctions should Putin order an invasion of Ukraine. The bill cites Russia’s military buildup and the hybrid warfare tactics already committed against Ukraine, and calls for additional support to Ukraine and allies on NATO’s eastern flank.

Smith underscored that the U.S. and NATO position was two-track: to pursue diplomacy by welcoming continued dialogue with Russia; and to reinforce NATO against potential Russian aggression.

The U.S. has already unilaterally reinforced eastern flank allies by sending 5,000 troops to Central and Eastern Europe, including 3,000 Soldiers from the Army’s 82nd Airborne Division to Poland and 1,000 from a U.S. Stryker squadron at Vilseck, Germany, to Romania.

In addition to troop movements, the U.S. Air Force has now sent eight F-16s and 16 F-15s to the eastern flank.

The U.S. also maintains on high alert an additional 8,500 troops in the United States to act as a NATO Response Force if called upon.

A NATO official from the eastern flank told Air Force Magazine the alliance has “not seen anything specific” with regard to threats emanating from Russia, but that hybrid activities, including propaganda against border areas of Poland, Lithuania, and Latvia, continue.

A heavy Russian troop presence in Belarus, which borders the Baltic countries, is also worrying because it has shrunk indications and warning time.

“I think everybody is waiting and watching with caution for those messages to be confirmed,” the official said.

A Feb. 14 move by the Russian lower house Duma to draft resolutions recognizing the breakaway republics of Donetsk and Luhansk, in southeast Ukraine, as independent states also worries NATO.

“That would obviously be a new shift in in the escalation,” Smith said, adding that the recognition would violate Ukraine’s territorial integrity and break Russia’s commitment to the Minsk protocol, which reduced conflict in 2014 after Russia invaded Ukraine and annexed Crimea.

Defense Secretary Lloyd J. Austin III was scheduled to leave Washington, D.C. Feb. 15 to attend the Meeting of NATO Ministers of Defence, scheduled for Feb. 15-16, before traveling on to Poland and Lithuania, where he will meet with his counterparts and American troops. Before leaving Brussels on Feb. 17, Austin and the other defense ministers of the 30-member Alliance will meet with the defense ministers of aspiring members Ukraine and Georgia.

Putin has made clear that he does not want NATO to expand eastward, and he has specifically called for barring Ukraine and Georgia from entering the alliance. NATO and the United States have stood firm on the so-called NATO “open-door policy” that allows any country to pursue membership.

Still, NATO leaders believe there is a possibility of averting a Russian invasion.

“We believe the best path is through dialogue and de-escalation. And we have urged them at every turn to come back to the table,” Smith said of dialogue with Russia. “We do not understand fundamentally, none of us do, what is inside President Putin’s head. And, so, we cannot make any guess how, where all of this is headed.”