Cadet First to Solo in T-53A 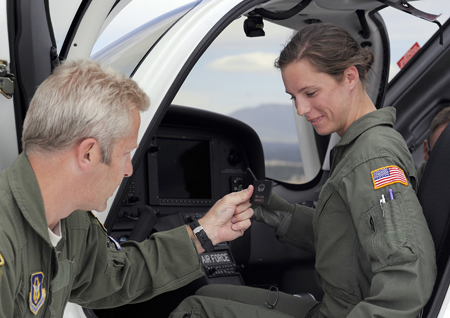 1st Class Staci Rouse became the first-ever student at the Air Force Academy to make a solo powered flight in the T-53A, announced academy officials. She made history for the academy’s powered flight program by taking off on Sept. 7 in one of the academy’s newly acquired T-53As, flying her pattern once, and then landing, after which her classmates and instructors met her. “I had much more confidence flying the aircraft than I expected I ever would after my first flight,” said Rouse, a senior with Cadet Squadron 40 and a native of Woodbridge, N.J. She added, “I was overjoyed to see everyone waiting for me after the flight because they all helped me so much.” Rouse’s instructor pilot, Lt. Col. Scott Oskvarek, who is an Air Force Reservist with the 70th Flying Training Squadron, said Rouse “was definitely ready for solo and well-qualified to be the first solo cadet.” He added, “I’m extremely proud of her accomplishment.” (Colorado Springs report by Maj. Christopher Reteneller)