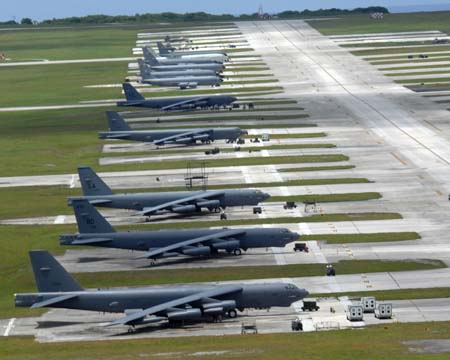 mbers of the 20th Expeditionary Bomb Squadron flew surge missions and launched six of their B-52H bombers on large-scale training flights from Andersen AFB, Guam, Sept. 4-5. The two-day exercise was meant to demonstrate the Air Force’s capability to activate heavy air support at a moment’s notice. “This is the first time six B-52s have taken off from Andersen for this type of mission since Operation Linebacker II,” said Brig. Gen. Philip Ruhlman, commander of Andersen’s 36th Wing. (Linebacker II was an intense US bombing campaign of North Vietnam in December 1972 to compel the Hanoi government to the negotiating table.) During the training surge, the bombers flew for more than 60 hours and simulated launching joint air-to-surface standoff missiles and conventional air-launched cruise missiles on simulated targets. The 20th EBS arrived on Guam in June from Barksdale AFB, La., where it is part of the 2nd Bomb Wing. It relieved another Barksdale B-52 unit as part of the US policy to maintain a continuous bomber presence in the Pacific region on a rotational basis. (Andersen report by SSgt. Stephen Teel)