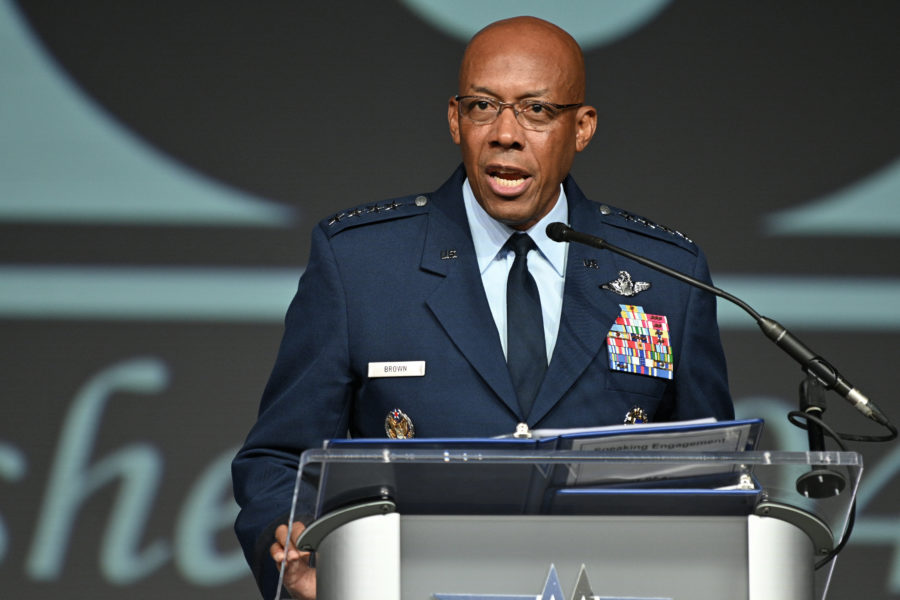 The Air Force’s internal analysis has left Chief of Staff Gen. Charles Q. Brown Jr. confident in the capacity of the service’s combat aircraft fleet—especially when considering what the United States’ partners and allies can bring to the fight.

Speaking with reporters at AFA’s Air, Space & Cyber Conference, Brown also reaffirmed his vision of a “4+1” fleet of fighters and explained why the Air Force has shelved plans for an F-16 replacement for the time being.

With the Air Force’s fleet of planes getting older and smaller over time, a recent analysis from the Mitchell Institute for Aerospace Studies laid out the case that the service “lacks the force capacity, lethality, and survivability needed to fight a major war with China, plus deter nuclear threats and meet its other national defense requirements.”

In particular, retired Lt. Gen. David A. Deptula and retired Col. Mark A. Gunzinger, both USAF, focused their analysis on combat aircraft and concluded that the service’s focus on “capability over capacity” has resulted in a critical shortfall.

“The analysis we did in our own internal attack air study took a look at what the numbers would be. I understand Mitchell, and I haven’t talked to them—they are strong advocates that probably push it a bit harder,” Brown said. “But we’ve done a lot of analysis associated with this and understand … we can have some trade space between fourth-gen, fifth-gen, and overall capacity.”

And while the Mitchell Institute paper broke down the Air Force’s declining force size, it didn’t count the fighters and aircraft from allied nations, presenting an incomplete picture, Brown said.

“We do a lot of our own analysis as if we’re doing this by ourselves. … We cannot do this alone. And our partners have a lot of capacity and capability,” Brown said. “I would highlight the aspect of, I was with the Swiss attache today and he mentioned they just signed for the F-35. And so what we’re seeing is a lot of our partners actually have a lot of capabilities as well, more so than we have in the past, which for those concerned about capacity, you got to account for all the capacity within our allies and partners.”

Switzerland is just the one of the latest countries to move toward buying the F-35—the Czech Republic, Greece, Germany, and Canada have all taken steps to purchase the fifth-generation fighter in recent months, while Belgium, Denmark, Italy, the Netherlands, Norway, Poland, the U.K., Finland, Japan, South Korea, and Singapore have either accepted F-35s into their fleets or are in line to do so.

In March, Air Force Gen. Tod D. Wolters, then the head of U.S. European Command, predicted there would be 550 F-35s spread across Europe by 2030—that estimate marked an increase of 100 jets from his previous guess in June 2021, and it may already be outdated.

Brown also told reporters that he is “still committed” to his plan of reducing the Air Force’s fighter fleet to four main types—the F-35, the F-22, to be replaced by the Next Generation Air Dominance platform, the F-16, and the F-15 E/F-15EX.

The “plus one” in the “4+1” plan is the A-10, the beloved but aging close air support aircraft that leaders have frequently tried to divest, only to be blocked by Congress. Brown’s focus on that platform has been “less,” he said, “as we’ve been able to really start to focus on … the four fighters.”

That commitment to the four comes even as the Air Force revealed plans to accelerate its purchase of F-15EX fighters in the 2023 budget but then reduce the overall planned size of the fleet from 144 to 80.

“One of the things as we move forward is also looking at how the F-15EX [will] have a healthy fleet, and it’s a conversation we’re having not only in FY 23 but as we look forward and build the budget for 2024,” Brown said.

The F-16 also remains a part of the Air Force’s plan for the foreseeable future, Brown said—officials indicated recently that the service will keep the fighter into the 2040s and that it is not necessary to launch its successor yet.

That successor, referred to as “MR-F” or “MR-X,” first showed up in planning documents in 2021 that indicated the Air Force was looking to an F-16 successor in the mid-2030s—but plans changed under Air Force Secretary Frank Kendall, Brown indicated.

“We didn’t have the secretary we have today. So it’s been a good dialogue between myself and Secretary Kendall as we work, and even when we talked about that capacity, that was not a decision we needed to make now,” Brown said. “My focus area right now is to ensure that we continue to modernize the fleet. And so as I look at some of the earlier block F-16s and go through various budget cycles, I don’t necessarily want to buy back a lot of capacity that we want to retire. I actually would like to buy new capability to replace that.

“And so that’s where my focus is as a chief right now. And then at some point, there may be potential to start talking about what might come after the F-16. Right now, it’s the F-35 we’re putting all of our energy into bringing online.”