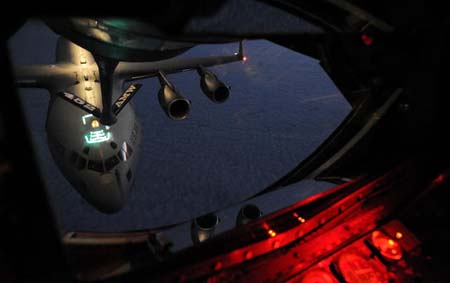 Rep. Norm Dicks (D-Wash.) and Rep. Todd Tiahrt (R-Kan.), Boeing tanker proponents, say the Pentagon remains convinced its KC-X draft request for proposals is sound, refuting a recent implication by lawmakers who support the Northrop Grumman-EADS team that the Pentagon was having second thoughts. Dicks and Tiahrt talked with Deputy Defense Secretary William Lynn Thursday, the day after Lynn’s meeting with Sen. Jeff Sessions (R-Ala.) and Sen. Richard Shelby (R-Ala.). Tiahrt told Reuters news service that the Pentagon has found “some minor details that they need to adjust.” And, in a statement, Tiahrt noted, “The objective to purchase a cost-effective, medium-sized tanker replacement will not be changed.” In the same statement, Dicks asserted that there has already been competition for the tanker. He said Lynn assured them there was no intention “to alter the tanker RFP solely for the purpose of guaranteeing that there would be competition.”