Skip to content
A NATO Airborne Warning and Control System aircraft takes off for an airshow in Estonia in July 2019 with a special decal on its fuselage celebrating the alliance’s 70th anniversary. NATO photo.
Expand Photo 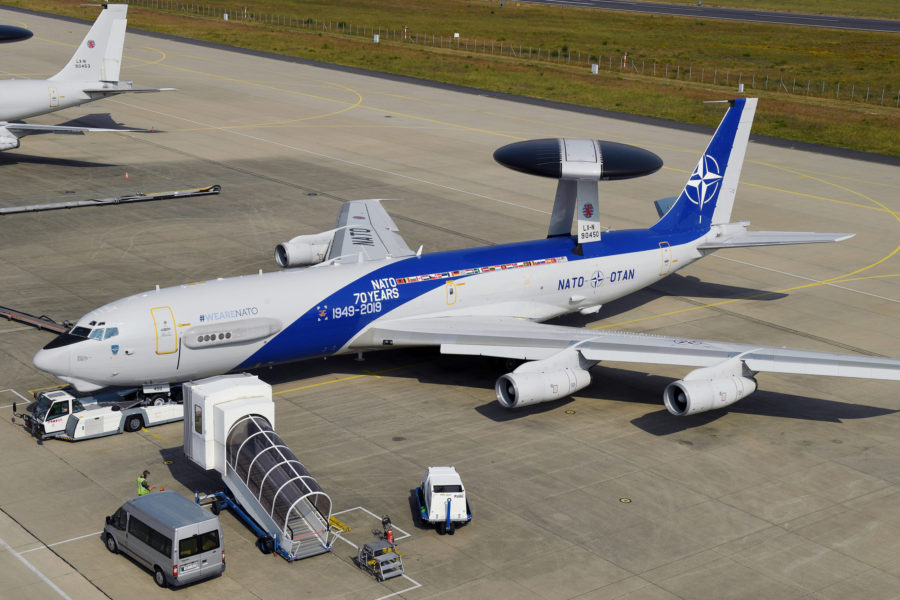 An industry team led by Boeing will study how best to replace NATO’s E-3 AWACS system, which will retire in 13 years, under a contract awarded March 31 by NATO’s support and procurement agency. Boeing is doing a similar study for the U.S. Air Force centered on the E-7 Wedgetail platform, which Air Force leaders recently hinted could be the replacement for retiring the Airborne Warning and Control Systems in the U.S. fleet.

The contract covers a “risk reduction and feasibility study” of “future air surveillance command and control concepts,” Boeing said in a statement. The company will “guide capability development efforts by … alliance members” ahead of the NATO AWACS retirement.

The contract was awarded to the ABILITI industry team, formed in 2019, which also includes Indra of Spain; Leonardo of Italy; Thales of France; ESG Elektroniksystem-und-Logistik-GmbH of Germany, and Mott MacDonald of the U.K. The contract’s value was not disclosed, and it did not specify a particular solution.

The study will help NATO “refine concepts to replace the capabilities currently provided by its fleet of AWACS aircraft,” Boeing said.

The U.S. Air Force has 31 AWACS in its fleet, with 15 slated to retire in the fiscal 2023 President’s budget now before Congress.

The U.S. Air Force awarded Boeing a contract in the fall of 2021 to study how the Boeing E-7 Wedgetail, flying with Australia and Turkey, and in production for the U.K., could be adapted rapidly to meet USAF’s AWACS needs. The Air Force’s AWACS are all well over 30 years old and suffer from parts shortages and poor availability rates hovering at just over 50 percent.

“Our AWACS fleet is challenged with maintainability as well as capability,” deputy chief of staff for plans and programs Air Force Lt. Gen. David S. Nahom said at an AFA virtual event March 30.

Nahom said the E-3 lacks the needed airborne moving target indicator (AMTI) capability or the ability to see things moving through the air.

“We do need to recapitalize that we can go to something modern,” he said, acknowledging that allies use the E-7. “Our acquisition professionals are doing due diligence with industry to make sure we know everything that’s out there, before we make a decision.”

The Air Force study has Boeing performing “studies, analyses, and activities required to ascertain the current E-7A baseline configuration and determine what additional work would be necessary” to make the E-7 compatible with USAF “configuration standards and mandates.”

Nahom said the call to retire 15 AWACS is to free up $227 million to start developing its successor.

Air Force Secretary Frank Kendall, briefing reporters ahead of the budget release, said the Air Force likely will move to obtain the E-7 but must first do market research to establish that there are no viable alternatives.

Air Force officials have said the turboprop-powered Northrop Grumman E-2 Hawkeye and Saab Erieye systems are not fast enough and don’t have the necessary altitude capability to meet USAF’s requirements. The Air Force wants to field an AWACS replacement starting in five years.

“The leading candidate, quite obviously, is the E-7,” Kendall said. “But we want to do our due diligence before we before we make the final decision.”

The service views the E-7 as a “bridge” capability to an as-yet-undefined future system of air and ground moving target indication predominantly based in space. The NATO study likely will also examine both near-term and long-term solutions for AMTI.

The E-7 is not an open-architecture system but could be modified to have one, Boeing officials have said.

“The combined engineering and aerospace expertise of our team will ensure we deliver a technical concept that provides the most effective means of addressing NATO’s future surveillance, command, and control needs,” Boeing director of EU and NATO government affairs Kim Stollar said.