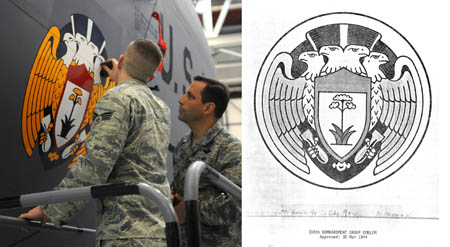 The World War II emblem of the 100th Bomb Group—a four-headed eagle—now adorns the 100th Air Refueling Wing’s KC-135 flagship at RAF Mildenhall, Britain. On the unit’s 70th anniversary, airmen at Mildenhall “share a bond with the men who flew under this emblem in one of the greatest conflicts this world has ever seen,” said Col. Christopher Kulas, 100th ARW commander, during the unveiling ceremony on March 14. “This airplane now serves as a visual reminder of that bond,” he emphasized. The 100th Bomb Group was known as the “Bloody Hundredth” for its staggering losses in daylight raids over Germany during World War II. Its “square-D” marking, worn by its B-17s, is also painted on the flagship tanker’s tail. “It’s great to have tail [number] 0100 back in the ‘Bloody Hundredth’ as we celebrate our heritage year,” said Kulas. (Mildenhall report by SSgt. Austin May)