Skip to content
A B-52H Stratofortress lands on the flight line at Barksdale Air Force Base, La., Aug. 28, 2020. B-52s from Barksdale returned home after evacuating to Minot Air Force Base, N.D., to avoid possible damage from Hurricane Laura, which was the first storm in 15 years to reach Barksdale as a Category 1 or higher. Air Force photo by Senior Airman Tessa B. Corrick.
Expand Photo 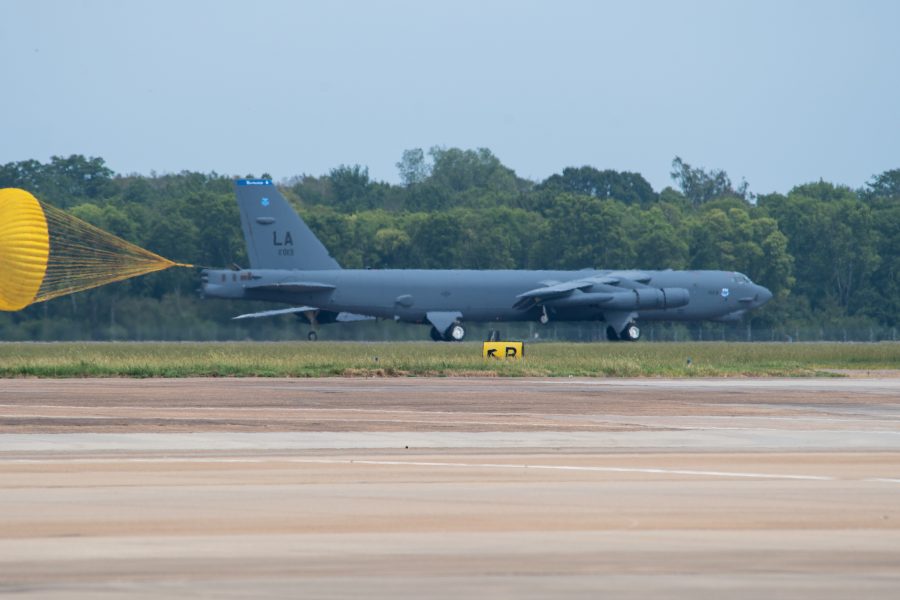 The 2nd Bomb Wing’s B-52s have returned to Barksdale Air Force Base, La., and operations there have returned to a normal operating tempo just two days after Hurricane Laura swept toward nearby Shreveport and threatened grave damage, a wing spokesman said.

Laura was still a Category 1 storm pushing winds in excess of 85 miles per hour when it passed within a few miles of Barksdale, in northwest Louisiana, but the base itself saw far less fierce winds and only suffered minor damage and flooding, the spokesman said. Airmen on base took precautionary measures, such as boarding up windows and deploying sandbags in areas prone to flooding during heavy rains.

“Although minor cleanup efforts will continue, damage was deemed minimal and base leadership has determined the installation is ready to resume normal operations,” the spokesman reported. Damage included some downed trees and an interruption of power for some off-base.

Col. Mark Dmytryszyn, 2nd Bomb Wing commander, thanked “Team Barksdale and our Ark-La-Tex partners for their energy and attentiveness in preparing for the storm, thus enabling a speedy return to normalcy for our warrior Airmen,” he said in a statement for the press. “Our long-range strike capabilities were unaffected, and … we remain at the ready for the nation.” As a precautionary measure, most of the base’s roughly 47 B-52H bombers relocated to Minot Air Force Base, N.D., USAF’s other B-52 base, for two days while the storm passed.

Statewide, Louisiana recorded at least 10 deaths due to the hurricane, mostly in the southwestern coastal areas, where the storm came ashore as a powerful Category 4 hurricane with winds in excess of 135 miles per hour. A forecast storm surge was not as bad as initially feared, but destruction was widespread in the portion of the state near Lake Charles. Louisiana authorities predict power and water outages in the coastal areas near Texas could last for weeks.