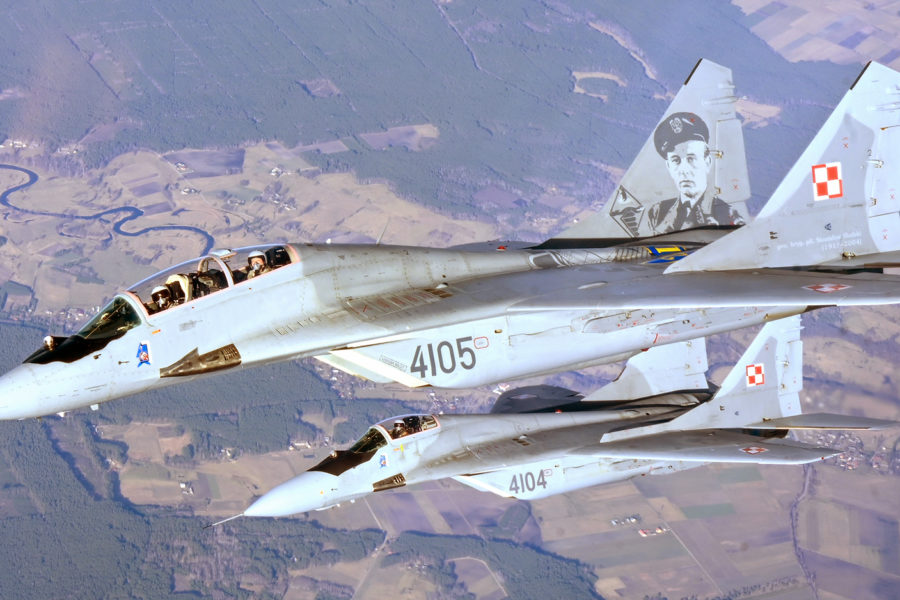 Backfilling NATO MiG Transfers to Ukraine Not Quick or Easy

If Poland, Romania, or other NATO countries transfer their Russian-made combat airplanes to Ukraine, “backfilling” those jets with American-made fighters, as Secretary of State Antony Blinken has suggested, wouldn’t happen rapidly.

Blinken, appearing on a number of Sunday TV talk shows, said Poland has a “green light” from the U.S. to send some of its obsolete, Russian-made jets to Ukraine. The U.S. would in turn “backfill” the aircraft so Poland or other countries wouldn’t have a deficit of combat air power for themselves.

“We’re talking with our Polish friends right now about what we might be able to do to backfill their needs, if in fact they choose to provide these fighter jets to the Ukrainians,” Blinken said on CBS’s “Face the Nation.”

Ukrainian President Volodymir Zelensky made a Zoom call with a number of U.S. lawmakers on March 5 asking for manned and unmanned combat aircraft, and further shipments of anti-tank weapons. Senators Rob Portman (R-Ohio) and Jeanne Shaheen (D-N.H.) sent a letter to President Joe Biden saying they would work to get Congress to provide any funds necessary for an aircraft transfer.

However, the F-16 production line has only recently re-opened, in a new location, and it will be a while before it starts delivering completed aircraft. The F-35 production line is nearing maximum capacity, and a Lockheed Martin official said it would take 36 months from contract signing to delivery of new aircraft. “Actual production time is 18 months,” the official said.

Before Blinken made his remarks, Polish President Andrzej Duda tweeted that Poland “won’t send its fighter jets to Ukraine” or allow it to use Polish airfields. “We significantly help in many other areas,” he said.

Ukraine could not accept combat aircraft directly from the U.S. because Ukrainian pilots are not trained to fly American types and Ukraine lacks the maintenance gear and weapons needed to support them. It could make ready use of Russian types from Poland or other former Warsaw Pact countries still operating Soviet-type aircraft.  Such transfers are allowable under NATO rules because they are bilateral moves and not an alliance action.

Bulgaria, Poland, Romania, and Slovakia all have the kinds of Russian-made aircraft Ukraine could fly, including MiG-29s. American types operated by those countries include 48 F-16s in service with Poland, which has also ordered 32 F-35s, with options for up to 48. Romania operates 17 F-16s and recently bought 32 more, second-hand, from Norway. Slovakia has ordered 14 F-16 Block 70 jets, the first of which are to arrive next year, and Bulgaria has officially ordered eight F-16 Block 70s and has requested eight more.

Providing F-16s or F-35s would be problematic, though, because wherever they came from, it would produce an immediate deficit not quickly restored. The options are as follows:

A Lockheed spokeswoman said “decisions regarding new production jets, transfers of jets between customers, as well as upgrades of current fleets, are determined by the U.S. government. We follow the guidance of those determinations.”

Now that the F-16 production line has been re-established in Greenville, S.C.—where the Block 70/72 is the new production standard—the company is planning to begin flight testing the first jet produced there “in early 2023,” she said. The line was moved to make room at Fort Worth for expanded F-35 production, and to co-locate the production line with a nearby depot facility for F-16s, which recently regenerated its first aircraft.

The first F-16 to be produced at Greenville will go to Bahrain.

In a March 3 interview with Air Force Magazine at the AFA Warfare Symposium, Lockheed Aeronautics Vice President Gregory M. Ulmer said, “We are on contract for 122 new F-16s,” which will be delivered at a peak rate of about four a month through the mid-2020s. Ulmer said the company anticipates a potential market “from 300 to 500 more beyond that.”

Ulmer said Lockheed did the first F-16 fuselage mate at Greenville “in the last 30 days.” That was “a little late to our plan” because of supply chain issues due to the COVID-19 pandemic, he said. The company has also been challenged getting a sufficient number of workers at Greenville, as it is competing with factories nearby making Michelin tires and BMW automobiles. Ulmer said Lockheed offered jobs to 100 people at a recent job fair, versus a need for 300 workers.