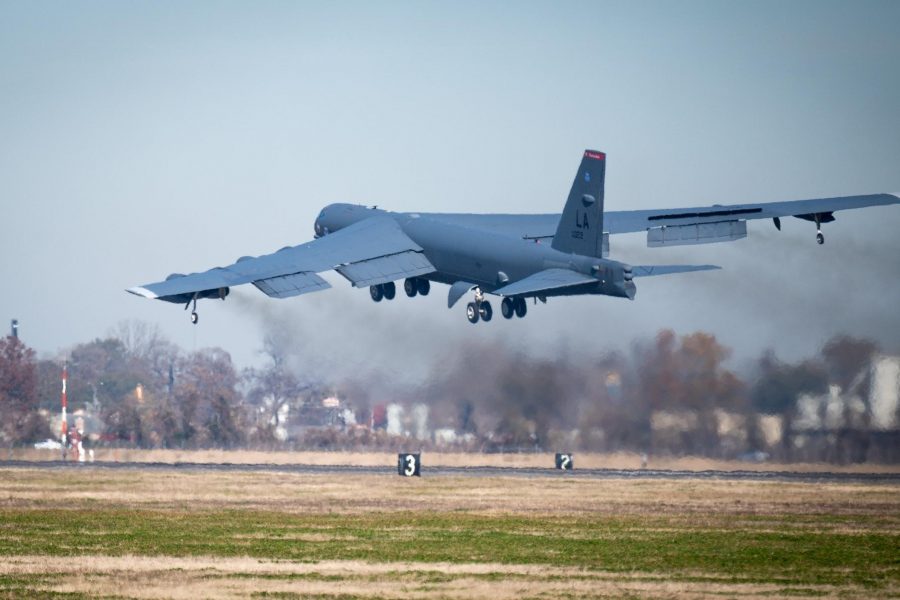 B-52s Fly Direct to the Persian Gulf from Barksdale

Two B-52s flew directly to the Persian Gulf from Barksdale Air Force Base, La., in what the military says is a message of deterrence to Iran.

The bombers, from the 2nd Bomb Wing, took off from their home base Dec. 9 and integrated with other U.S. Air Force and partner nation aircraft during the long-range mission, according to a U.S. Central Command release. The tasking came on a short notice, with the goal of proving the U.S. can send bombers anywhere, anytime.

“The ability to fly strategic bombers halfway across the world in a non-stop mission, and to rapidly integrate them with multiple regional partners, demonstrates our close working relationships and our shared commitment to regional security and stability,” U.S. Central Command boss USMC Gen. Kenneth F. McKenzie Jr. said in a release.

It was the second time in less than a month that B-52s flew directly to the Middle East from the continental United States. On Nov. 21, B-52s from the 5th Bomb Wing at Minot Air Force Base, N.D., flew a long-range, short-notice mission to the region, where they integrated with KC-10s, KC-135s, F-15Es, and F-16s deployed to CENTCOM.

Earlier this year, the Air Force pulled its bombers out of the region after basing them at Al-Udeid Air Base, Qatar, almost continuously since 2001. Initially, a deployed group of B-52s moved from Al-Udeid to Naval Support Facility Diego Garcia before the service moved to sending the long-range flights from home bases. Air Force Global Strike Command said in April that it no longer wanted to base its “strategic assets” within Iran’s ballistic missile engagement zone.

McKenzie, speaking Dec. 10 at a Defense One virtual event, said there was no specific threat from Iran, but the U.S. recently has taken steps to reduce its footprint in the region, such as drawing down the amount of American personnel at the embassy in Baghdad, which he called a “smart judgment made based on the threats we see out there right now.”

There could be an increased threat from Iran as the one-year anniversary of the U.S. killing of Quds Force leader Qassem Soleimani approaches, combined with the upcoming U.S. Presidential transition. Additionally, the lack of a coherent chain of command between Iran and its proxies creates a concern that the proxy forces would act on their own, McKenzie said.