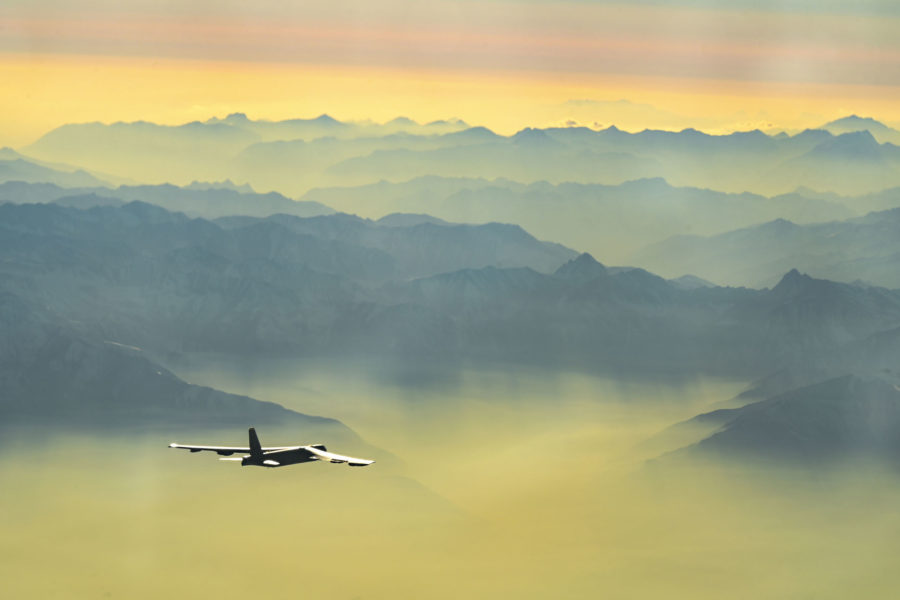 B-52 Will Get at Least One New Designation With Radar, Engine Upgrades

The B-52H will be redesignated the B-52J or possibly B-52K when it gets a new radar and new engines, but the Air Force hasn’t yet decided what will constitute the new B-52 variant, according to Col. Louis Ruscetta, senior materiel leader for the program.

The program has also developed a new estimate of what the re-engining will cost and is about to submit it to Congress, as directed under last year’s defense bill, but Ruscetta said reports of a 50 percent overrun are far overstated. In fact, he said he sees no overruns on the horizon.

The radar and engine program represent “the largest modification in the history” of the B-52, Ruscetta told reporters at Air Force Materiel Command’s Life Cycle Industry Days conference in Dayton, Ohio. The change from B-52G to B-52H in 1961 was mainly the switch to the TF33 engine, but the new package includes radar, engines, communications, pylons, cockpit displays, and the deletion of one crew member station, meaning “it makes sense” to have a new designation, Ruscetta said.

The question is whether there will be two designations, because some of the new APG-79B4 radars will be installed on the bombers before the new Rolls-Royce F130 engines, Ruscetta said. The B-52 pilot operating manual and maintenance manuals will be re-written for the version with the new radar; and will be re-written again when the engines are changed, Ruscetta said.

“What the Air Force, along with Global Strike Command, needs to look at, is how do we define” the new variant, he said. The decision will be made sometime within the next two years, before installations begin, Ruscetta added.

Ruscetta described the new active, electronically scanned array radar as a “game changer” for the B-52, especially as the Air Force migrates toward the two-bomber fleet of B-21s and B-52s. The APG-79 is effectively the same radar as on the export version of the Navy F/A-18 fighter, with the array turned “upside down” so it looks more down at the ground than up at the sky, Ruscetta said.

“We will have fighter-quality radar … to support air-to-ground operations,” he said, and be better able to operate “with other coalition partners” because the bomber will be able to use the same sensor format. It will be able to scan farther, “guide weapons in flight,” and improve the bomber’s situational awareness, he said. The B-52 today is still flying with its 1960s mechanical-scan radar.

The radar mod just passed critical design review “a few months ago, so we are now in the next stage of this program,” he said. That entails “building up the systems integration lab” (SIL) that will vet the radar as it affects the other parts of the B-52, to ensure no harmful or unintended side effects of the new equipment ahead of flight testing. The SIL will be a full representation of the system, minus its cooling equipment.

The new radar will be “segregated” from the B-52’s electronic warfare suite, Ruscetta said, but the new gear takes up less volume than the old and “gives us some growth space” for additional EW functions.

The program office is working on how the installations of the radars, engines, and other gear will be staged. Some bombers will get new radars before they get new engines, but later, when both are available, the preference will be to do the mods together, organically, during regular depot visits, when the aircraft are already “opened up,” Ruscetta said.

“We have an integration team looking at … the dependencies” of all the new equipment from the perspectives of size, weight, and power, Ruscetta said, to fashion the most logical sequence of installations. Minimal downtime is necessary to make sure Air Force Global Strike Command doesn’t dip below the operationally required minimum numbers of bombers.

“We are looking for those friction areas” that could spell logjams in the process, Ruscetta said. “We’re looking to minimize and reduce what could go wrong,” he said, “and if things do go wrong, how can I still operate?”

At some point, there will be an aircraft that will have all the new mods on it, and “we may do some regression testing” at that point, but the goal is to have shaken out any problems before that milestone.

“It does not make sense to have multiple [installation] lines, with multiple aircraft down at once,” Ruscetta said, so the plan is to do as much of the mod as possible at once, during depot.

Flight testing with the new radar will start in late 2025, and the first production versions should be built around the same time. They’ll be installed in early 2027, Ruscetta said, and initial operational capability (IOC) with the radar will consist of 12 aircraft as the required assets available for the declaration. The first aircraft will be operational with the new engines circa 2030.

A major acquisition program doesn’t usually have to submit a Selected Acquisition Report until after Milestone B—and the B-52 Commercial Engine Replacement Program (CERP) isn’t there yet—but the program has developed a cost estimate and submitted it to Headquarters, Air Force, and it will go to Congress “in the very near future,” Ruscetta said.

Reports of a 50 percent increase in CERP costs were “taken out of context,” Ruscetta said. The business case analysis done in 2017 wasn’t comprehensive and didn’t anticipate all the ramifications of the upgrade, and cost-estimating models have been updated. The Air Force used the KC-135 re-engining as its model but is now using the more recent C-5 re-engining as a guide to costs.

“I don’t have one program related to the engine replacement … that is in overrun,” Ruscetta said, “and I don’t foresee an overrun … in the future.”

In a later email, Ruscetta said the program “has seen minor cost growth … of about 12 percent” since the first Air Force independent cost estimate in 2019.

“The FY22 NDAA established a cost baseline for the CERP program using the FY’20 cost estimate. Currently, we have seen estimated growth of 3% from the congressionally mandated baseline.”

The report will “give Congress a full update on the status of the CERP,” Ruscetta said. There has been cost growth discovered due to the complexity of integrating the new engines, controls, and displays needed on the B-52.

“It is more than just new engines,” he said. It’s “new pylons … generators … fuel lines … cockpit displays.” It is “a much bigger effort than just Rolls-Royce.” Boeing is the integrator of the all the B-52 upgrades.

“We just held our engine subsystem preliminary design review at Rolls-Royce … it was a very successful event,” he said, and showed a strong partnership with Boeing. The full system-level PDR will be held later this year. “The design is fairly stable,” Ruscetta said. The engine and radar upgrades were intended to have almost no new development.

The major challenge to program schedule now is not design, but the supply chain, Ruscetta added, “just like any program managing in a … COVID environment.”

Editor’s note: This story was updated at 9:20 p.m. Eastern time to include the Air Force’s estimates of cost growth on the B-52 CERP as well as the required assets available necessary to declare initial operational capability with the new radar in 2027.