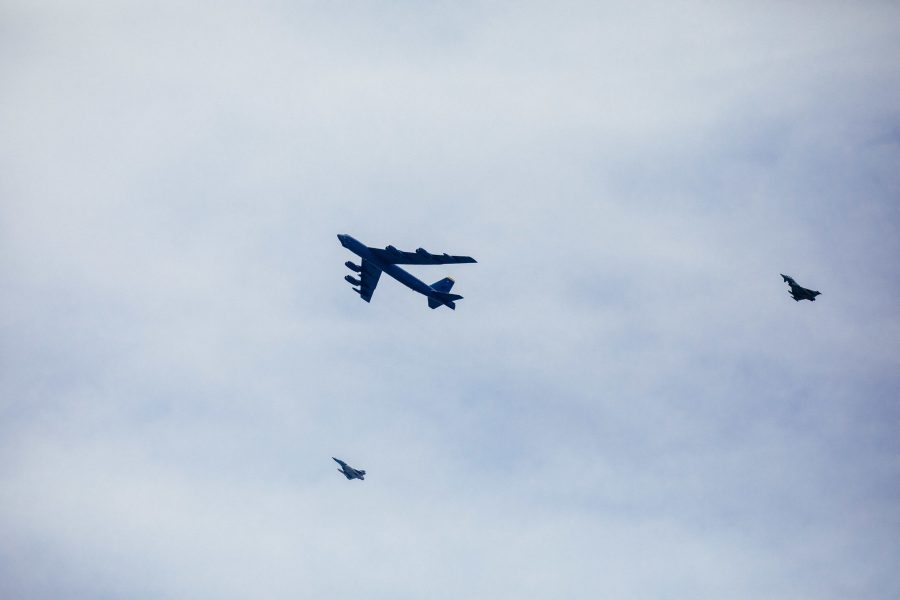 The Air Force sent groups of B-52s to the Pacific and Europe as bomber task force deployments within two days this week, prompting Russia to intercept one.

On June 15, two B-52Hs from the 5th Bomb Wing at Minot Air Force Base, N.D., flew a long-distance strategic Bomber Task Force mission through Europe and the Baltics, where they participated in the NATO-led Baltic Operations exercise.

The bombers, supported by a KC-135 from the 100th Air Refueling Wing at RAF Mildenhall, England, integrated with United Kingdom Royal Air Force Typhoons and French Mirage 2000s that are conducting the NATO Baltic Air Policing mission. The Stratofortresses also flew over Tallinn, Estonia; Riga, Latvia; and Vaindloo Island, Estonia, according to a U.S. Air Forces in Europe release.

The B-52s then linked up with U.S. Sixth Fleet ships deployed to the region for BALTOPS, flying over the USS Mount Whitney and NATO ships in the Baltic Sea.

“Long-range strategic bomber missions to the Baltic region are a visible demonstration of our capability to extend deterrence globally,” USAFE boss Gen. Jeffrey Harrigian said in the release. “Our participation in BALTOPS also provides an opportunity for us to strengthen relationships with our NATO allies and partners while operating in the air and sea domains.”

The Russian Defense Ministry on June 15 published a video purportedly showing Su-27 fighter jets intercepting a B-52 in international airspace over the Baltic Sea. The video also shows the jets intercepting a German P-3 Orion and a United Kingdom Royal Air Force Sentinel.

The deployments are the latest in the Air Force’s dynamic force employment model of sending bombers abroad, following the end of the service’s Continuous Bomber Presence in the Pacific.

Instead of long-term deployments, the service is currently focusing on sending small groups of bombers on short-notice flights across the globe to be more unpredictable.

In addition to the regular bomber presence in Guam, before the new coronavirus pandemic the service also staged bombers out of RAF Fairford in the United Kingdom. Harrigian told Air Force Magazine in a recent interview the command is working through when it can resume staging bombers in Europe, “But at this point we’re getting great effectiveness out of what we’re doing with the bomber task forces operating out of CONUS.”

Col. Kurt Wendt, commander of the 501st Combat Support Wing, which includes oversight of Fairford, said he expects to see a mix of CONUS-to-CONUS rotations, such as this, and more traditional European bomber task force deployments.

“Over the last couple of years, we hosted all types of bombers—B-1, B-2, and B-52—and at the same time, there were still CONUS-to-CONUS bomber missions flown to the European theater and elsewhere,” Wendt told Air Force Magazine recently. “So I think the future will look a lot more like that.”

For years, the once sleepy base was kept in warm status and only opened up periodically to host bomber rotations, but Fairford is now a 24/7 capable base ready to support bomber and ISR rotations, he said. Because of this, the base has significantly grown its manning from about 10 people to roughly 450, including a mix of U.S. military as well as U.S. and U.K. civilians. And though support operations at Fairford are still pretty bare bones compared to other European bases, it has reopened lodging facilities and now has a dining facility that serves three meals a day, he added.