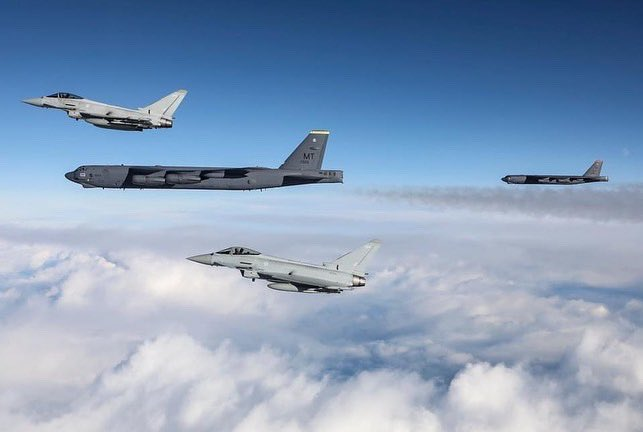 Four B-52s from Minot Air Force Base, N.D., deployed to RAF Fairford, U.K., on Feb. 10 for a notional three-week stay, during which they will exercise with NATO allies and partner nations.

En route to Fairford, the bombers, from the 5th Bomb Wing at Minot, were intercepted by British Typhoon fighters and Portuguese F-16s exercising under the Icelandic Air Policing mission, according to a U.S. Air Forces in Europe release. Afterward they conducted a bilateral Joint Tactical Air Controller close air support exercise with British ground forces.

“The mission focused on enhancing readiness and interoperability for the controllers responsible for coordinating airstrikes to support ground forces,” USAFE said.

A U.S. Strategic Command spokesperson said the bomber task force was “long planned” but not previously announced. Such deployments typically last about three weeks, she said, but “could move to the right or left” depending on the security situation. Due to operational security, she could not discuss planned training engagements with NATO allies or other partners during the BTF.

Neither USAFE nor STRATCOM linked the bomber deployment to the unfolding security situation in Ukraine.

Air Force Global Strike Command confirmed that the bombers arrived in the U.K. but could not say how many support personnel deployed with the B-52s. Such deployments can involve as many as 200 people.

USAFE-AFAFRICA commander Gen. Jeffrey L. Harrigian said that “with an ever-changing global security environment, it’s critical that our efforts with our allies and partners are unified.” Consistent collaboration and integration “is how we strengthen our collective airpower.”

A bomber task force of B-1Bs from Dyess Air Force Base, Texas, deployed to Fairford for 45 days in October 2021, during which the aircraft conducted operations in the vicinity of the Black Sea and Baltic Sea, among other locations, practicing agile combat employment, Harrigian said at the time. The Lancers also practiced cooperative missions with F-35s from Norway.

The last B-52 bomber task for to deploy to Europe was from the 2nd Bomb Wing at Barksdale Air Force Base, La., in May and June 2021. During that deployment, the bombers operating the European, Indo-Pacific, and Middle East theaters.