Skip to content
A B-1B Lancer assigned to the 9th Expeditionary Bomb Squadron lands at RAF Fairford, England, Oct. 6, 2021. The B-1 is a multirole, strategic bomber and carries the largest payload of both guided and unguided conventional weapons in the U.S. Air Force’s inventory. U.S. Air Force photo by Senior Airman Colin Hollowell.
Expand Photo 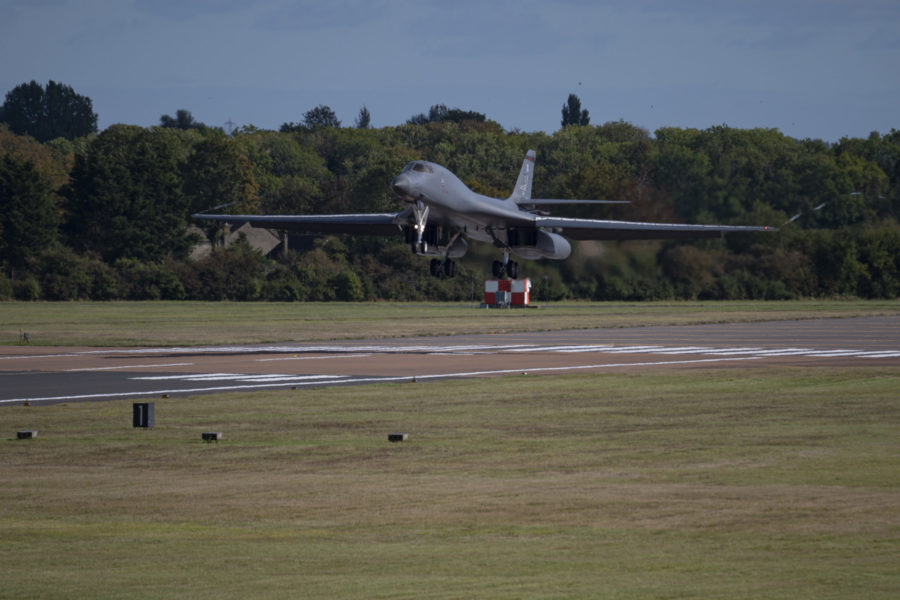 The first two of four B-1B Lancer bombers and some 200 support personnel from the 9th Expeditionary Bomb Squadron of Dyess Air Force Base, Texas, had arrived at RAF Fairford, England, as of Oct. 6 to begin a series of U.S. European Command and U.S. Strategic Command exercises with numerous NATO allies and partners across Europe.

“NATO nations … develop their skills and our skills to integrate and use these weapon systems to their maximum capacity,” de La Fé explained in a phone interview from USAFE-AFAFRICA headquarters at Ramstein Air Base, Germany.

Russia has increasingly made the Arctic a more contested region and strengthened its anti-access, area-denial capabilities in the Russian exclave of Kaliningrad, in the Baltics, and occupied Crimea, on the Black Sea, posing an increased threat to NATO’s eastern flank.

In the past year, de La Fé said regional partners have figured into American bomber exercises.

“That is to look at how we can employ our weapon systems that we don’t have in this theater, that we only host during rotations, and how we can employ them the most effectively with partners in these regions,” he said, while declining to name specific countries involved until the exercises are complete.

As a multirole strategic bomber, the B-1 has the capability of integrating with fighter jets in a different way because it flies faster and farther. It also holds guided and unguided payloads of conventional weapons, providing an array of ways it can integrate with partner capabilities.

During the deployment, the bombers will use ranges and participate in simulated events anywhere from the northern Arctic to the Horn of Africa.

The U.S. missions will also practice agile combat employment, or reducing reliance on large traditional bases and shifting to use of dispersed forward operating locations.

“A lot of our allies and partners across the theater want to engage with the B-1 bombers to ensure that they are capable of countering any adversarial threat within the region,” de La Fé  said. “We’re focusing on a lot of those agile combat employment concepts that we’ve been building, and we’re looking at executing them throughout this mission.”