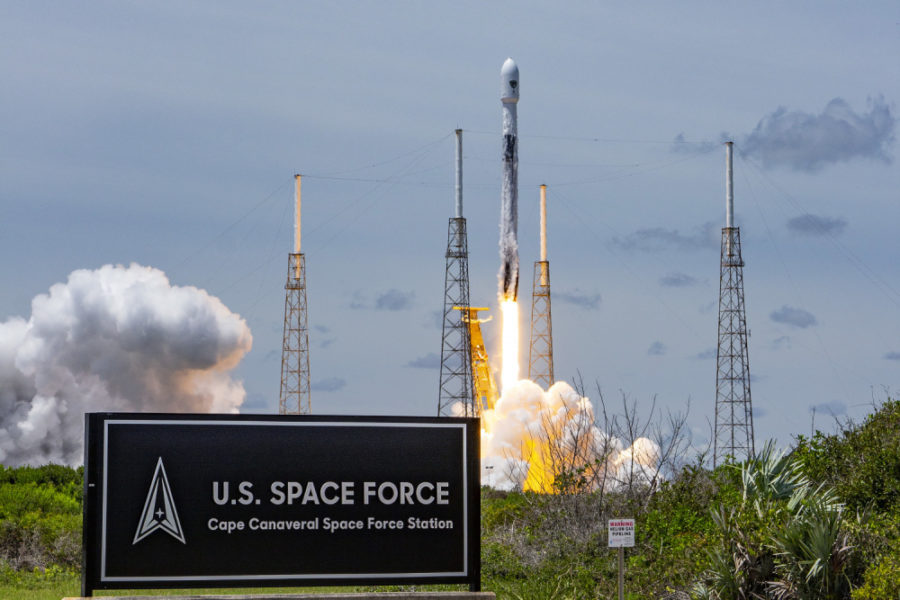 CAPE CANAVERAL SPACE FORCE STATION, Fla.—Air Force and Space Force personnel and systems have stood at the ready to remotely destroy a rocket if it were to go off course from the Eastern Range and endanger the public.

Now as launch companies adopt autonomous flight safety systems, Space Launch Delta 45 is saving on mission control chairs and looping out about a dozen facilities across the base per launch.

Streamlining the launches is letting the Space Force do more of them.

The delta’s leadership views the autonomous flight safety systems, or AFSS—which end an awry rocket’s flight automatically— as “the fundamental enabler” of the service’s “Range of the Future” vision.

“We’ve already seen the tremendous benefits of that with SpaceX. The numbers are dramatic,” the delta’s commander, Gen. Stephen G. Purdy Jr., told Air Force Magazine during a recent visit to Patrick Space Force Base, some 15 miles south of Cape Canaveral on the Atlantic.

Purdy estimated that a command-destruct mission involves some 16 range systems that must be used or staffed. That number drops to about five if the launch vehicle has an autonomous flight safety system to automatically blow it up, with onboard ordnance, or otherwise terminate the flight.

“This will be significant in processing our packed launch manifest,” a command spokesperson said. “We look to launch more missions to orbit in 2022 than in any previous year in the history of launch from the Cape.”

Purdy said that’s a welcome change from the mentality of years past.

“Many years ago, we were the range of the ‘No’ from a safety perspective and a scheduling perspective. If it was difficult, if it was painful, the answer was kind of ‘no’ first and then ‘no’ second,” said Purdy, a trained engineer and acquisitions professional. “You could do that when you only launched four or five rockets a year, right? If you’re launching a bunch more, you’ve got to figure out better ways to do things.”

SpaceX and Blue Origin already have the autonomous systems on their rockets, while legacy provider United Launch Alliance does not, but Space Force expects ULA’s new Vulcan Centaur rocket to have the feature.

Part of realizing Raymond’s vision is to get rid of unnecessary equipment and bureaucracy in order to run America’s space ranges more like commercial airports.

“That is probably the fundamental enabler of the big Range of the Future vision,” said Shoemaker, speaking from his office suite, which is still decorated with an open-mouthed shark logo carpet emblazoned with the motto, “We are ‘Go’ for launch,” representing the delta’s 45th Space Wing predecessor.

Reconfiguring the command-destruct range for every launch “is one of the key pacing items today,” Shoemaker said. Without the requirement, the delta can conduct launches more often.

“They sit on a console and actually [are] the man in the loop when the rocket goes the wrong way—they would actually turn a key and destroy the rocket,” he said. “We can turn range faster by not having all those extra pieces and parts. And that’s something Gen. Raymond has mandated for all of us to do.”

Once all the launch providers have autonomous flight safety systems, Space Systems Command estimates that 13 personnel will be freed up along with divestment in associated equipment.

For now, maintaining that equipment is a challenge in beachy conditions, including salt water, winds, sunshine, and even hurricanes.

“This is the Space Coast. We are in Florida. There’s a lot of water just over there,” Youngson explained.

“That water has salt, and the salt just starts eating away everything we have. As soon as you paint it, it’s going to start rusting tomorrow. And so that’s a lot of upkeep,” he said, noting that sometimes radars will be found inoperable.

Then there are the critters.

“There’s stuff that’s going to start breaking. There are animals here that like to dig, and so they’ll start chewing through wires,” he said. “You name it—there are things that are happening here.”

The best way to fix the problem, Youngson said, is less infrastructure. And that is achieved by autonomous flight termination.

“A lot of systems on the range we’re just not going to need anymore,” Purdy said. “We’re going to … squeeze out a lot of the older tech.”