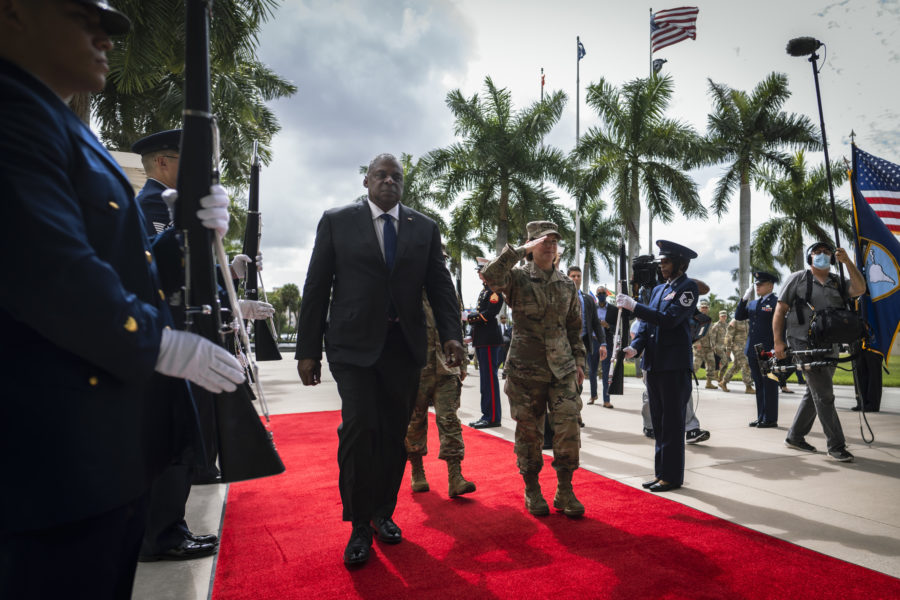 Austin Heads to SOUTHCOM, Brazil to Push US Priorities in a Neglected Region

China has made inroads in Latin America in recent years, and Russia has disrupted the information space against America and democracy—and both U.S. competitors provide military assistance to Venezuela.

Countering the two countries’ objectives in America’s “neighborhood” are among the challenges Defense Secretary Lloyd J. Austin III will face on his first trip to the region after nearly a dozen combined visits to Europe and the Indo-Pacific.

“We tend to look east and west a lot and not so much south, and I call it south blindness,” commander of U.S. Southern Command Army Gen. Laura J. Richardson said July 20 at the Aspen Security Form. “There are adversaries that are taking advantage of this region every single day, right in our neighborhood.”

Austin was scheduled to meet with Richardson on July 25 before flying to Brazil for the three-day biennial Conference of Defense Ministers of the Americas (CDMA) in the capital, Brasilia, according to a Defense Department news release.

The conference agenda includes discussions on cybersecurity; humanitarian assistance and disaster relief; the role of women, peace, and security; and migration. Austin will address integrated deterrence, according to the release, and encourage the 34 participating countries to work together to deter aggression and threats to regional democracy.

The goal of the “malign actors,” according to the paper, is “to gain diplomatic, informational, military, and economic advantages and favorable balances of power” through “increasingly coercive and aggressive strategies favoring their asymmetric interests.”

Integrated deterrence is the means to deter China in the region, Richardson said.

For SOUTHCOM, integrated deterrence has meant leveraging the convening power of the U.S. government to attract business executives to a partner nation; or academic partnerships that benefit nations.

Austin will have a tough case to make in a region with economies hit hard by the coronavirus and the impacts of natural disasters in recent years. All the while, Richardson said at the Aspen forum, China has made investments in infrastructure, including deepwater ports, telecommunications, and spaceports with projects in 25 countries in the hemisphere. In Brazil, the biggest economy in the region, China is the top trade partner.

Venezuela is not among the CDMA attendees, but the regional migration of six million Venezuelans caused by its economic crisis will be a topic of discussion.

“Venezuela has caused a lot of instability in the region. It’s caused a lot of migration,” Richardson said, declining to discuss security threats posed by the socialist country. In 2018, Russia sent two TU-160 supersonic bombers on a mission to the country. Venezuela is also the top regional buyer of Chinese arms, according to an April 2022 report by the Council on Foreign Relations.

Austin will make a case for upholding democracy and strengthening integrated deterrence, a whole-of-government collaboration to achieve security goals, according to the DOD news release.

“Countries must work together to bring to bear a collective deterrent ability against mutual threats,” the U.S. discussion paper reads. “This especially means sharing information and helping each other to strengthen our capabilities.”

The Pentagon said in the release that Austin will hold a number of bilateral meetings on the sidelines of the event. DOD and SOUTHCOM did not respond to interview requests by Air Force Magazine for this story.

Austin’s argument will lean on the oft-cited network of U.S. partners and allies around the globe to encourage the countries of the Western Hemisphere to further integrate and strengthen “the region’s long-standing consensus in favor of democracy.”

“The PRC is playing chess while Russia is playing checkers,” she said at Aspen. “They have short-term goals in terms of undermining our democracy, causing destabilization through the information environment [that is] off the charts in this region, over 30 million followers in social media.”

“We are not in competition in that space. We are in conflict in the information environment,” she said.

In a November 2021 interview with Air Force Magazine, SOUTHCOM’s military deputy Air Force Lt. Gen. Andrew A. Croft said SOUTHCOM helps nations in areas such as values, human rights, rule of law, democracy, and migrant patterns; and delivers humanitarian assistance and disaster relief to nations hit hard by earthquakes and storms—”all those things we care about that the Chinese and the Russians will not. They’re going to do things that just purely benefit them,” Croft said. “It’s very transactional if you’re China and Russia.”