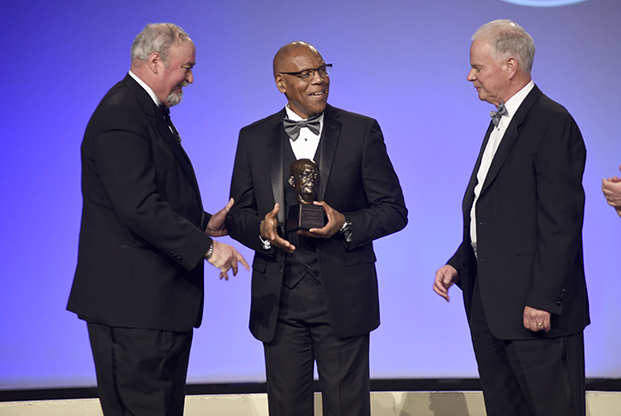 Criteria considered when choosing an award recipient include support of US armed services and security-related agencies with strategic impact; exceptional contributions to a strong US national security and industrial base; active support of the US defense industrial base; and leadership in defining and addressing US industrial base and national security issues, among other criteria. Former award recipients include Secretary of Defense Dick Cheney, Secretary of Defense William Perry, Joint Chiefs of Staff Chairman Gen. John Vessey, and House Armed Services Committee Chairman Rep. Ike Skelton of Missouri.

Spencer said he was surprised and overwhelmed by the award.

“Understanding the level and contributions of others that have received this award, I don’t know how I got into that company,” he said. “I am very honored.”

Spencer, who retired as a four-star Air Force general serving as USAF’s Vice Chief of Staff in 2015, began his military career as an enlisted airman in 1971. He attended Officer Training School and was commissioned as a second lieutenant in 1980. In 1993, he was selected to attend ICAF, where he was a distinguished graduate and received a master of science degree in resource strategy.

USAF has also honored Spencer. In June 2015, the Air Force created a new award to recognize innovation and efficiency within the service and named it for Spencer, who created, as Vice Chief of Staff, the “Make Every Dollar Count” and “Airmen Powered by Innovation” programs to encourage airmen—particularly the enlisted corps—to bring new ideas into Air Force operations.

“There’s a ‘frozen middle’ in large organizations that—deliberately or not—tends to stifle innovation,” Spencer said. “Young airmen are full of good ideas, but sometimes can’t find a way to get them heard by the people at the top who can apply the ideas and make them happen. The ‘frozen middle’ is hard to break through, and we should reward those with the perseverance and determination to fight through those layers … to get their innovative ideas heard.”

Scheduled to leave his post as President of AFA in a few months, Spencer has no intention of retiring. He is certain, he said, that he will continue the charity work he already performs—and perhaps expand it—and doesn’t rule out working in the private sector or even for another nonprofit organization. His focus has long been nurturing and encouraging innovation and thinking “outside the box,” particularly among young people and those just beginning their careers, and he’d like to continue his efforts in that direction.

“People don’t like change,” he said. “They say they do, but really, they don’t. But it takes a diverse group of thinkers—diversity in gender, race, education, social experience—to come up with different ideas … ways of doing things. Not every ‘different’ idea is better, but we all need to challenge the status quo to ensure we don’t get trapped inside our own sphere of knowledge.”