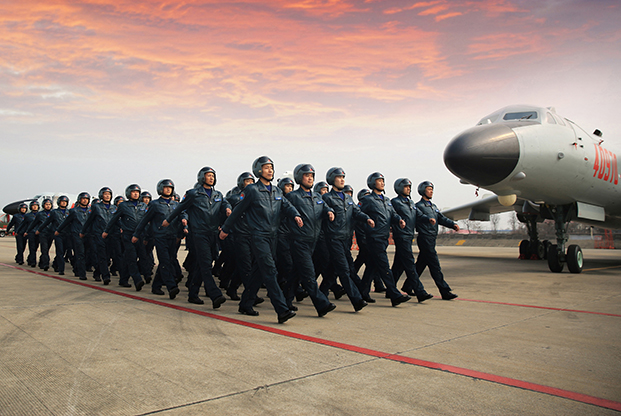 The People’s Liberation Army Air Force is rapidly modernizing and growing its combat forces to counter the US Air Force. Here, airmen of an H-6K bomber unit march in formation before the start of a long-range training exercise. Photo: Yang Ruikang, Ministry of National Defense

Of the three world superpowers, two have operational squadrons of stealth fighters. One is the US. The other is not Russia, but China.

In fact, the National Defense Strategy, released in February, suggests that China’s conventional power is growing more rapidly than that of Russia. Flush with cash, China has the resources to maintain a brisk pace of technology advancement for all its military services, but especially the People’s Liberation Army Air Force (PLAAF). Top USAF leaders have dropped the “near” from the sobriquet “near-peer adversary” when referring to China.

The PLAAF has made a “great leap forward” in the last 20 years, continuing to shift from a fleet of mostly obsolescent license-built second and third generation Soviet combat aircraft to a mostly modern, fourth generation force featuring counterparts to almost every type of US Air Force system. In fact, if imitation is the sincerest form of flattery, USAF should feel extremely flattered, indeed: China has fielded clones of USAF aircraft ranging from the Global Hawk and Reaper remotely piloted drones to the C-17 transport and F-35 fighter, and air-to-air missiles that look remarkably like the US AMRAAM.

_Read this story in our digital issue:

Chinese defense white papers in recent years tout that, even as the nation seeks to asymmetrically counter US strengths, it will build up its conventional airpower, fundamentally copying the US Air Force. It now fields up-to-date airborne warning and control aircraft, aerial tankers, bombers, fighters, electronic warfare, and intelligence, surveillance, and reconnaissance assets all largely organized to mirror USAF. (Where the counterparts differ is that the PLAAF has responsibility for the helicopters that transport and tactically support the People’s Liberation Army ground forces, as well as ground-based air defenses.)

The J-20 fighter—around which PLAAF’s first stealth squadron, at Dingxin, is organized—has no real USAF analog. The J-20 has features that echo the F-22 and F-35 (its chin-mounted electro-optical system is externally identical to that on the F-35), and US intelligence has no doubt it is based on stolen US technology. However, USAF and industry watchers deduce that it is not necessarily built for agility, but for speed and stealth in the forward quarter; capabilities that would make it useful for surprise attacks on land units or, more likely, critical airborne assets such as tankers and intelligence, surveillance, and reconnaissance platforms. In some circles, it’s described as the “AWACS killer.” 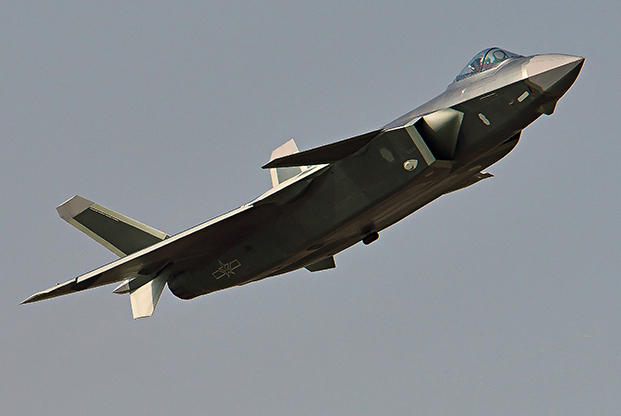 A PLAAF J-20 stealth fighter. The fifth generation Chinese jet looks strikingly similar to USAF’s F-22 Raptor but might not be as agile. Photo: Sunson Guo

The J-20 is also not the only stealth aircraft China is working on. The J-31 fighter in development is a ringer for the American F-35 and differs mainly by having two smaller engines instead of one big one. The J-31 seems to be making slower progress than the J-20, and there are rumors it may be intended as an export aircraft.

Though based largely on US technology, both the J-20 and J-31 are indigenous designs, China having largely broken off deals with Russia to collaborate on fifth generation platforms. Engines, however, continue to be China’s weakness, and in this category it is still forced to rely on Russian designs. China’s government has made improving its engine capability a priority, and the J-20 may soon trade its Russian-designed AL-31FN engines for the domestically built WS-10B.

As its military built up a head of steam in the late 1990s and early 2000s, China at first imported, then license-built, variants of Russia’ top fighter, the Su-27 Flanker, and later versions in the Su-30 and Su-35. Known as the J-11 in China, the basic Flanker has been modified and improved, and China now also builds the J-16 variant domestically, including versions optimized for ground attack and electronic warfare. The J-15—a carrier-capable version that operates off the Chinese carrier Liaoning—is adapted from the Russian SU-33, another Flanker variant. It has folding wings and canards and uses a ski-jump to get airborne quickly. China airpower observers have said the J-15 seems to have limited range and weaponry compared to western carrier aircraft counterparts. It’s operated by the People’s Liberation Army Navy. All told, China has about 300 Flanker-derived fighters. 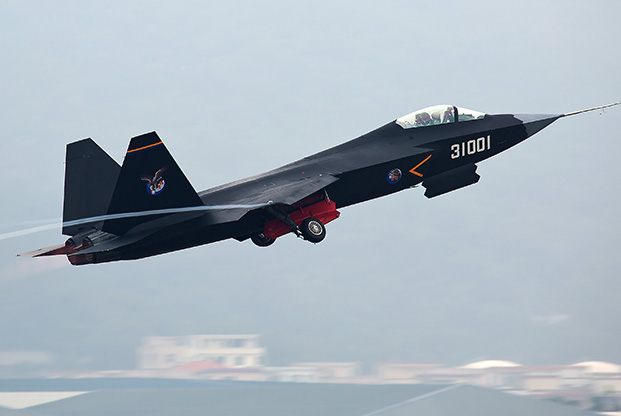 Another Chinese stealth fighter, the new J-31, is a ringer for USAF’s F-35 but features two smaller engines instead of a single big one. Most experts believe the J-31 and J-20 were developed with the aid of stolen US technology. Photo: Danny Yu

The Flanker variants are generally considered on a par with the US F-15.

The J-10 is one of the PLAAF’s proudest achievements. Designed with Israel’s assistance and based somewhat on that country’s canceled Lavi fighter, the J-10 is China’s answer to the F-16.

The PLAAF is already fielding the third iteration of the J-10, each with more sensor capabilities, processing power and improved aerodynamic performance, as evidenced externally by its evolving chin intake. The J-10 is intended to be the “backbone” of the PLAAF combat forces; a multirole fighter able to swing between dogfighting and ground attack.

US intelligence pegs the J-10 as roughly comparable to the F-16 Block 42 in capability, and the latest versions, equipped with active electronically scanned array radars, may give it an edge over the F-16 Block 50-52. China has more than 250 J-10s in service. 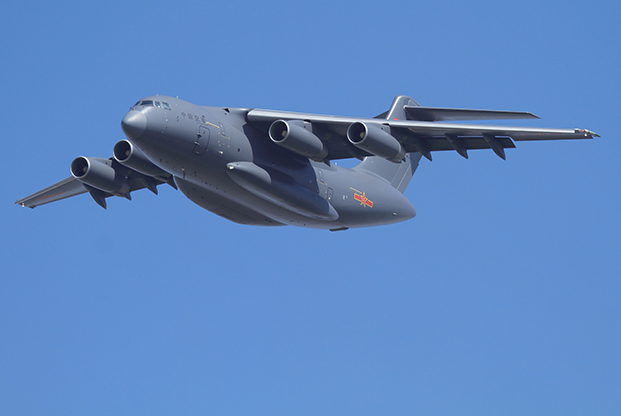 The J-10 is rapidly supplanting older Chinese fighters based on or derived from the MiG-21. In the attack role, the J-10 complements the JH-7 and JH-8, which are optimized for precision ground attack. Older types like the J-7, based on the Russian MiG-21, have been modernized but are being phased out.

China’s bomber force comprises about 120 H-6 aircraft, which are of roughly the same vintage as USAF’s B-52s and are based on the Russian Tu-16. According to a 2017 Pentagon report on Chinese military capabilities, the H-6 has been adapted to launch cruise missiles, extending its power projection capabilities well beyond the “first island chain” of Chinese strategy.

The Pentagon has said China could unveil a new, low-observable bomber in the next few years, called the H-20, but reports differ as to whether this will be a “flying wing” design like the B-2, or a scaled-up version of the J-20. 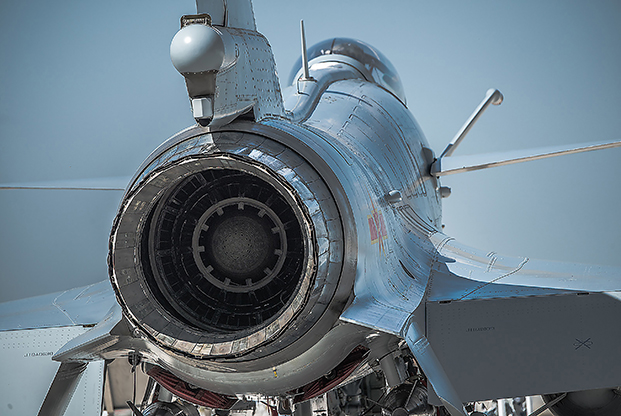 A J-10 multirole fighter sits on the runway in 2017. The J-10 is intended for air superiority missions or surface attack, carrying an array of air-to-air missiles or bombs and rocket pods. Photo: Sunson Guo

China’s newest airlifter is the Y-20—still in flight test—which should become operational in the next few years. Strongly resembling the C-17, the Y-20’s development is said to have been accelerated by the C-17’s ability to deliver aid to Chinese provinces after the massive 2008 earthquake, when China’s own IL-76s could not use the short and damaged airfields available, thus causing some embarrassment for the PLAAF.

Airborne warning and control assets include the KJ-200—similar to the Swedish “Erieye”—and the KJ-2000, which, with its rotating saucer-shaped radome, resembles the US AWACS. The KJ-2000, hosted on an Il-76 transport, can track more than 100 targets simultaneously.

China also seems likely to press ahead with building more aerial refueling IL-76-based tankers to extend the range of its land- and sea-based aircraft alike.

Innovation and improvement of China’s air force is likely to continue unabated, as the nation seeks to become the hegemon in the South Asia region and an equal challenger to the US in the Pacific. It has become, as the National Defense Strategy states, the “pacing threat” for the US military.