The Promise and Perils of Foreign Bases

In crises past, the Air Force usually has managed to gain adequate access to overseas bases. This has sometimes entailed building relationships with nations that are decidedly nondemocratic. Often, the access is—for lack of a more delicate word—bought.

Some say the US should avoid dealing with dictators or other unsavory regimes. Sometimes there is no alternative. Even so, there is no doubt that danger comes attached to such deals. Recent events show the risk in such arrangements-of-convenience. Every several years, it seems, USAF’s Central Asian basing scheme gets a shake-up. 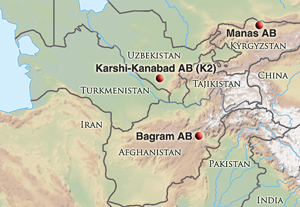 In 2001, the US needed bases near Afghanistan—at the time perhaps the least accessible corner of the world. Karshi-Khanabad (K2) Air Base in Uzbekistan and Manas AB, Kyrgyzstan, soon became vital logistical hubs for Operation Enduring Freedom.

In 2005, Uzbekistan kicked out the Air Force after the US criticized the hard-line Uzbek government for a deadly attack on protestors in the town of Andijon.

Sensing a golden opportunity, the government of Kyrgyzstan responded by promptly renegotiating its deal with the US, achieving a massive increase in the “aid package” the US paid for use of Manas.

This year, the same Kyrgyz government jumped in a different direction. It chose to evict the US military from Manas, but only after securing a larger financial aid package from Russia. The Air Force was ordered to vacate the premises by August.

However, the Pentagon has already secured access to new rail routes into Afghanistan. They pass through … Uzbekistan.

What lessons can we draw from this

A significant shift in any one of these factors can place Air Force access at risk.

Economic integration is required to build a pro-base constituency. In the case of Manas, this never happened. The base arrangement was widely criticized in Kyrgyzstan for its failure to provide significant economic benefit.

The fall of a government into instability can be another major warning sign. Coups, revolutions, and even democratization trigger problems; foreign bases often are seen as illegitimate legacies of a discredited regime.

This has caused problems for the Air Force in locations as diverse as the Philippines (where the US was tight with dictator Ferdinand Marcos) and Spain (where Francisco Franco provided the US several bases). In both cases, popular revulsion later led to the closing of key facilities.

The Defense Department has for the past eight years sought to diversify its basing options, in an attempt to move beyond a base structure created by World War II and the Cold War to better reflect the needs of the Global War on Terror. This requires temporary “lily pad” bases in Eastern Europe and Africa, and semipermanent facilities in South and Central Asia.

Washington actually has been playing this kind of hand for some 30 years. In the wake of the fall of the shah of Iran in early 1979, the Pentagon found itself bereft of bases in the Persian Gulf region. It quickly negotiated agreements giving US forces temporary access to facilities in Oman, Egypt, Saudi Arabia, and Qatar. These were austere facilities, located well away from population centers, and used only rarely.

The US often has no choice but to pay for basing rights, but this sometimes ends in financial brinkmanship that benefits no one.

The eruption of Mount Pinatubo in 1991 made it easy for the Air Force to walk away from Clark Air Base after Manila sought an increase in rent payments to $1.2 billion per year.

Turkey’s decision in 2003 to refuse US Army access to open a northern front in the Iraq war arose from a major miscalculation. Seeking more than $6 billion in cash, “the Turkish government and its military thought that Washington had little choice but to give Ankara whatever it asked for,” wrote Kent E. Calder in his 2007 book, Embattled Garrisons.

When K2 closed down, neighboring Kyrgyzstan promptly sought a 100-fold increase in rent at Manas—what Calder refers to as “bazaar politics.”

Basing decisions are not strictly monetary. Some commentators compare the current struggle for influence and access to the so-called “Great Game,” staged by the British empire and Imperial Russia in 19th century Central Asia.

As Manas and K2 have shown, “rent a base” facilities are useful in the short term, but of questionable long-term reliability. Planners should keep the need for flexibility in mind as they seek out new bases in tumultuous regions.