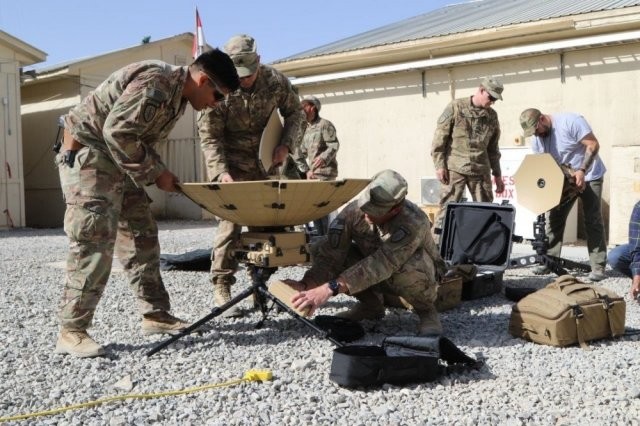 Why the Army Clings to Its Space Troops: ‘Translating Geek to Grunt’

FORT CARSON, Colo.—On Jan. 8, 2020, Iran launched theater ballistic missiles at Al Asad Air Base where American troops were stationed in Iraq. The retaliatory strike was in revenge for the killing of Iranian Revolutionary Guard Quds Force leader Qassem Soleimani days earlier. Hundreds of U.S. Soldiers could have been killed by the barrage of 14 rockets.

The 20th Theater Missile Warning Company, part of the Army’s 1st Space Brigade, was in Qatar receiving direct downlink data from a Space Force constellation at the time of the launch.

“We had a specialist that was an E-4, sitting on crew chief that night” in U.S. Central Command, Col. Donald K. Brooks, 1st Space Brigade commander, told Air Force Magazine during a visit to Fort Carson.

The specialist alerted coalition commands at CENTCOM and the 1st Space Brigade detachment commander at Al Asad, who ordered his 30-person element into bunkers.

“Well before those theater ballistic missiles were warhead events on Al Asad base, we had Soldiers sitting in bunkers,” the commander said. “That’s where we work at the tactical, operational level, [employing] strategic capabilities that the Space Force” provides.

The Army says it needs that tactical and operational capability for its forward Soldiers to maneuver in theater and to conduct defensive and offensive operations in and through space.

The Iran incident proved that Army Space is capable of quickly integrating with the Space Force to protect American service members and interests globally. “Army Space” is how the Army colloquially refers to its space functions such as missile defense, space control, and space support.

“As Space and Missile Defense Command’s operational arm, we really do bring space to the warfighter,” Brooks said.

The Army will retain its FA-40 specialists and its GPS maneuvering and space missile defense capabilities, the Department of Defense has determined, rather than fold them into the Space Force.

“Those things that are strategic in nature, that operate in, through the actual space domain itself, I think that’s where it lends credence to go over to the Space Force,” said Brooks, sitting at a table with the 1st Space Brigade’s emblem—an Eagle perched, with wings spread, atop a globe—draped behind him. “If it has roles and responsibilities at the tactical and operational level, I think it could be retained and should be retained.”

The Army’s Case for Space

The 1st Space Brigade is dispersed across 16 locations in 10 countries, including 160 Soldiers in CENTCOM, 140 in U.S. Indo-Pacific Command, and 150 in U.S. European Command. Under the brigade are four missile warning companies and five missile defense batteries, all spread among the INDOPACOM, CENTCOM, and EUCOM theaters, plus several units based at Fort Carson.

In the Indo-Pacific, for example, the Army uses space for long-range fires, communication, and missile defense. To maneuver on the ground, the Army uses precision navigation and timing, and imagery. In space control, it has offensive and defensive space capabilities to jam adversary communications and prevent jamming of its own communications.

“Maintaining Army Space is critical to how we fight those large-scale combat operations in the future,” Brooks said.

“We aim to achieve close space support the same way we do close air support for those ground maneuver formations,” he said.

Removing space assets or capabilities from the Army and giving them to the Space Force, Brooks argued, would harm the Army’s ability to defend itself and attack efficiently.

“I can have that [capability] in a direct downlink, forward postured, forward deployed in an austere environment or non-permissive environment, sitting right in the hip pocket of a ground force commander that is trying to work timing and tempo to maintain the initiative against an adversary in a close fight,” he said. “That’s where close space support is incredibly critical to that fight.”

Brooks made the case that only Army officers and noncommissioned officers in their original branch will understand warfighting at the Army tactical and operational level well enough to bring space to the warfighting functions. He said having those personnel on scene prevents the vulnerabilities inherent in long-distance communications.

“That tyranny of distance presents a huge vulnerability,” he said. Any delay could “prevent a ground force commander from employing fires or effects at the time and place of his or her choosing, and essentially, losing the momentum in a fight.”

The Army’s FA-40 space operations officer became a functional specialty in 1999 to help provide space capabilities to the Army at the operational and tactical level. Before he became an FA-40, Brooks was an artillery officer and infantry company commander. Other FA-40s have experience in military intelligence, air defense artillery, infantry, and chemicals.

“That’s really what the Army Space officers bring to this enterprise, that foundational knowledge at the tactical and operational level,” he said.

Brooks recalled his time at U.S. Special Operations Command, when a career SOF infantry Soldier offered him a compliment that stuck with him throughout his career in Army Space.

“He said, ‘You were the best person I’ve ever seen to be able to translate geek to grunt, and grunt back to geek,’” recalled Brooks, who has a master’s degree in astrodynamics. “We might not refer to ourselves as space geeks or nerds, but we’re really good at translating.”

The Pull of Space Force

Army officers’ interest in becoming FA-40s has not wavered since the standup of the Space Force, Brooks said, nor has he significantly lost talent.

“There’s always concern that you lose talent, whether that’s to another service or to the civilian world,” Brooks said. “I have not seen something that makes me not sleep at night, as far as losing our Soldiers.”

Of his 1,500 Soldiers, including 90 FA-40s among his 195 officers, about 60 applied for transfer to the Space Force recently, but only five were selected to become Space Force Guardians.

Brooks said retaining FA-40s means showing Army Space warfighters how they can make an impact on operations at various warfighting commands. The rising space threats from China and Russia have even prompted more Soldiers to transfer to FA-40.

“The more and more we know about our adversary, it’s really the rallying cry for people to come to space,” Brooks said.

The Army will transfer some space-based units to the Space Force once the fiscal 2022 defense bills become law. Among the transferring units will be the 1st Space Brigade’s 53rd Signal Battalion as well as combined and regional satellite communications support centers across the continental United States, Hawaii, Japan, and Germany.

“I don’t think the Space Force has taken anything from us that we would need in that fight,” he said. “It’s very complementary.”

“The Army has space forces to enable their land maneuver mission,” he said in response to a question from Air Force Magazine. “It’s important for the Army to retain some space capabilities.“

“We don’t see duplication with what the Army is keeping,” Whiting said. “We think that’s an adjunct to their land maneuver mission set.”

Brooks couldn’t be more pleased. “Most people don’t truly understand that the Army does have space equities,” he said. “We want to focus on keeping space within the Army because it is super critical to what we do at that tactical and operational level. And when we lose that, I think that’s where it’s going to really hurt our formations, and it’s really going to hurt our ability to fight and win in future conflict.”