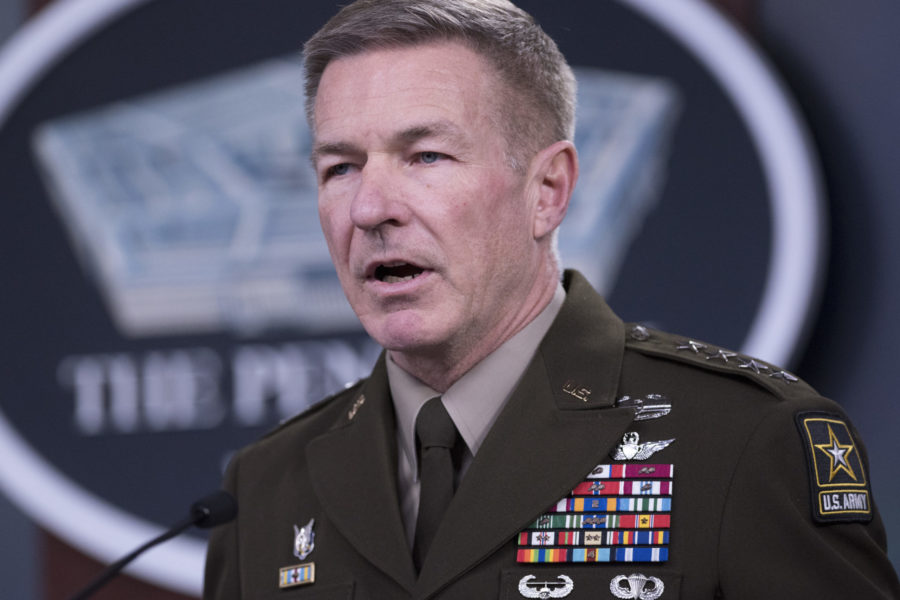 The Army’s new vision dubs it an “All-Domain” Army and envisions “expanding … into the maritime, air, space, and cyber domains” while seizing new roles in long-range strike and suppressing enemy air defense.

A new white paper released March 16 declares that, while part of the Joint force, the Army holds a pre-eminent role in combat by virtue of its size, and surmises that the other services should adopt its methodologies.

Titled, “Army Multi-Domain Transformation: Ready to Win in Competition and Conflict,” and released by Army Chief of Staff Gen. James C. McConville, the paper envisions a “bold transformation” of Army organizations, weapons, and strategy, to “provide the Joint Force with the range, speed, and convergence of cutting-edge technologies that will be needed to provide future decision dominance and overmatch required to win the next fight.”

The paper asserts a multi-domain Army “will set the conditions for the Joint Force to fight and win integrated campaigns necessary to defeat state actors.”

Speaking in a Brookings Institution webinar March 25, McConville expanded on the vision laid out in the paper. He said the Army has a “need to penetrate” enemy airspace, and must therefore have its own long-range precision fires, such as hypersonic missiles, to deter attack and respond when needed. In his vision, such missiles would make the Army the key instrument for negating “what some of our competitors have done with anti-access/area denial” by means of air and missile defenses.

The concept turns on its head the conventional air-land arrangement, where air power clears the way for ground maneuver; McConville said land-based hypersonic missiles could enable the Army to “certainly suppress air defense, which could open up a gap if we needed to put aerial maneuver into place.”

The talking points built on recent comments in which McConville claimed that Army’s Apache helicopters opened corridors for fixed-wing aircraft to attack Iraq at the outset of the 1991 Gulf war. His exaggeration ignored the Air Force stealth aircraft that had already penetrated Iraqi airspace and were destroying its command and control apparatus. McConville cited the same example at Brookings, describing the Apache mission as “illustrative” of what the Army has in mind for future long-range fires.

“Long Range Precision Fires is very important,” he said. “We feel we need to have that. … We’re going to have the … anti-ship capability, the capability to suppress air defense systems at very, very long range…the ability to do strategic counter-fire, the ability to do anti-access/area denial.”

Asked about the roles-and-missions implications of his concpet, McConville declined to answer. He promised a fuller doctrine document next year.

“We need speed in the future,” McConville said. This is “the big idea” for the Army. “We know we need range. … But it’s really about convergence and how we bring all these systems together to get decision dominance.”

McConville also asserted that the Army is the right entity to develop a Combined Joint All-Domain Command and Control system (CJADC2), not the Air Force, which pioneered the concept. The difference is that the Army is bigger, he said.

“We’ve had this discussion with the Air Force,” McConville said. “Bringing together thousands of airplanes that can talk to each other is a different task from what the Army has to do, with over a million systems on the ground that have to pass information.” The sheer scale of the Army challenge means that what “works fine” for thousands of airplanes “may not work fine” for that larger Army force. However, McConville acknowledged that his forces “may not need as much information.”

McConville’s goal is to transform the Army by 2035, with 2028 as a “waypoint” to re-assess and adjust. The paper lays out the “big six” Army modernization priorities:

The new vision paper insists that “winning the first battle or prevent a fait accompli in crisis will be necessary to prevent prolonged conflict and escalation.” It sees “ground forces [seizing the role to] decisively shape the first battle by leveraging positional and capability advantage.” The Army sees itself as operating and persisting “inside” enemy air defense zones, and creating “corridors for air, maritime and all-domain forces to exploit.” The Army will also establish “robust, resilient webs of communication, protection and sustainment that enable to the Joint Force to prosecute conflict.”

Using long-range fires from the ground, it says, the Army would be uniquely suited to “protect strategic deployments,” provide rapid availability of the Joint Force, facilitate deployments “from the contested homeland to the point of employment,” establish lines of communication, and maximize inter- and intra-theater transition capabilities.

The Army, he said, is “putting on a full-court press to duplicate long-range strike, air- and space-based intelligence, surveillance and reconnaissance, and command and control capabilities that already exist in the other services.”

Jointness, Deptula continued, requires “each of the services to dominate in their respective domains—not encroach into the domains of the other services.” Just because a service depends on another for its core competencies—long-range strike being an example—that doesn’t mean the others “should rush to replicate what already exists.”

If more long-range strike is required, Deptula said, “then the additional investment should be made in the service with the most competency in that function; in this case, the Air Force.” If surface-to-surface missiles “are deemed appropriate to enhance air-delivered strikes,” then that capability should be assigned to the Air Force, he argued.

“It would be much more cost-effective since the Air Force already has the command and control and ISR architecture to operate weapon systems across an entire theater of operations, as well as globally,” he said.

The new Army hypersonic missiles are, “unfortunately …. prohibitively expensive, non-reusable and require extensive deployment logistics support,” he asserted. “The bottom line is that our nation can ill afford to proceed with programs that replicate effective, proven weapon systems and C2ISR architectures, merely to bolster a single service’s ‘footprint’ in the battlespace.”

“The next few years will see hard choices in the defense budget,” Deptula said. “Finite dollars must be directed toward programs that optimize combat options and capability across all the services. Not just one.”