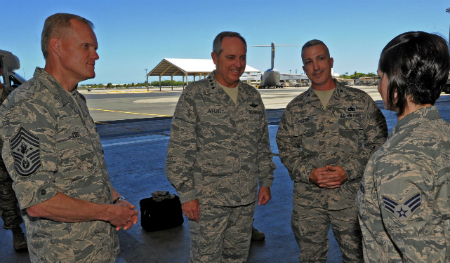 Chief of Staff Gen. Mark Welsh and CMSAF James Cody went around the Asia-Pacific region visiting airmen last month. There’s no getting around it, they repeated often: the institutional and operational Air Force will look much different than anyone had planned. “We’re going to get smaller, and we’re not going to get a whole lot more new stuff,” said Welsh bluntly to airmen and in private calls with wing leadership at stops in Japan and South Korea. The Air Force now faces some of the starkest force structure decisions in years, said Welsh. Whole fleets of airplanes—from mobility to intelligence, surveillance, and reconnaissance to the combat fleet—are on the table for the program objective memorandum now unfolding in the Air Staff. That’s where the real savings are, noted Welsh. He’s now forced to assume budget sequestration will not go away over its planned 10 years. This assumption is the impetus behind the “Air Force 2023” project that calls for reshaping the Air Force for the worst-case budget scenario. Click here to continue to the full report.