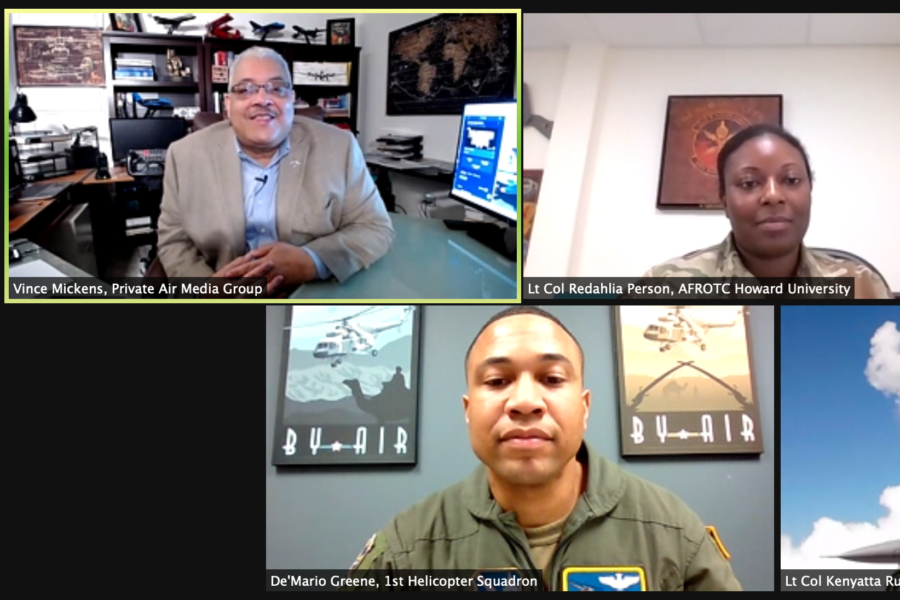 Airmen Aim to Promote Diversity in Aviation With Event at HBCU

An Air Force UH-1N helicopter will land near Cramton Auditorium on the campus of Howard University in Washington, D.C., on April 30, fulfilling one pilot’s dream and perhaps sparking a few more.

That’s the hope of 1st Lt. Dontae Bell, a pilot with the 1st Helicopter Squadron at Joint Base Andrews, Md. Bell, along with others, helped organize the “We Fly Too” event showcasing diversity in aviation that will be highlighted by the UH-1’s arrival and will include an appearance by Air Force Chief of Staff Gen. Charles Q. Brown Jr., the service’s first Black Chief.

Speaking during an April 26 webinar hosted by Private Air Media Group, Bell said he first got the idea as an undergraduate at Howard, and he never quite gave up on it.

“I wanted to land on Howard’s field. And in the process of doing that, I wanted to also figure out a way to get back to my alma mater and really tell folks about the magic of aviation, which is something I didn’t really discover until later in the game,” Bell said. “One thing led to another. I wanted to see if we could get the Chief of Staff of the Air Force involved, and, of course, being a lieutenant, I didn’t really imagine how much it would take to get someone at that level onto a campus and speaking to students.”

It is Bell’s hope that the event, which will include panels and displays for students in college, high school, and middle school at a historically Black institution, will inspire young people to pursue aviation. It’s a hope shared by Lt. Col. Redahlia Person, commander of the Air Force ROTC detachment at Howard, one of the largest HBCUs in the country.

“It’s about opportunities and spreading that wealth and starting at a young age,” said Person, a career maintenance officer. “I think, had I been exposed to it a little bit sooner, I would have no problem wanting to fly. So I did the next best thing, which is to be responsible for fixing them and giving the pilots the keys.”

The Air Force has continued to struggle with a lack of diversity in its aviation career fields—a recent Air Force Inspector General report found that the operations career field is the least diverse specialty code in terms of race, ethnicity, and gender, and the pilot speciality is the least diverse of them all. Roughly speaking, nine out of every 10 pilots in the military and in commercial industry are white, noted Lt. Col. Kenyatta Ruffin, an F-16 pilot.

The general lack of opportunities for minorities even affects those who do get a chance.

“Anyone who goes through UPT, undergraduate pilot training, will face their set of issues. But I found that the reason why it was so challenging for me is because it felt particularly isolating,” Bell said, noting that he tried to quit several times. “And I don’t say that to say anyone treated me super unfairly—maybe there were moments that were a little awkward—but … I was the only African American in my cohort, in my class. So out of 20 people, it was just me. … And I felt … a lot of cultural differences when we would hang out outside of the specific classroom areas. And honestly, in the pilot training world, that’s where a lot of learning would happen.”

It was a feeling shared by Tech. Sgt. De’Mario Greene, a flight chief with the 1st Helicopter Squadron, when he went through training for special missions aviation.

“It was, ‘Well, I’m learning something new,’ so I also have the intimidation of being the best at one of the most difficult Air Force jobs there is, and then I also have, ‘Oh, it’s just me here.’ And sometimes we can be in our own heads and we can allow that to conquer us,” Greene said. “But I think it’s important that you have good leadership and good mentorship at the top. I ran into a similar situation down in New Mexico, and I had a lieutenant colonel pull me into his office. … He motivated me to stay in aviation. And to this day, that was one of the best conversations that I’ve ever had in my life.”

Mentorship is crucial, all four Airmen agreed—and with “We Fly Too,” they hope to encourage and connect more prospective service members with those who can guide them.

“Mentorship is one of my passions, and we often overthink it and make it too difficult,” Ruffin said. “And I say it all the time—I said it to my Airmen: If you’ve been in the Air Force for more than one day, you have something to offer to the person behind you.”