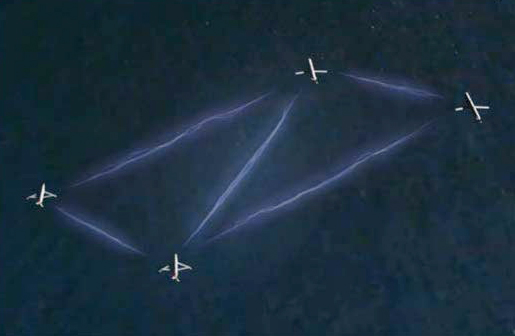 “Golden Horde” aims to connect munitions like Boeing’s Small Diameter Bomb I in a swarm that can work through a list of targets on its own, and that could redirect individual weapons as needed.

AFRL still plans to prove whether a group of bombs can collaborate in a coming demonstration, and is trying to decide how to move the initiative from the lab to a formal combat program. Golden Horde is one of three fast-tracked “vanguard” programs that pulls money and resources from across the Department of the Air Force to become a viable option in warfare sooner.

But after more than a year in development, the Air Force is still figuring out how to create the so-called “playbooks” that would tell a networked munition how to “think” in real life.

“We need to learn a little bit more about how it would apply to those weapon sets and target sets as we move forward,” Collins said.

Researchers hope to let outsiders play around with the software that enables Golden Horde to figure out some of those problems.

“We’re looking at trying to develop and mature the architecture of the NCA [networked, collaborative, autonomous] weapon system … and also set up a virtual capability for operational experimentation for competitions with industry, academia, operators, to come together and learn more about what NCA brings to the fight, as well to hone skill sets and playbooks to go after certain targets and different targets,” Collins said.

One AFRL official recently noted that engineers will test Golden Horde’s radio software on a swarm mission in October to feed data into a virtual model. That “digital twin” can help speed development using predictive algorithms, without needing to build physical prototypes.

A flight test is coming later this year, despite revamping certain parts of the program, Collins confirmed.

“We took a step back to assess what we’ve gained from it, from [Raytheon Technologies’ Miniature Air-Launched Decoy], from everything else we were doing, and then really tried to identify what was going to be the bigger, broader enduring capabilities for our weapon system,” he said. “We did identify that to continue forward with the Small Diameter Bomb test would give us good insight into the Air Force’s foray into a collaborative weapon with those SDB Is. And, frankly, a lot of the modifications have already been made to those SDB Is, so we’re very close to being ready to utilize those.”

AFRL may drop the collaborative version of MALD from Golden Horde altogether. MALD can confuse or jam enemy air defenses to allow friendly aircraft to slip into a protected area.

“We’re still assessing that right now. It’s still in question whether we see that as existing in the long haul,” Collins said. “We’re going to continue with SDB I, and then pivot to both virtual and surrogate platforms as well, and continue a very rapid, regular assessment and evaluation of how to put that [software] onto existing weapons.”

AFRL was working with Scientific Applications and Research Associates, Inc. to integrate SDB I into a swarm network, and with Georgia Tech Applied Research Corp. to do the same with MALD.

Right now, the Air Force has to retool existing munitions to work together. In the future, weapon systems should come ready to plug into a collaborative swarm, he said. He envisions that hypersonic weapons and others like the Stand-In Attack Weapon, a variant of a Northrop Grumman missile used to destroy enemy air defenses, will be part of the operational swarm.

“We certainly don’t want to go out into the field to modify thousands of weapons with new radios,” Collins said. “We’d rather get it into the production line at beginning of the program.”