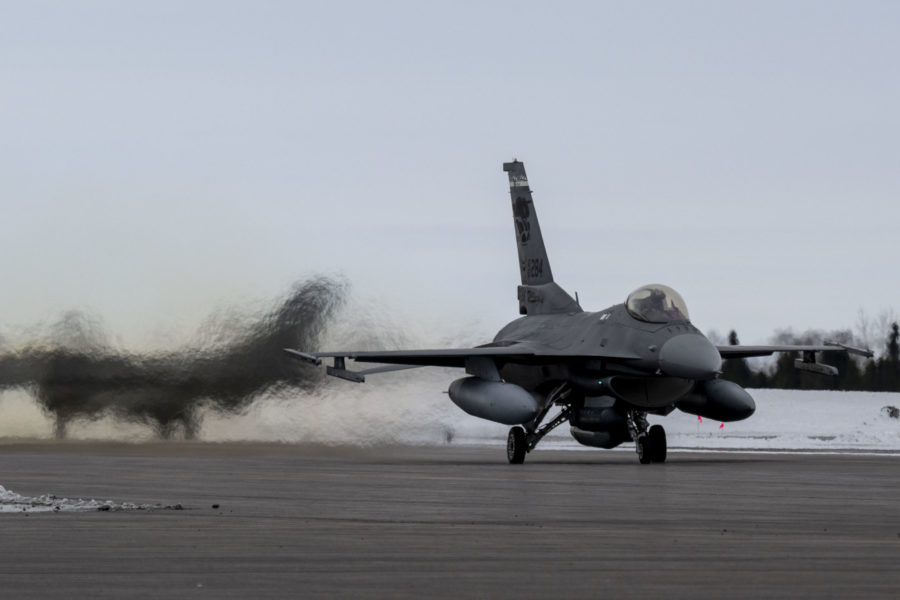 USAF to Increase Arctic Investment as Strategy, Wargames Outline Needs in the Region

The Air Force spends around $6 billion a year on systems and priorities focused on the Arctic, a number that is expected to grow as the region’s importance rises and the Department of the Air Force’s first-ever Arctic Strategy hits its one-year anniversary.

While the exact number is difficult to determine, because USAF is a “global Air Force, … our latest estimates are that we’re spending a pretty decent amount, certainly, out of the Department of the Air Force’s budget on things that are clearly related to Arctic security, Arctic operations,” said Lt. Gen. S. Clinton Hinote during a July 27 Wilson Center event on the importance of the region.

That number will grow as the Air Force does things such as modernizing the North Warning System of radar sites, which has been “put off for too long. So we know that we’re going to have to work with our partners in Canada to be able to do that,” he said.

The Air Force, through recent wargames, has found that “We’re not nearly as secure and safe as we may be thinking we are, especially in the avenues of approaches over the Arctic,” Hinote said. The region is the shortest route for competitors, and “our views of the Arctic as a strategic buffer is eroding” because of military actions by Russia and China as well as the impacts of climate change.

Air Force wargames have shown that conflict starts in the region “when one side is doing something that somebody else is not aware of,” demonstrating the importance of awareness across the region, he said. These events have changed the Air Force’s perception. Previous wargames have focused on great power competition in Europe and the Pacific, “and one of the things that we felt like we did not understand as well [was] how that competition would spill over into the Arctic, how our competitors would use the Arctic in a way of doing something strategically bad for the United States and for our allies and partners,” Hinote said.

Arctic nations are collectively seeing the importance of the region militarily and working together on ways to increase these indications and warnings. The U.S. and Norway, for example, are collaborating on launching new polar-orbit satellites to improve space surveillance of the region.

“We also see ways of getting synergy between the investments that our allies and partners are making in things they’re doing as well,” Hinote said. “But I think it’s important that the American people know, it’s not like we’re not spending a decent amount of money up in the Arctic, because there’s a pretty good amount that’s going up there right now.”

The Department of the Air Force is responsible for about 80 percent of the overall Defense Department’s resources to the region, “so we’re up there with some amount of real capability, and that’s an important part to homeland defense.”

The U.S.-and-Norway collaboration is just one example of the cost-sharing opportunities that can increase capability without the Department of the Air Force having to shoulder the entire financial burden, said Lt. Gen. William J. Liquori Jr., the Space Force’s deputy chief of space operations for strategy, plans, programs, requirements, and analysis.

“We’re trying to do what we can to maximize the resources that we’re able to deliver to this region, and others, through partnerships as well as our own individual budget in some cases,” he said. “We spend some in our budget, and then a partner spends in their budget as well … ultimately delivering more capability than either of us could do on our own.”

The Department of the Air Force in July 2020 unveiled its first-ever Arctic Strategy, which outlined the importance of the region as Russia builds up its military presence and China looks to normalize its own presence there. As the strategy passes its one-year anniversary, the department is working to implement it. This effort will be a “lifetime effort for us—we got a lot more to go,” Hinote said.