Skip to content
An F-16 releases a flare in the U.S. Central Command area of responsibility. F-16s have had countless capability upgrades, patches, and life-extension mods since joining the fleet in the 1980s and early 1990s. Photo by Staff Sgt. Chris Drzazgowski.
Expand Photo 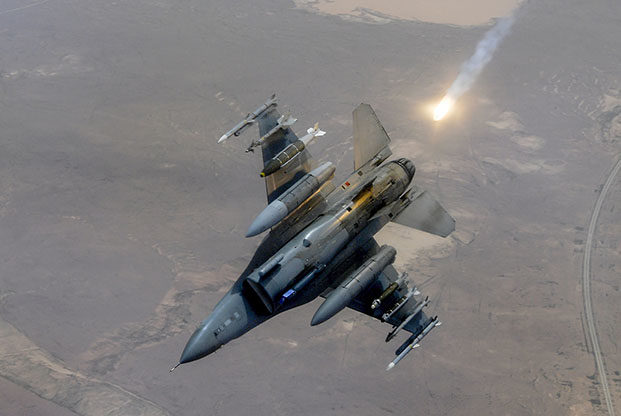 Air Force Keeping F-16s, Not Moving Toward Fighter Derived From MR-F or T-7 for Now

DAYTON, Ohio—With upgrades, F-16s can serve as a numbers-builder in the combat air forces until the 2040s, and it’s not necessary to launch its successor yet, program officials said at an industry conference.

Brig. Gen. Dale White, program executive officer for fighters and advanced aircraft, said much of the recent service-life extension program (SLEP) work on the F-16 has bought years of additional life for the type, and he’s gotten no instructions to start work on its successor, which USAF has dubbed the “MR-F” or “MR-X,” for a future multirole fighter.

White also said there’s no requirement passed to AFLCMC to evaluate the Boeing T-7 as a possible successor platform to the F-16.

The MR-F first showed up in planning documents in 2021 that indicated the Air Force was looking to an F-16 successor in the mid-2030s. The documents suggested the aircraft sought would not be intended as an all-up, very stealthy jet, but what Chief of Staff Gen. Charles Q. Brown Jr. characterized as a “fifth-gen-minus” fighter, for which affordability, and not necessarily high-level survivability, would be a key requirement.

Former head of Air Combat Command retired Gen. James “Mike” Homes suggested that an armed version of the Boeing T-7 trainer could be adapted to such a role and also serve as an export fighter for partner countries lacking the funds or expertise to operate and maintain a more complex aircraft.

But “I have nothing in the mix with requirements from ACC to pursue that,” Bailey said of the MR-F and T-7 derivative.

The Air Force last year laid out its future fighter force structure, necking down from seven fighter types today to “4+1,” in which the F-22, later replaced by the Next Generation Air Dominance system, is one; the F-35 is the second; the F-15E/F-15EX are the third; and the F-16 is the fourth—with the A-10 as the “plus one” set to phase out in 2030. The service posited the clean-sheet MR-F design or T-7 derivative as succeeding the F-16.

“The 4+1 is still the strategy,” White said, “and there has been talk about the MR-X. We do what the requirements folks tell us. It’s good to have options.”

White said it’s “a healthy thing” that the Air Force has the F-35 and F-15EX in production for itself and that Lockheed Martin is still building F-16s for the international market. Technology created for the latest F-16s can be inserted into the Air Force’s existing F-16 aircraft, he said, noting that a major radar upgrade for the jet was “actually paid for by Taiwan.”

“While I don’t have any firm requirement” for an F-16 replacement, “I know the MR-F piece is going to continue to be looked at, because at some point we’ll have to have a replacement” for the F-16.

He said the MR-F for now resides with ACC’s program planning shop.

The F-16 is structurally healthy and can continue to serve, Bailey said.

“The F-16 provides the capacity in our Air Force: lots of fighters to cover all kinds of combatant commander needs,” he said. However, “it has to be relevant. Not just the F-16 of today.”

White said F-16s are being fitted with active electronically-scanned array radars “as fast as we possibly can,” saying this modification is underway “at nine different bases” and the F-16 depot at Hill Air Force Base, Utah. The radars expand the sensing range of the aircraft, the number of targets it can track, and the modes with which it can prosecute ground targets.

The jets will also get “a host of other upgrades: EW (electronic warfare) kind of things,” which, along with the radar, are the “big mods” being done on the fighter, White said.

The F-16 entered Air Force service in 1978 but has been modified over the years with more powerful engines, radars, self-protection systems, and nearly every munition the Air Force fields.

Additional upgrades depend on the capabilities available across the fighter enterprise, White said, and any upgrade to the F-16 could be costly because of the numbers of the aircraft.

Future upgrades may borrow from the foreign military sales “side of the house,” he said, wherein USAF can apply upgrades that F-16 customers are adding to their new or existing jets.

Most of the Air Force’s F-16s will also eventually wear the “Have Glass” finish, which substitutes a new radar-absorbing coating for the jet’s traditional gray-on-gray paint scheme.

Asked if the Air Force has F-16s available for potential transfer to Ukraine, White said “the needs of Ukraine today are being met with the systems you see being exported to Ukraine—HiMARS, etc.”

Ukraine has “other needs” as well, and “a few years down the road … some of those could involve fighter aircraft,” he said.