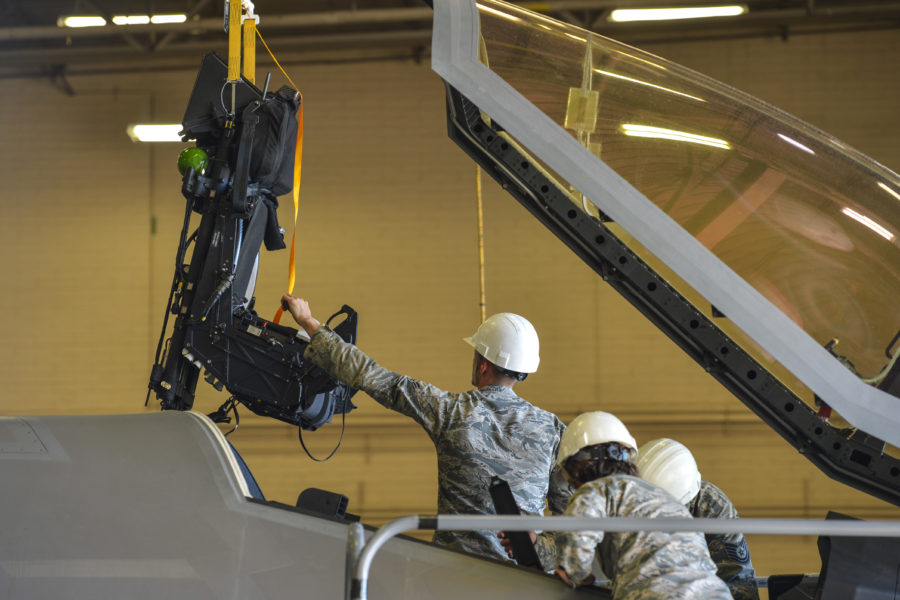 Two weeks after announcing a stand down of its F-35 fleet to check for potentially faulty parts in the fighters’ ejection seats, the Air Force has mostly completed its inspections and the aircraft have been cleared to resume normal operations, Air Combat Command announced Aug. 15.

The stand down, ordered July 29, affected fleets across ACC, Air Education and Training Command, U.S. Air Forces in Europe, and Pacific Air Forces. In a statement to Air Force Magazine, an ACC spokesperson said most of the service’s 349 jets were inspected, along with additional supplies of the part in question, a cartridge-actuated device, or CAD.

Each fighter has two CADs, and all told, 706 of the cartridges were inspected. Of those 706, four “were found to be suspect” and replaced, the spokesperson said.

A number of F-35s remained uninspected as of Aug. 15. The ACC spokesperson clarified that they are in depot status. Under a Time Compliance Technical Directive, all aircraft must be inspected within 90 days.

“Those aircraft will be inspected within the TCTD’s 90-day compliance period or before their next flight,” the spokesperson said of the remaining uninspected fighters.

The issue at the heart of the stand down was discovered in April during a routine inspection at Hill Air Force Base, Utah, when maintainers found a faulty CAD that had an insufficient amount of explosive powder. Without the needed explosive powder, the cartridges may not initiate necessary actions if the pilot commands an ejection.

Inspecting the cartridges involved taking each jet out of service for a day so its seat could be removed from the aircraft. From there, the CADs can be removed quickly and inspected. Maintainers who are unsure whether a cartridge has enough explosive powder can X-ray it.

The Air Force’s F-35s are not the only fleet that has encountered the issue. The Navy and Marine Corps have reportedly conducted cartridge replacements on at least five different kinds of aircraft, and Martin-Baker seats are used by dozens of other countries and air forces. Germany, Israel, and the United Kingdom have all announced inspections as well.

Lawmakers and advocates have closely followed issues with Air Force ejection seats for several years, leading to legislation. As a result, the services are “taking no chances. They are going for zero risk,” a Martin-Baker official previously told Air Force Magazine.

Editor’s Note: This story was updated on Aug. 16 to clarify the role the CADs play in the ejection process.