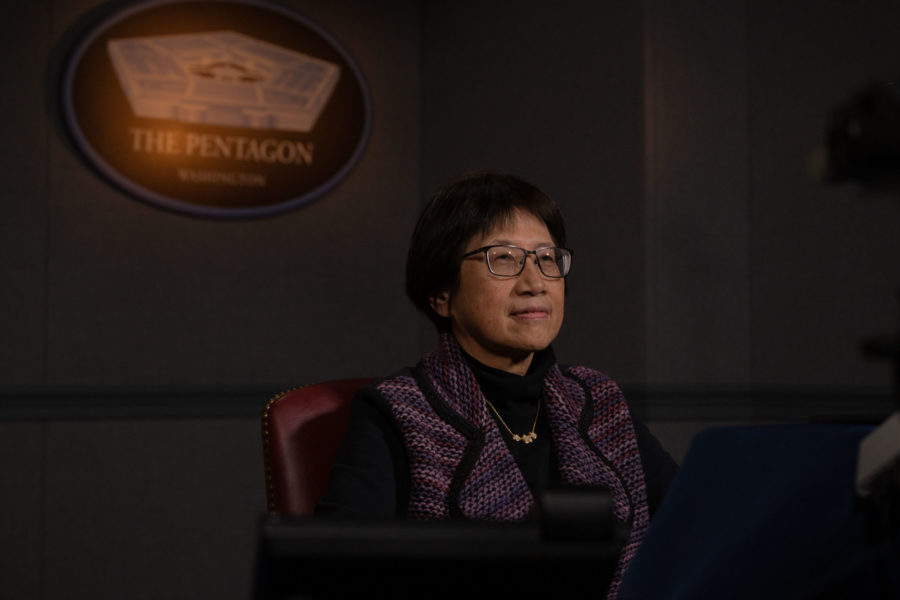 Artificial Intelligence, integrated networks, hypersonics, and microelectronics are among the top priorities for Heidi Shyu, undersecretary of defense for research and engineering. In a wide-ranging discussion with reporters Jan. 13, Shyu also said hypersonics test capacity will see a big boost in the fiscal 2023 program objective memoranda and that a major experiment in joint all-domain command and control will take place in February, connecting platforms from all the services.

Shyu said she had planned to reduce the 11 top priorities created by the previous administration.

“I thought I could neck it down quite a bit, but I sort of failed, and I think I’ve ballooned it instead,” she said. The new list should be published soon. Shyu didn’t want to get ahead of the announcement but mentioned “trusted AI” and integrated networks as high on the list. The latter is necessary “to use autonomy on an unmanned system,” she said. She also mentioned hypersonics and microelectronics, which were the top two under the previous administration. Microlelectronics displaced hypersonics as the top priority on the previous list in 2020.

Microelectronics is “a critical piece that’s in everything,” Shyu said, adding that she is working with the Department of Commerce on the area and that Congress “is interested in giving us additional funding” for the work.

Shyu said the Air Force’s AGM-183 Air-launched Rapid Response (ARRW) boost-glide hypersonic missile has suffered from both supply chain disruptions and the COVID pandemic, and this has contributed to setbacks in the program.

All the services are “pushing” hypersonics contractors “on an accelerated, … very aggressive schedule,” she said, and problems are to be expected. She said the Army’s hypersonic missile will likely become operational in 2023, and the Navy’s should be operational in 2025, because “it’s the same” platform, just sea-launched. She did not comment on the timing of the ARRW.

Without specifying any one program, Shyu likened the hypersonics enterprise to SpaceX: “Have they had failures? Yes. Are they considered successful? Yes. They’re considered a very successful company, but they’ve had quite a number of blow-ups.”

She said she will continue to push the hypersonics contractors “hard.”

“I have to give the Army and Navy a lot of credit for not just working collaboratively together … but working very closely with industry and [the] laboratories,” she said.

While the Air Force’s air-breathing hypersonic missile programs will likely be “cheaper” than all the services’ boost-glide systems, they won’t have “quite the same range as ship-launch and Army [ground] launch. So you really need all of the above … You need diversity.”

She acknowledged that the Pentagon’s hypersonic test ranges and wind tunnels are operating at full capacity, which has slowed some of the test effort, and said “a significant increase in our test infrastructure” is “embedded” in the fiscal 2023 program objective memoranda.

Shyu said her office is working closely with contractors to develop the hypersonics “ecosystem” that will create the industrial capacity to make hypersonic systems at scale. The initial examples of all hypersonic missiles will be high, she said, but she is working to “drive the cost down” with an effort to “productize” the systems and build them in quantity, which should reduce unit cost, she said. Shyu also is working to “automate” hypersonics construction processes “rather than hand-build them.”

“If we automate some things, the cost will definitely come down. And if you buy materials … in bulk, it’s cheaper than buying onesies and twosies,” she said, comparing it to the bulk food store Costco. But “we’re looking at different technologies, … different materials, … that can help drive cost down as well.”

Defense Secretary Lloyd J. Austin III and Congress are highly supportive of hypersonics efforts and Congress is going to “give me the money, so I’m going to be sprinting” to operationalize the technology.

She declined to offer analysis of Chinese, Russian, or North Korean hypersonics capabilities because of classification. But Shyu said she is “not interested [in being] in a horse race with China or Russia” in hypersonics. “’You have 1,000 rockets, therefore I need to be having 1,000 rockets.’ That a losing proposition.”

A major exercise is coming next month that will demonstrate major advances in JADC2, Shyu said.

“In February, there’s going to be a demonstration in which we literally stitch together Army, Navy, and Air Forces,” she said. “So I’m pretty thrilled. And I’m going to fly out and observe the system, … the demo, myself.” She declined to elaborate, except to say that “we will be able to demonstrate that platforms, across services, can literally talk to each other.”

Shyu’s billet now has a seat on the Joint Requirements Oversight Council (JROC), made up of the service vice chiefs, who deliberate about the department’s highest operational needs. Shyu said she’s had the opportunity to voice her technical concerns and that they have been listened to.

At the last such meeting, Shyu reported, she “poked at … billions” being spent to fill a “capability gap” in a space system.

“To close a capability gap on an old system made no sense to me,” she said. “That chunk of money is much better spent on developing a brand new system.” The then-chairman of the JROC, USAF Gen. John E. Hyten, gave the services direction to “come back with a revised plan” as a result, she said. She said having her position on the JROC is “working fantastic.”

She also said the Pentagon is “absolutely headed” toward a “resilient space architecture.” It’s also looking at “how to leverage a lot more of the commercial satellite capability, the commercial launches, just to drive the cost down.”

Shyu expects the fiscal 2023 research budget to be the largest ever for the Pentagon. She hosted members of Congress for a mid-December meeting “and they were thrilled. Halfway into my briefing,” they asked her, “’How much do you need?’” So “there’s a lot of enthusiasm for stuff I’m doing … I’m very happy” with the numbers, she said.

Broadly, Shyu said she is stepping up her engagement with industry, having monthly meetings with top prime CEOs and chief technology officers, as well as groups of small businesses.