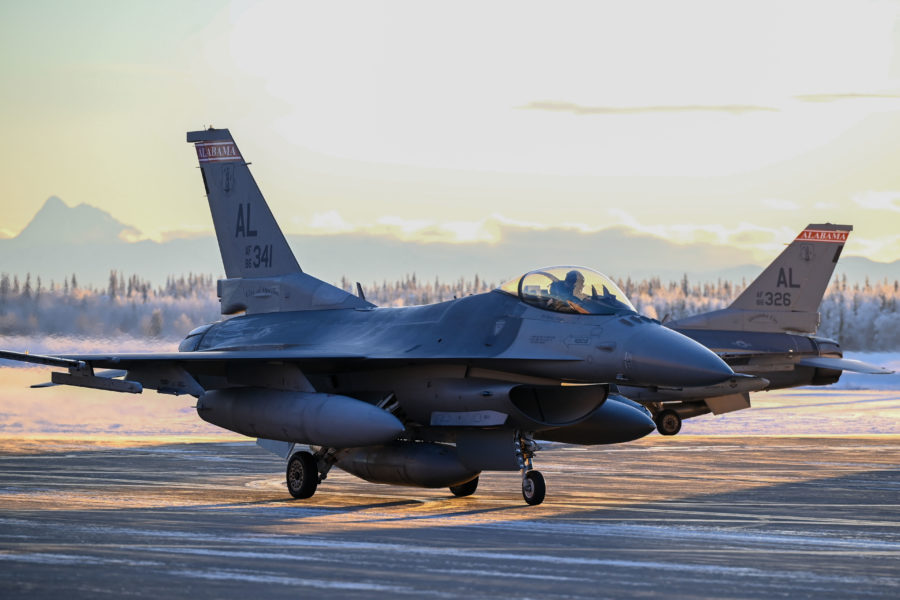 With the Alabama Air National Guard’s 187th Fighter Wing set to receive its first F-35s this year, the unit’s F-16Cs are getting a new home—much farther north.

The first two of those F-16s, still adorned with their “Alabama” tail flashes, flew into Eielson Air Force Base, Alaska, on Jan. 12. Within months, they’ll sport a new “wraith” black paint scheme as adversary aircraft with the 18th Aggressor Squadron. The two jets are the first of 19 “new-ish” aircraft the squadron will get this year, Squadron Commander Lt. Col. Albert Roper told Air & Space Forces Magazine in a phone interview.

“They’re fully combat-capable, combat-mission-ready aircraft,” Roper said in a phone interview. “So we’ll just bring them up here to Alaska. … they’ll go to the paint barn, we’ll do a new paint job on them. But we flew up here last week, so they’re flyable aircraft. And then once we get our pilots trained, so they get their familiarization flights, ground training, [simulator] training, computer-based training … we’ll start flying and put them on the line and put them up in the air and flying those aircraft as soon as the next couple of weeks.”

The Alabama ANG F-16Cs are Block 30 versions, representing an upgrade from the older F-16Cs the squadron has today, Roper said.

“There’s about a decade gap in the software upgrade and hardware upgrades,” Roper said. “So I look at it as the airframe and the engine, it’s still a Block 30 F-16. But [they] kind of ripped out things like the coaxial cables, speed transmitters, and the processors and replaced it with kind of like ethernet and then increased the processing capability of the computers.”

Other upgrades represent “leaps and bounds in technology,” Roper said: Improved center display units provide greater clarity for pilots and the avionics suite supports the Hybrid Optical-based Inertial Tracker, or HObIT, which attaches to a pilot’s helmet and provides targeting data and more.

That means the 18th Aggressors can be more effective training assets, “to increase what we’re able to replicate and present to the combat Air Force,” Roper said. That means replicating more advanced threats in everyday training and at some of the Air Force’s biggest training exercises every year, including Northern Edge in May, and Red Flag-Alaska events in June and August.

The remaining ANG F-16s will arrive over the next several months, Roper said, with the last deliveries targeted to come before Sept. 30. Meanwhile, all but two of the 18th Aggressor Squadron’s legacy F-16s will head to the Boneyard at Davis-Monthan Air Force Base, Ariz. The two that will remain are dual-seat F-16Ds that will be retained for orientation flights.