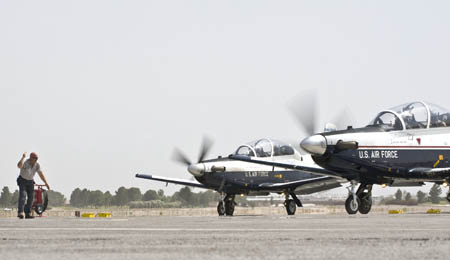 Simulating slow-moving, low-altitude threats for the first time at the Air Force Weapons School, turboprop T-6A Texan II trainers began flying “aggressor” sorties from Nellis AFB, Nev., this month. “It is difficult for fighter aircraft to simulate low and slow targets, so the T-6 Texan II fills that void,” said Lt. Col. Daniel Garoutte, 33rd Flying Training Squadron operations director from Vance AFB, Okla., in May 15 Nellis release. “We add another dimension to [the weapons school students’] decision-making, and we increase the numbers of the opposing forces” that they face in the training drills, he added. Paired with F-15 and F-16 aggressor aircraft from Nellis, the Vance T-6s force the students to “prioritize their intercept decisions based on the type of threat they were facing,” explained Maj. Jason Zumwalt, adversary integration boss with the USAF Warfare Center. Debuting in this month’s weapons instructor course, the Texan IIs add a “unique intercept challenge against an asymmetric threat,” he said. (Nellis report by SSgt. Chris Hubenthal)