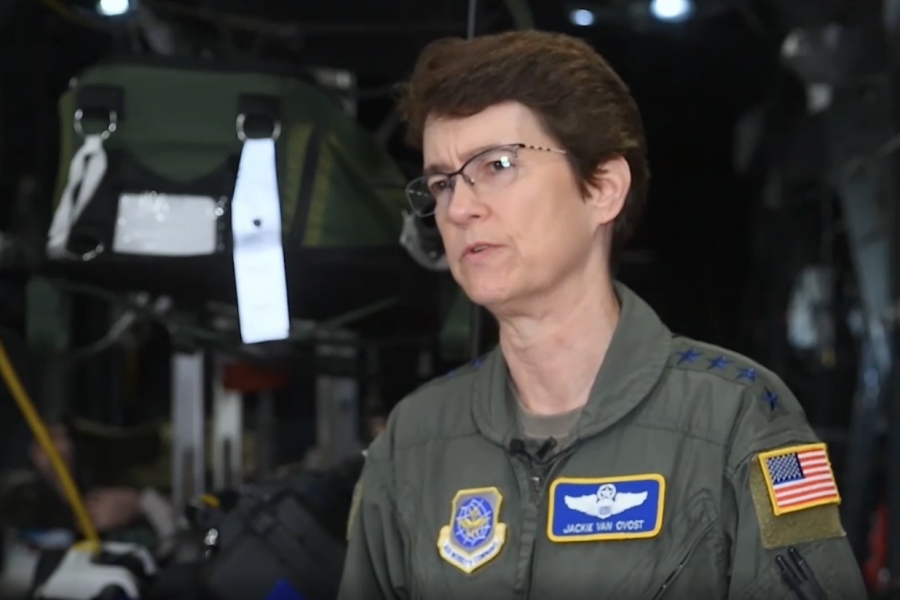 After KC-46, USAF Looks Ahead to ‘Bridge Tanker’

This particular tanker would bridge the gap in capabilities offered by the 179 Boeing KC-46s currently being delivered and a later tanker known as “KC-Z.”

Speaking at the Airlift/Tanker Association’s virtual conference, Van Ovost distinguished between the bridge tanker, ongoing studies of fee-for-service commercial tanking to bolster the military’s capacity, and the still-undefined KC-Z program.

“The Secretary of the Air Force has committed to a continuous recapitalization of tanker aircraft,” Van Ovost said. “We’re going to have a bridge tanker—we’ll have a full and open competition—on an aircraft to continue to recapitalize … the KC-135.”

Stratotankers will be 70 years old when the Air Force receives its last KC-46, and maintaining the older tankers is getting too expensive, she said. “The longer we keep” the KC-135, she said, “the higher sustainment costs are going to be.”

This new tanker will be a “non-developmental” program, meaning it will be based on an existing, proven aircraft, according to an Air Mobility Command spokesperson. The Air Force is defining which capabilities it needs in its next tanker and how it will “immediately follow the existing KC-46A delivery timeline,” she said.

She did not say when the tanker competition will unfold. Industry officials have estimated that if the Air Force wants production of the aircraft to closely follow behind that of the KC-46, which is supposed to end around 2027, the service will need at least a five-year head start. That means initial funding for a bridge tanker may appear in the fiscal 2022 budget request now being crafted.

Only two tankers are mature enough for a competition of this kind: the KC-46 and the Airbus A330 Multi-Role Tanker Transport, which lost out to the KC-46 in the Air Force’s previous tanker contest in 2011.

Boeing is expected to offer its KC-46 for the next competition as well, despite the program’s ongoing troubles. Lockheed Martin has teamed with Airbus to offer a variant of the A330 when the Air Force issues its request for proposals. Those designs could be upgraded to offer capabilities the KC-46 currently lacks, but would not be a completely new design, as is envisioned for KC-Z.

“We’re still undergoing basic studies on the types of attributes that this aircraft would have: Whether it’s autonomous, or whether there’s a pilot in it; whether it needs to be stealth-like, or just needs to be really large,” Van Ovost said of the later KC-Z tanker.

Commercial air refueling is a separate matter, Van Ovost noted. While this next tanker is meant to replace older ones, the Air Force is looking at commercially owned planes to refuel jets on training missions.

They are “not for deployments, but for training here across the United States to help our fighter fleet, and help our other fleets to ensure that our joint force has the refueling contacts they need to stay ready for the joint fight,” she said.

Michele A. Evans, Lockheed Martin Aeronautics vice president, told Air Force Magazine in September that the company expected the Air Force to issue a request for information by the end of December for the bridge tanker.

If the Lockheed-Airbus team’s A330 MRTT variant earns an Air Force contract, the work would be done in Marietta, Ga., in a space that has hosted C-5 and C-130 work. Evans said USAF has “made it clear they want to leverage commercial variants” for future tanker acquisitions.

When the Air Force chose the KC-46, it was partially because that jet is smaller than the A330. Its size allows for a larger buy and gives the Air Force more flexibility in spreading them around to airfields with smaller ramps and runways.

Service officials have said, however, that AMC is still interested in a large aircraft like the KC-10 that is headed for retirement. Bigger aircraft let fighter squadrons “self-deploy” alongside a tanker, ground crew and ground equipment in a single package, they argue.