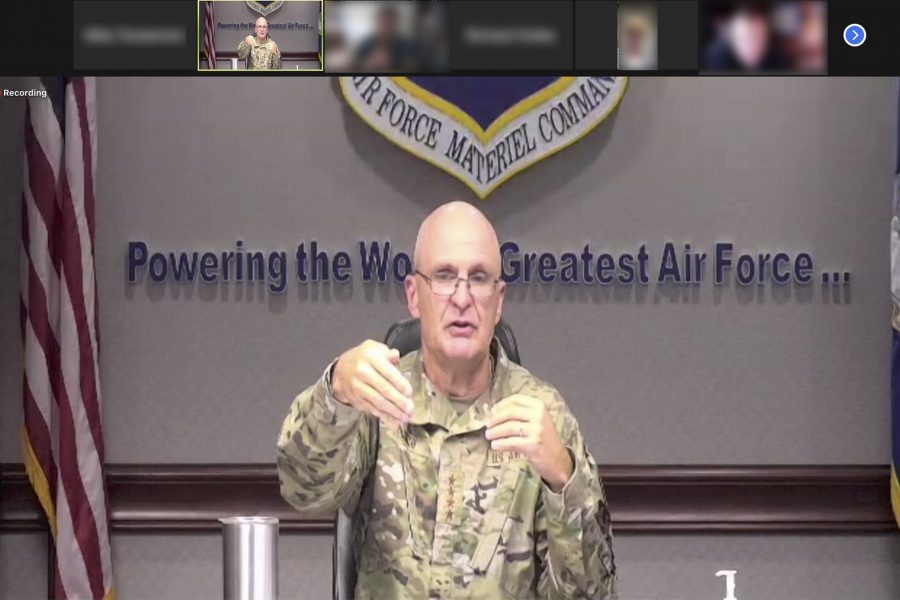 To go with future “e-programs” that will be digitally built and retired before reaching their maintenance- and upgrade-intensive years, Air Force Materiel Command is beginning to think about how it will reorganize depots and sustainment, commander Gen. Arnold W. Bunch Jr. said Sept. 16.

Air Force acquisition chief Will Roper is touting future programs that will “flip the paradigm” and spend only 30 percent on sustainment, rather than the 70 percent that is now typical, Roper said Sept. 15. Bunch said “dialogues” are underway about what that will mean for future sustainment.

Plans for the future of depots under the new paradigm are “not fully defined” yet, Bunch said in a press conference.

“Some of the legacy systems are going to need the full depot capacity we have for quite some time,” he noted. But he has begun discussions with Lt. Gen. Warren D. Berry, deputy chief of staff for logistics, engineering, and force protection about what future sustainment based on Roper’s model will look like, he said.

He continued, “We are in those dialogs. We have not completed them … and we are not at a point in that where I could tell you we’re going to consolidate anything,” but those discussions must happen soon regarding “the new aircraft that we bring in.”

Bunch said he’s under no deadlines to craft a plan or a report that will spell out the future of the depot structure.

The biggest pole in the tent of bringing about both Roper’s vision of digital production of new systems and sustainment of them is having a robust Information Technology infrastructure in AFMC, Bunch said. The need to build it was identified in “The AFMC We Need” white paper Bunch put out soon after taking over the command, he said.

The infrastructure is needed “so we can make the proper linkages, share and protect [data] in the digital environment,” he said. “We know we can do it,” and AFMC is doing so on the T-7 trainer and Ground Based Strategic Deterrent projects, as well as “a few other ones I won’t go into.” But, greater depth and capability is still needed to expand the system, Bunch said. Likewise, Airmen need training and seasoning to “set them up for success” in the new construct, he said.

In order to propel innovative projects across the so-called “valley of death” between successful prototyping and programs of record, Bunch noted that AFMC launched its own Transformational Capabilities Office this summer, which will connect program executive officers, “end users,” and prototyping projects. The goal will be to “push it over the line and get it … to a fielded system.”

The new office will decide if or when new “Vanguard” projects, like the unmanned Valkyrie system or “Golden Horde” concept, proceed to programs of record. The office is an outgrowth of the Air Force’s Science and Technology 2030 program.

“What we’re doing in this Transformational Capabilities Office is better linking up the program office … with the researchers [and] end users, so we get more out of these prototypes, and demos, and experiments, and campaigns,” Bunch said.

“I think we’re making some great strides. This is one of those that can help us as we embrace [Chief of Staff] Gen. [Charles Q.]  Brown’s ‘Accelerate Change or Lose’” campaign.

“The way we’ve established it is, we’re going to have an annual process review to see if we have more Vanguards,” Bunch explained. “And that process is underway, and it is being reviewed. [It] starts at the capability developing working group, and bubbles up to the capability development council,” and decisions will be made there about “whether it will be a Vanguard or not.” He added there are “no guarantees there will be another one, no guarantees there won’t be another three.” It will depend on the capabilities being offered.

“We’re doing this on a regular basis, to see what’s out there,” he said, reporting that he is “very pleased” with the collaboration between PEOs, the Air Force Research Lab, the test control officers, and the major commands.