Skip to content
Secretary of Defense Lloyd J. Austin III delivers the oath of office at the swearing in ceremony at the Pentagon for Adm. Christopher W. Grady as the 12th Vice Chairman of the Joint Chiefs of Staff, Dec. 20, 2021. DOD Photo by Chad J. McNeeley.
Expand Photo 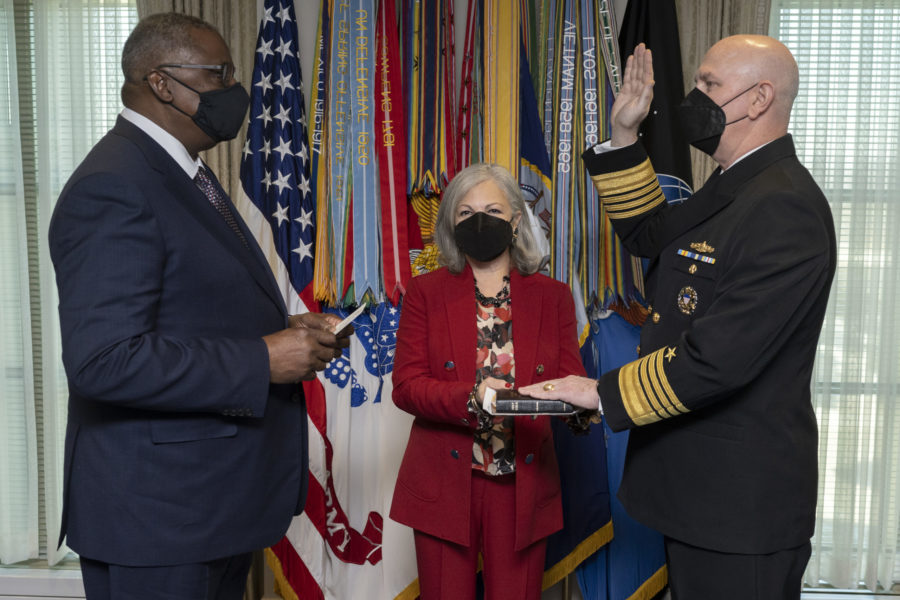 The Pentagon confirmed Dec. 20 that Adm. Christopher W. Grady was sworn in as the 12th Vice Chairman of the Joint Chiefs of Staff. The Joint Chiefs’ office confirmed that the ceremony with Defense Secretary Lloyd J. Austin III happened at about 1 p.m.

The swearing-in fills a monthlong vacancy following the retirement of Air Force Gen. John E. Hyten, whose last day was Nov. 19. The Senate confirmed Grady on Dec. 16 after his nomination testimony Dec. 8.

Pentagon Press Secretary John F. Kirby said that among Grady’s duties will be leading the Joint Requirements Oversight Council and serving as a senior member of the Nuclear Weapons Council.

Grady leaves his position as commander of U.S. Fleet Forces Command/U.S. Naval Forces Northern Command since 2018. In that role, he oversaw the naval leg of the nuclear triad.

In the Navy, Grady also championed the development and institutionalization of “Ready Relevant Learning,” part of the Navy’s modernization doctrine.

In his 11 months in office, Austin has attempted to redouble the department’s efforts to make China the “pacing challenge” of the U.S. military. The Secretary has already visited the Indo-Pacific three times, with another trip planned in January.

At his confirmation hearing, Grady was asked to address one aspect of China’s military growth—its rapid nuclear buildup.

“I think that China’s breakout is, as [U.S. Strategic Command] Adm. [Charles A.] Richard has called it, is, indeed, spectacular and, indeed, breathtaking,” Grady said, calling for deterrence against both China and nuclear-armed Russia. “Modernization of the nuclear triad will be the underpinning of that deterrence effort against two nuclear competitors.”