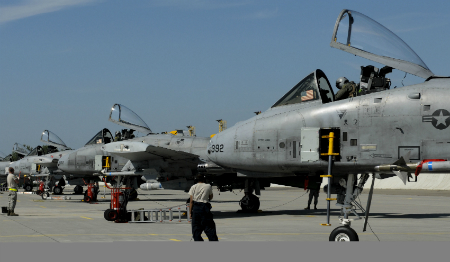 Numerous Active Duty combat units in the United States, Europe, and the Pacific on Tuesday began standing down as the Air Force absorbs the funding cuts imposed by budget sequestration, announced Air Combat Command. Taking this step, which affects about one-third of Active Duty combat aircraft, will ensure that other combat units supporting worldwide operations can maintain sufficient readiness through the remainder of the fiscal year, said ACC officials in an April 9 release. “Approximately one-quarter of ACC’s Active Duty squadrons and Active Duty pilots in our active associate units have stopped flying,” command spokeswoman Kelly Sanders told the Daily Report on Tuesday. “The resources from these units will enable units deployed or preparing to deploy to maintain their currency and flight operations,” she added. The standdown stems from the funding cuts to ACC’s operations and maintenance account from the sequester. ACC is absorbing the cuts in part by having pilots fly about 45,000 fewer training hours between now and the end of the fiscal year on Sept. 30, states the release. “We must implement a tiered readiness concept where only the units preparing to deploy in support of major operations like Afghanistan are fully mission-capable,” said ACC Commander Gen. Mike Hostage. “The current situation means we’re accepting the risk that combat airpower may not be ready to respond immediately to new contingencies as they occur,” he added. (See also Tiered Readiness at ACC.)