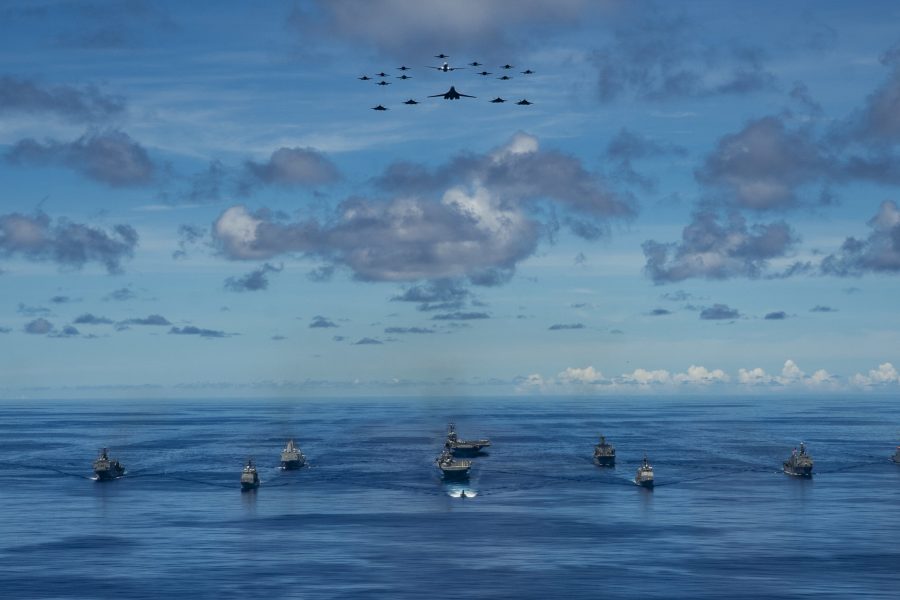 ABMS Goes to the Pacific in ‘Valiant Shield’

American military forces used a large-scale training exercise in the Pacific this month to experiment with new ways of commanding troops as part of the Air Force’s Advanced Battle Management System effort.

As the U.S. postures against China, the scale and location of Valiant Shield offered a chance to practice passing surveillance, targeting, and other data between the services to better respond to threats in the vast Pacific region.

“This training enables real-world proficiency in sustaining joint forces through detecting, locating, tracking, and engaging units at sea, in the air, on land, and cyberspace in response to a range of mission areas,” according to U.S. Pacific Fleet. “The range of capabilities include maritime security operations, anti-submarine and air-defense exercises, amphibious operations, and other elements of complex warfighting.”

It’s the third ABMS exercise so far and the second this month, following a homeland defense training event in early September that practiced shooting down a cruise missile surrogate.

Over the course of two weeks, U.S. forces sunk the decommissioned USS Curts frigate with fire from Navy and Air Force aircraft, multiple cruiser ships, and a fast-attack submarine. The USS Antietam also struck an island off the coast of Guam with a Tomahawk cruise missile, using targeting data provided by Marines. Troops also pulled in virtual training to simulate more aircraft and ships than could participate in real life.

“What we did this time was use different ABMS options to link the joint force in the Multidomain Operations Center-Forward that we were experimenting with, which contained a joint fires cell manned by [representatives] from all the services and links to the Multidomain Task Force, the carrier strike group, as well as all the USAF locations,” Col. Brian Baldwin, 36th Air Expeditionary Wing commander at Andersen Air Force Base, Guam, told Air Force Magazine in a Sept. 24 email.

Air Force personnel communicated with parts of the Navy carrier strike group, like fighter jets and command-and-control assets. “The F-22 is a state-of-the-art aircraft,” Rear Adm. James Aiken, Carrier Strike Group 3 commander, told reporters on a Sept. 24 call. “With joint all-domain command and control, the Navy can actually leverage a fifth-generation aircraft. It becomes a force multiplier for all the services being integrated.”

Software automated some processes, like pulling air tasking order information to tell pilots what time they should meet a tanker to refuel and what route they should take, Baldwin said.

Another app showed commanders the real-time status of various bases they could use to store resources and where to launch and land planes. That software in the deployed ops center could shape how the military thinks about spreading forces around an area where installations are threatened or where formal infrastructure doesn’t exist.

Valiant Shield tested the idea of using a group of multiple aircraft to “talk” to others and direct them around the battlefield.

“We had the KC-46 in Hawaii with a lot of the cloud network-sharing applications that we’re working on for [ABMS],” Baldwin added on the call. “They integrated with F-22s and [a] C-17 out of Hawaii as a forward node that would enable the joint fight over a wide area, and enhance that data-sharing through the network.”

“If all you had was text messaging on your phone, you journalists would be in big trouble, because your cell coverage may be down or whatever, so you have backup ways to communicate,” he said. “The same holds true of me. We’ll want to be able to talk to everybody all the time with backups, so that it becomes very difficult to take away our communication. The way you do that is with multilayered and with networked systems.”

About one-third of the ABMS objectives were pared back because of timing and the coronavirus pandemic, he added.

The military is still wrestling with how best to share information and react quickly in a place like the Pacific Ocean, where combat assets could be thousands of miles apart and interrupted by signal jammers or other weapons.

“If there was an easy button, we would love to hit it,” Baldwin said. “Working on getting all of those sensors that have data out there, to then get those available for all the joint warfighters, to then make decisions and employ the right kind of effects, is what we are after.”

More than 60 companies have been tapped to participate in ABMS so far, though not all of their products will end up in regular military operations. They are each eligible for up to $950 million in federal contracts over the next five years as the military decides which hardware and software to buy.