Skip to content
The cubesats in NASA's constellation TROPICS are expected to significantly improve weather forecasters' ability to foretell the tracks and intensities of tropical cyclones. TROPICS stands for Time-Resolved Observations of Precipitation structure and storm Intensity with a Constellation of Smallsats. Photo courtesy of Blue Canyon Technologies.
Expand Photo 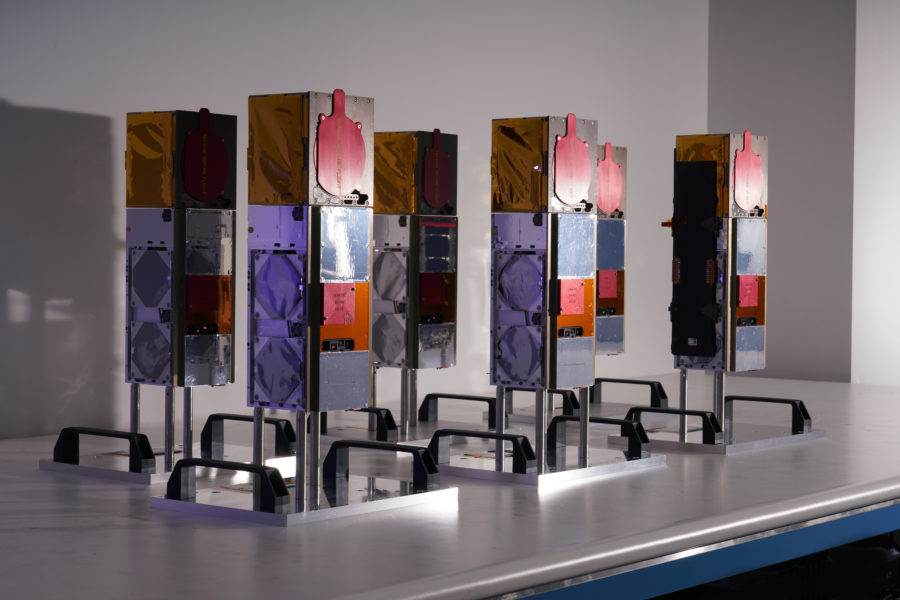 A Satellite Swarm May be the Next-Gen Hurricane Hunters

LAFAYETTE, Colo.—A mockup of a 30-centimeter-long satellite on a shelf in the lobby of Blue Canyon Technologies may not look like much, but it represents a new approach to weather reconnaissance that could one day render one of the Air Force’s earliest missions obsolete.

The three-unit, or 3u, cubesat’s real-life counterpart is already in orbit, itself a pathfinder, while in a workroom at Blue Canyon Technologies in August, technicians put together one of six that NASA plans to launch as a constellation in 2022.

For now, the Air Force Reserve Command’s 53rd Weather Reconnaissance Squadron—the “Hurricane Hunters”—flies WC-130J Super Hercules aircraft outfitted with weather gear out of Keesler Air Force Base, Miss., into and around tropical cyclones such as hurricanes to collect data on the location and intensity. The mission dates back to 1943 and started, according to the command, because of a dare between two Army Air Corps pilots. The squadron went to work in support of the National Hurricane Center as recently as Hurricane Ida.

These aircrews today place themselves in the “perfect temporal and spatial” situation to collect data, being right inside the storms, said William Blackwell, lead researcher for the TROPICS mission, short for Time-Resolved Observations of Precipitation structure and storm Intensity with a Constellation of Smallsats. But coverage from those airplanes is “very sparse,” Blackwell told Air Force Magazine in an interview. Unlike an airplane inside a storm, a satellite in space can record data about an entire hurricane all at once.

If all goes according to plan, the TROPICS mission could “substantially improve our ability to forecast tropical storms,” said Blackwell, principal investigator for the NASA-funded program and associate leader of the Applied Space Systems Group at Massachusetts Institute of Technology’s Lincoln Laboratory.

Existing satellites that detect visible or infrared light from low Earth orbit can’t “see” through the tops of clouds because those wavelengths don’t penetrate, Blackwell said.

The TROPICS pathfinder, on the other hand, has shown that it can, in effect, peer inside—”below the clouds, where it really matters,” Blackwell said. TROPICS detects longer-wavelength microwave radiation, which penetrates the cover and reveals clues about the storm’s intensity, including moisture and a core temperature anomaly that indicates the maximum sustained wind speed.

Polar-orbiting satellites that gather data for other agencies do observe microwave radiation—Blackwell estimated the satellites at “school-bus-sized”—and “then you have to wait six hours before the next one flies over.” Yet even adding in observations that international partners may contribute, “there’s still a big gap.”

Assuming the pathfinder continues to check out, the six-satellite TROPICS constellation will bring that “revisit” rate down from six hours to about 50 minutes, Blackwell said. A constellation of 24 could get the revisit rate down to about 6 minutes.

The $30 million mission includes the cubesats and a year-and-a-half of operations—a three-month commissioning period to get the satellites set up and checked out followed by a year of data collection and then three months of decommissioning at the end. If it works well, Blackwell could envision stretching out the operations to as long as three years.

TROPICS’ pathfinder cubesat made three passes over Hurricane Ida just before and just after the storm made landfall in Louisiana in August. The images show the hurricane’s “very clear structure” over the Gulf of Mexico and later when “the storm kind of dissipates” over land, Blackwell said.

“Initial images” released by NASA of Hurricane Ida detected at 205 gigahertz, one of the cubesat’s 12 channels, “lend a lot of confidence that the data we receive from the imager will be useful in characterizing a hurricane’s structure,” said NASA’s Patrick Duran, TROPICS applications lead at Marshall Space Flight Center, Ala., in a Sept. 3 release. “It’s really great to see how well the 205-GHz imagery represents Ida’s inner core.”

Blackwell said the rest of the channels are up and running now as well.