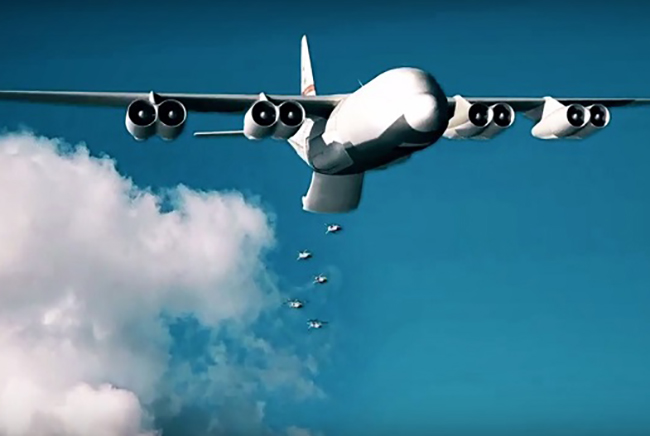 The Air Force is planning experiments and briefing senior leaders on progress toward its “arsenal plane” idea, looking at multiple aircraft options to fly with a large weapons cache to back up strike assets.

An arsenal plane would be a multi-engine platform that accompanies remotely piloted aircraft and fighter jets in combat and totes “network-enabled, semi-autonomous weapons,” according to a 2016 Air Force video. The concept has been around for years under the Defense Department’s Strategic Capabilities Office.

The idea “takes one of our oldest aircraft platform[s] and turns it into a flying launchpad for all sorts of different conventional payloads,” then-Defense Secretary Ash Carter said in 2016. “In practice, the arsenal plane will function as a very large airborne magazine, [and] network to fifth-generation aircraft that act as forward sensor and targeting nodes.”

While people have speculated that the B-52 bomber would make an ideal arsenal plane, Ray indicated mobility platforms could be in the mix.

“You have to go look at those options, if you believe you’ll have access to airlift assets to go do that in a time of crisis,” he said. “I’m not mentally there, I don’t see how that comes together.”

He added that Air Force acquisition boss Will Roper—a former SCO director—would be briefed on the program at the end of September. Bousie said she couldn’t provide any insight on those discussions.

“At the end of the day, there’s a little bit of learning going on,” Ray said. “It’s an easy thing to draw, a tougher thing to do.”

Could a mobility platform play the role of arsenal plane well? Todd Harrison, director of the Aerospace Security Project at the Center for Strategic and International Studies, believes it depends on what munitions the platform would carry.

“If it’s used for air-to-air munitions, then externally mounted weapons would be ideal. But many mobility platforms were not designed to handle external payloads, so it could require extensive modifications,” Harrison said in an email. “If the arsenal plane is intended to carry air-to-ground weapons, then they could deploy from the rear ramp of mobility platforms, which would not require extensive modifications.”

He argues a B-52 is a better platform because it offers space for munitions inside and on its wings, and can carry many at a time.

“An arsenal plane does not necessarily need to be stealthy or fast, but it needs to have a large payload capacity,” Harrison said.

Mark Gunzinger, director of future aerospace concepts and capabilities assessments at AFA’s Mitchell Institute for Aerospace Studies, agrees that turning to mobility or a commercial-derivative aircraft wouldn’t be practical when the Air Force could use B-52s or B-1s instead.

“C-17s will likely be in very high demand during the opening stages of a major conflict accomplishing their primary missions,” Gunzinger said. “It wouldn’t make sense to allocate them for strikes instead of using them to deploy forces into a theatre of operations. It would be even more difficult, and far more costly, to attempt to modify a commercial-derivative aircraft to carry a large number of weapons internally, depressurize for weapons releases, safely eject weapons, etc.”

This story has been updated to correct Mark Gunzinger’s title at the Mitchell Institute.