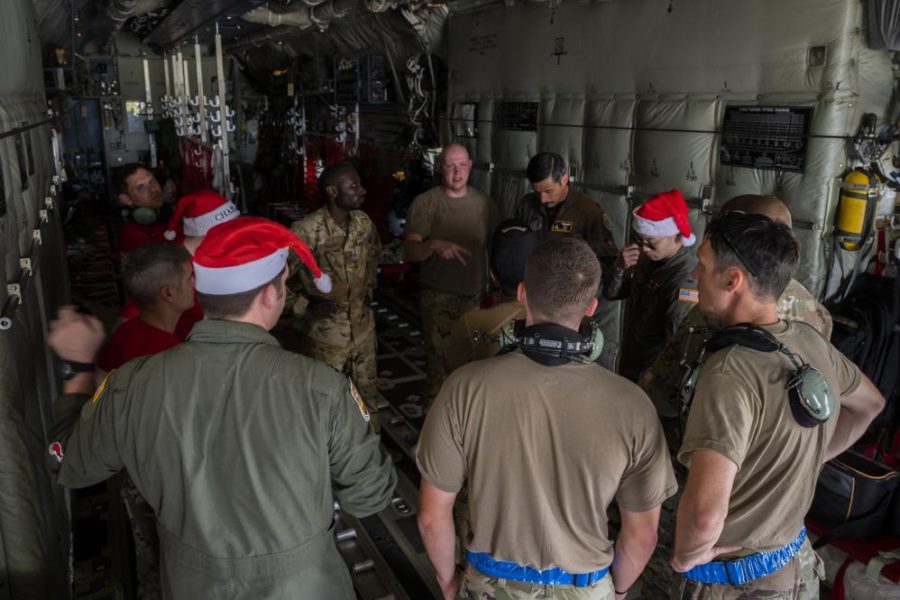 Operation Christmas Drop involved Airmen from the 36th Wing, 515th Air Mobility Operations Wing, and 374th Airlift Wing gathering, packing, and dropping pallets of supplies from C-130s to more than 55 remote islands in the southeastern Pacific, including the Federated States of Micronesia and the Republic of Palau.

The operation first began in 1952 when a B-29 aircrew flying over the island of Kapingamarangi, 3,500 miles southwest of Hawaii, saw islanders waving at them, according to a PACAF release. The crew dropped supplies attached to a parachute to them, starting an annual tradition.

In 2021, the Air Force and partner nations dropped some 25,000 kilograms worth of supplies, including school supplies, clothing, rice, fishing equipment, and toys, impacting about 20,000 people, said Capt. Dan Mumford, one of the C-130J pilots flying the mission, in an interview released by the 36th Wing.

“These islands are some of the most remote in the world. They may get a boat of supplies every 4 to 5 months, but there are no airports and little to no visitors,” Mumford said in the interview. “However, we do communicate with the islands through a system of ham radios, and although many do not speak English, the stories of excitement and gratitude that are sent back to us are touching. The thing that really got me was when I was told the children on these islands don’t believe Santa Claus flies a magical sleigh—he flies a C-130.”

Speaking at a ceremony to commemorate the start of Operation Christmas Drop at Andersen Air Force Base, Guam, on Dec. 5, Larry Raigetal recalled his childhood on one such island.

“I was curious where the toys were coming from, much less being fascinated with the Air Force guys standing in the C-130 and tossing down those boxes,” Raigetal said. “I wanted to find out where they came from. I wanted to know what the source was.”

Donated supplies are gathered from private donors, charitable organizations, and the University of Guam and sorted by volunteers before being packed into pallets, Mumford said. From there, crews execute low-cost, low-altitude air drops over the course of a week. And it’s not just a humanitarian mission.

“This training mission is not only a tradition but provides relevant and real training necessary for our Airmen and partner nations in the Indo-Pacific region,” Gen. Kenneth S. Wilsbach, Pacific Air Forces commander, said in a release.

Similar to last year, precautions were taken to lessen the risk of COVID-19. All pilots and aircrew were fully vaccinated; all volunteers handling donations wore face masks and gloves; and pallets were left untouched for hours before being closed.